It’s not been a good week for anyone that cares about constitutional – or indeed personal – niceties. It’s both horrendous to watch and painfully inevitable when politics has become about (unachievable) total victory. Once we’re shrugging shoulders at collateral damage (to the economy or political decency) we’re in big trouble. And in that we well and truly are.

The only silver lining is the Supreme Court ruling has cut short both main party conferences. Labour’s civil war/radical-policy-blizzard-themed event has come to a close, before the conference chaos ups sticks to Manchester for the Conservative Party’s party.

With my colleague David Willetts we’ll be discussing how the party might win back the under-45s on Sunday – a topic which this week’s Top of the Charts special picks up on. Spoiler alert – recreating the Vote Leave campaign in government is probably not going to work for woke millennials.

Boris Johnson is doubling down on his electoral strategy – ensuring this is a ‘People vs Parliament’ election at any cost. So committed is he that he’s prepared to fail most taste tests to achieve it. Even the Queen has been dragged in.

But politics isn’t just about the immediate. The election cycle often dominates, but longer term shifts also shape our politics – and here Boris Johnson is also doubling down on one: the age divides in our politics.

The importance of our age in determining how we vote has been building for some time – most noticeably this century. Older voters vote Tory. 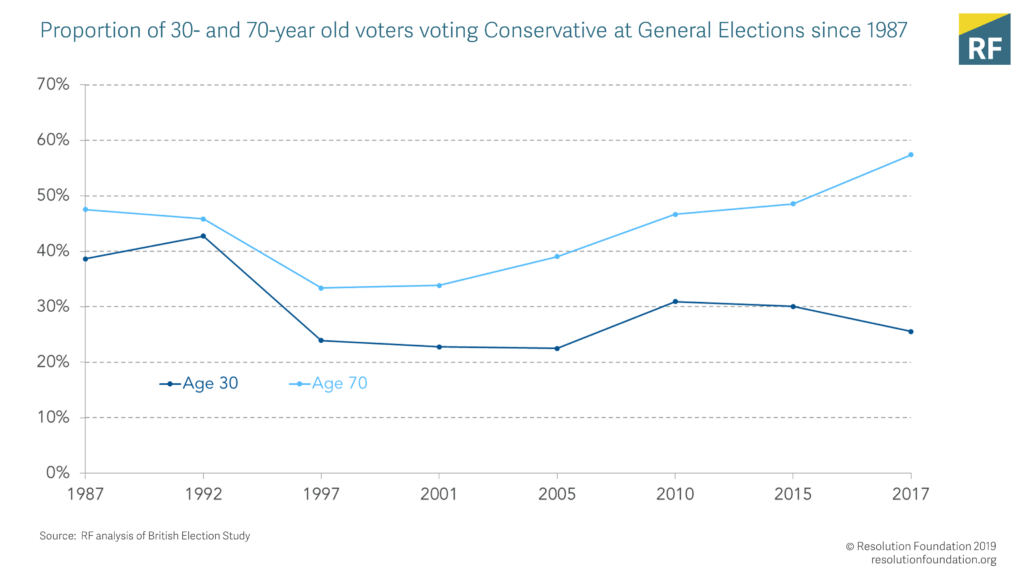 While the aftermath of the 2017 election rightly saw this age divide receiving more attention, the crucial point is that it’s been building for decades. Indeed over the last four decades, we’ve seen age gradually replacing class as a key determinant of people’s voting behaviour. The Conservative lead over Labour among ABC1 social groups has collapsed from 37 points in 1974 to just 4 points since 2017 (while Labour’s lead among working class voters has shrunk from 35 points to 3). In contrast, 70 year olds were twice as likely to vote Conservative as Labour in 2017 (with the reverse true for 30 year olds). 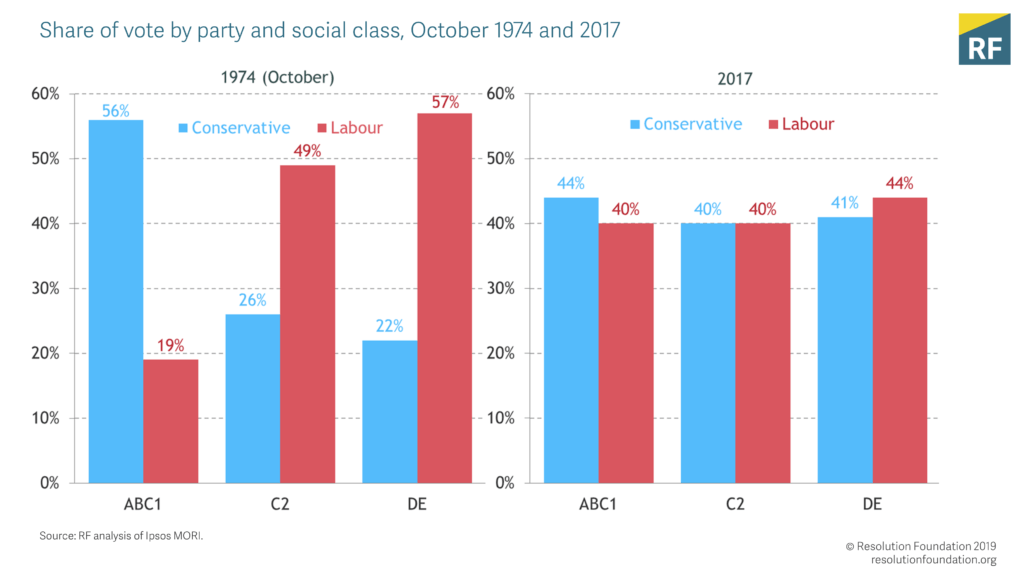 This is a huge change for our politics, posing a big strategic question for our parties – how do they respond? We’ve seen evidence of the Labour Party trying to bridge out of its reliance on younger voters – such as campaigning against the ending of universal free TV licences and announcing free social care at its conference last week. Notably, by funding these commitments by general taxation they are ensuring that the working-age population pays for them, rather than pensioners.

But what about the Conservative Party’s approach? Not surprisingly Brexit currently appears to be the first and last of what the Party is about. Impressively, this has meant finding an issue in some ways even more polarised by age than party voting, and then making it the defining dividing line of our politics. After all, people aged 24 and under were almost four times as likely to vote remain than leave, while the over-65s vote was 60:40 in the opposite direction. This is turbo-charging partisan age divides, rather than bridging them. 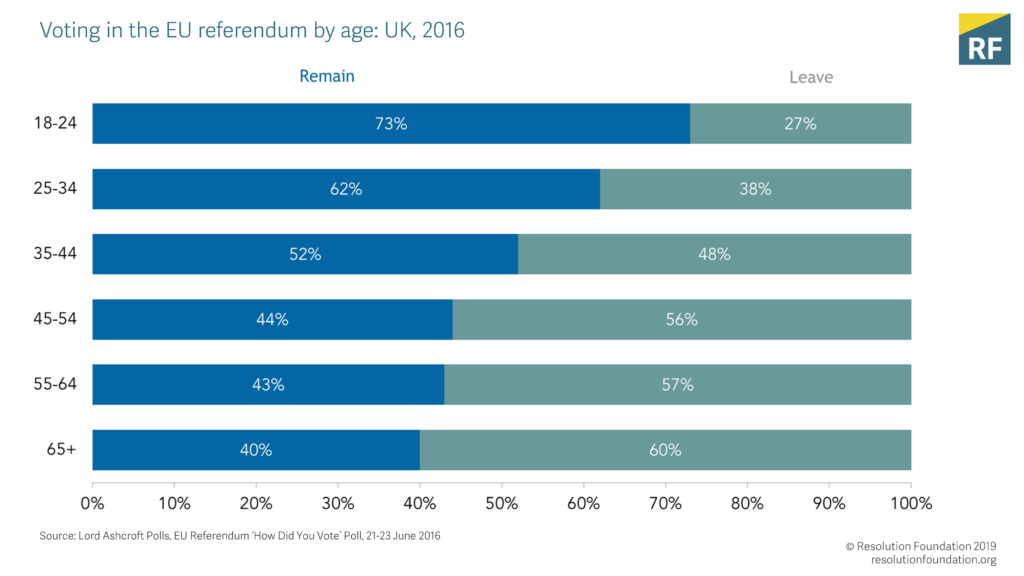 But the Conservative Party is not just about delivering Brexit, and Ministers will be lining up at conference to highlight their non-Brexit policies. We already know that Boris Johnson has put being tough on crime back up in lights – having announced £2.5bn for extra prison places, 20,000 extra police officers and greater use of stop-and-search powers. Now all age groups broadly favour tougher approaches on crime, but to whom is this message most appealing? The old of course. 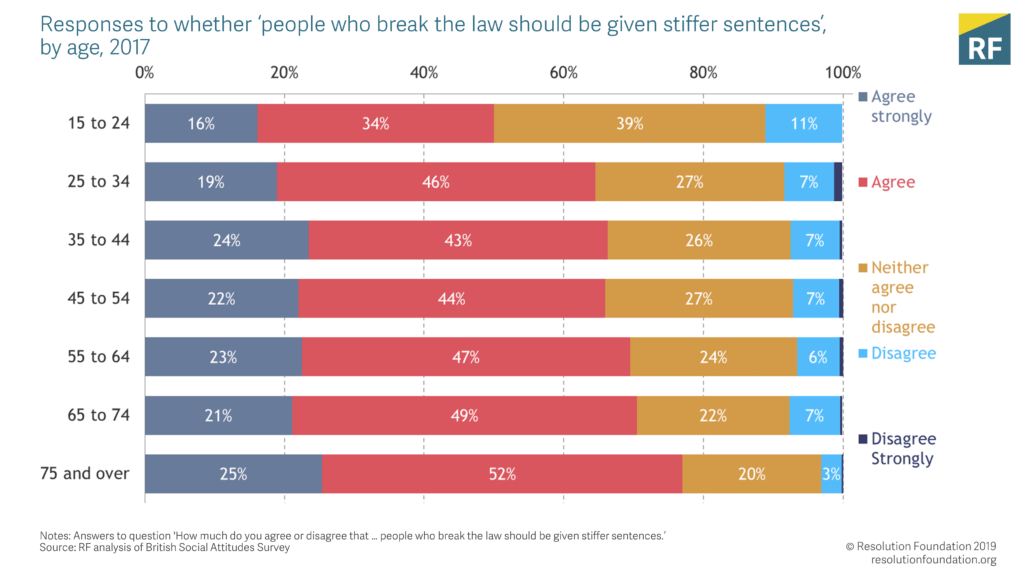 Not all policy areas are like this though. Schools received the biggest single cash injection in last month’s Spending Round – an issue most popular with young people and young families. People aged 35 and under are roughly twice as likely to put education as their top priority as those aged 55 and over. 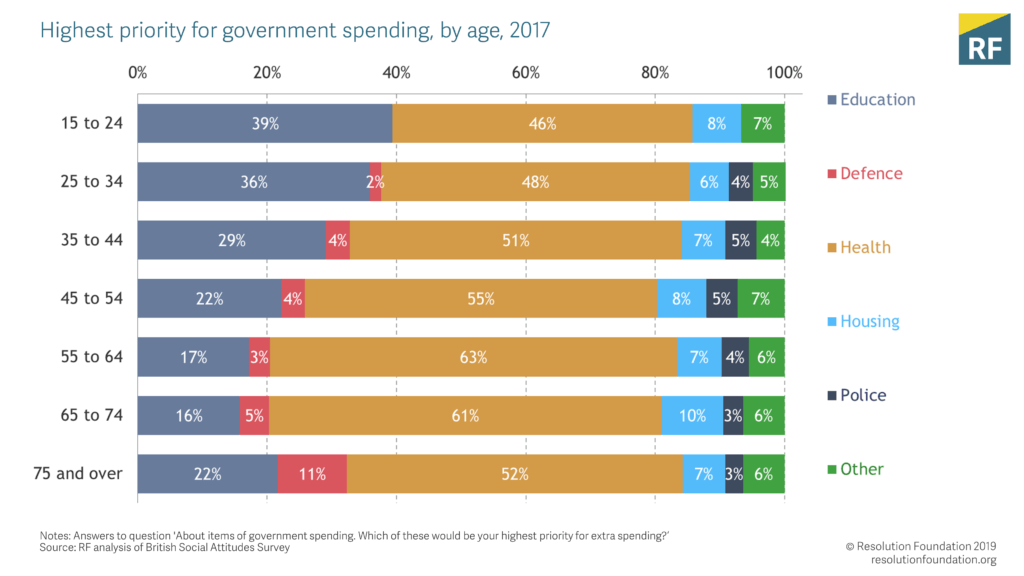 However, this is largely a defensive strategy, specifically trying to avoid a rerun of the 2017 election when school funding cuts regularly came up on the doorstep. There is little sign of a wider attempt to reach out to younger voters – housing and the environment haven’t had much air time because Boris Johnson’s approach to politics doesn’t involve spending time fighting the current culture war on the side of millennials.

Indeed the wider ending of austerity in last month’s Spending Round is, if anything, a message more in tune with older voters’ desires. Despite the common idea that the youth of today are in favour of a huge socialist state, it’s the old that are most likely to favour an increase in spending and taxation, following the austerity fatigue of the last decade. 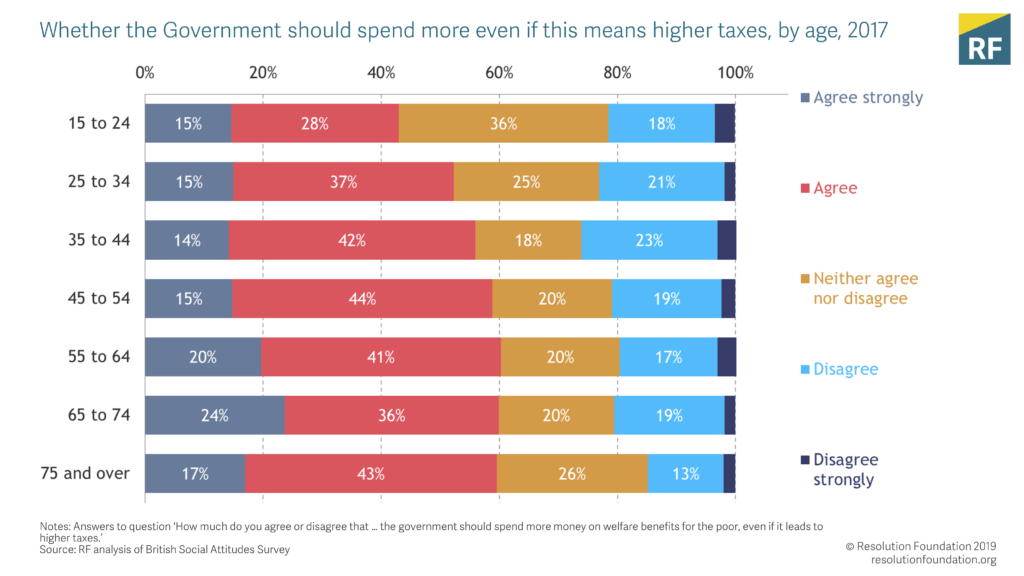 Boris’ (very) ambitious plans on tax cuts continue the theme. The Prime Minister’s £10bn of tax cuts for those earning over £50,000 are very top heavy – only the richest one in seven workers will receive any benefit from this policy. And they’re also middle-aged heavy. As IFS analysis shows, just 3 per cent of under 35s are set to benefit from Boris’ tax cutting plans, compared to 12 per cent of 35-54 year olds (and 7 per cent of over 55s).

Take all that together and it’s hard not to conclude that Boris Johnson is very much pursing a doubling down strategy when it comes to age. His is a Tory party reliant on older voters, and his approach is to make sure they get what they want – most obviously Brexit. Now this may well work when it comes to the next election. After all, over 70 per cent of those aged 45 and over say they are absolutely certain to vote, compared to barely 50 per cent of those aged 35 and under.

But while it’s a clear and bold political strategy, it also shows the Conservatives have given up trying to build a much bigger coalition. It’s hard to imagine Margaret Thatcher not looking to reach out for a broader base – there’s a reason the ‘right to buy’ council homes happened.

Maybe for the Conservative Party in 2019, and others more generally amid our current political turmoil, doubling down rather than reaching out is the best they can do. We can save healing the nation for another day.