Channel 4 (or at least some of it) is off to Leeds. Some staff may be relishing the move, some may have wanted to move to Manchester or Birmingham, while others may have just wanted to stay put. Despite the mixed feelings one thing is undisputed; Channel 4 staff are now part of an increasingly small group. The latest data suggests that the share of people relocating within their firm for work is at the lowest rate recorded since the eve of the financial crisis in 2007.

Previous Resolution Foundation research has drawn attention to the apparent decline in regional mobility. This article extends this research by drawing upon a different dataset, one that allows us to distinguish moves by people in the same, or different, job. We can see who is responsible for the decline in regional mobility and Figure 1 suggests that it is people in the same job. 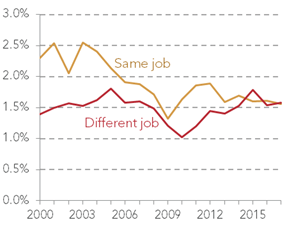 Are fewer firms expanding in London and the South East because of rising costs in and around the capital? No, we find no evidence that London has become a less attractive place to relocate to. Although within-firm regional job moves have declined across the country they have fallen the most outside London, the South and East. More people moved to London in 2016 than in any of the previous 15 years (although numbers have dropped off a bit in 2017), clearly Channel 4’s move to Leeds is the exception rather than the norm.

It could be that younger people today are less willing to relocate with their firm. Other data suggests that job to-job move rates have declined most for people under 30 and so perhaps what’s true about job-to-job moves is also true for within-firm relocation. On the contrary, the sharpest falls in moves have been for older workers remaining in the same job. Around 100,000 fewer workers 35 and over changed their region of work last year compared 2003, despite the fact that that the number of employees 35 and over increased by 200,000. Furthermore this isn’t about age; using data on total moves (not just those for employment) mobility rates for this age group are close to where they were before the crisis.

It seems that demographics can’t explain the shift, but structural economic trends might. It could be that firms are less likely to need people to relocate than they used to. It’s far easier to work remotely today than in the early 2000s. On the other hand it could also be driven by the fact that since the early 2000s the share of employees accounted for by the large firms in each sector has declined and so today it may be the case that fewer people work in large firms with multiple sites. Beyond these two broad trends there is also an interesting sectoral dimension; regional job switching has declined most in those sectors that have shrunk (or at least not expanded as fast).

For example the share of employees in finance and insurance moving region for work has fallen from a high of nearly 8 per cent in 2001 to below 4 per cent today. As a result financial job switchers have fallen as a proportion of total job switchers and financiers and insurers now account for just 3.5 per cent of jobs in the UK economy, down from above 4 per cent before the crisis. We see a similar pattern for wholesale and retail and construction.

On the other hand health and social workers are now more likely to move for work and represent a larger share of total employment than they did in the mid 2000s. Although the evidence remains tentative it would appear that sectors within which workers have tended to be more mobile have shrunk (or not expanded as rapidly) and workers within these sectors have a lower propensity to move. 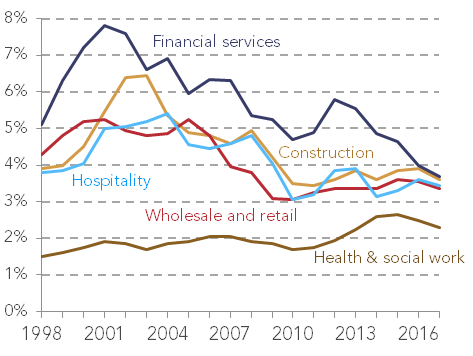 Although rates of regional job-switching have declined it has been difficult to understand if this represents a structural or cyclical phenomenon. The sectoral evidence suggests that the trend towards reduced mobility – at least for those remaining in the same job – could be structural. If so this would have significant ramifications for the UK labour market, though it will come as no solace for those at Channel 4 keener on the big smoke than West Yorkshire.