In Britain two crises are unfolding in parallel, while policy makers strive to keep count. On the first – the public health crisis – they are all too aware how many people are losing their lives due to the virus. On the second crisis – the economic one – the data is more limited, whether on the hit to incomes or the hit to jobs, though it is starting to come through.

We won’t know exactly how many people have lost their jobs due to coronavirus until at least the summer, when official statistics come out. But as well as monitoring the ongoing impact of the crisis, it’s equally important to consider the state of the country as the economic downturn hit home.

On Thursday we received new data on household savings in the run-up to the crisis. These statistics carry valuable lessons for policy makers working on Universal Credit (UC) and other aspects of the crisis response. They tell us how well-prepared household finances were for the crisis we are living through, before we even know how bad it truly is.

The new data comes from the latest Wealth and Assets Survey, a large audit of households carried out between April 2018 and September last year. People were asked how long they could stay afloat if their household lost their main source of income. Encouragingly, as Figure 1 shows, 56 per cent could manage more than three months. By contrast though, one in ten said their savings would not last them one week, a worrying statistic given the pace of job losses right now.

Figure 1: Without their main income source, a quarter of households could not make ends meet for more than a month 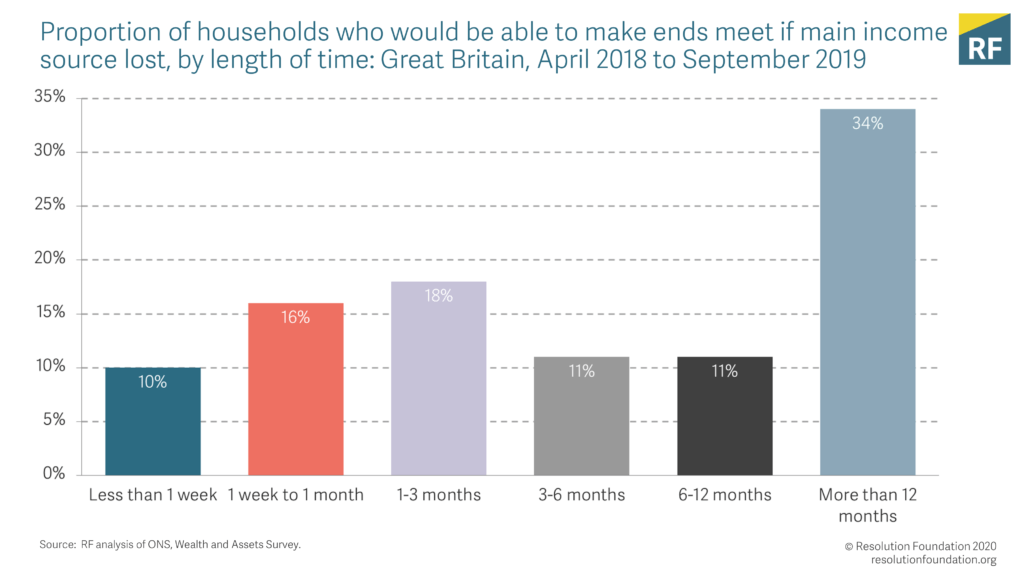 This data builds a broader picture of the financial precarity faced by many people even in relatively ‘good’ times before the crisis. More than one in three (38 per cent) said they run out of money before their next weekly or monthly paycheque at least once per year.

The survey also asked whole households about how they would cope with big hits to their employment income. Again, there were some reasons to be optimistic, since almost three-quarters of households thought they’d have enough savings to keep going if their income fell by 25 per cent. But even so, Figure 2 shows there are more than 4 million households across the country who don’t think they could cope with such a hit to their income – most of them being households on low to middle incomes.

Figure 2: Lower-income households would be most exposed to big temporary falls in income 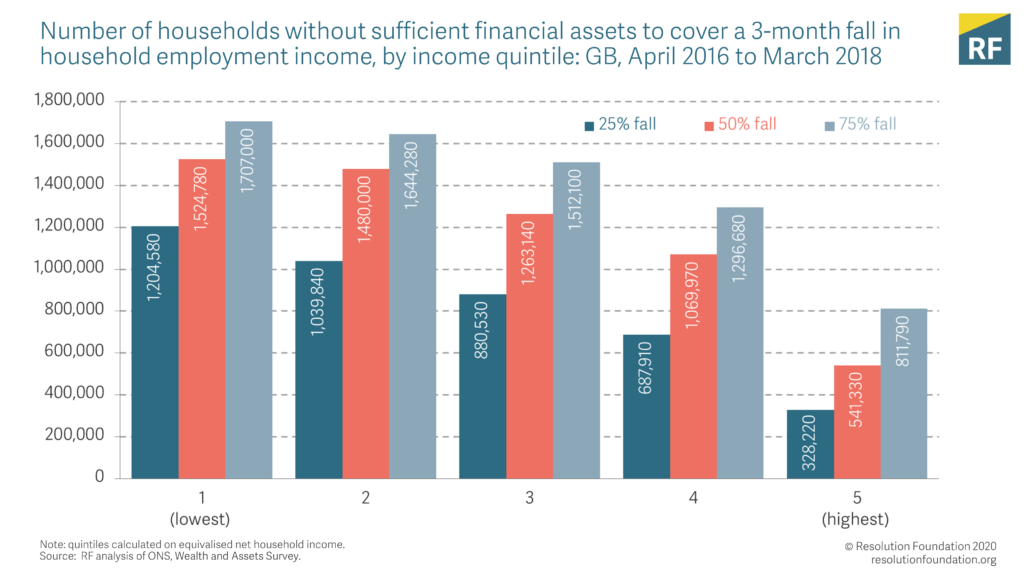 To their credit, policy makers have moved quickly to shore up incomes for many of those affected. The Chancellor announced the Coronavirus Job Retention Scheme two weeks ago, and similar schemes for self-employed people, plus a £7 billion boost to our social security safety net. More needs to be done for the people who don’t qualify for these schemes, but so far so good.

Where this week’s data is most important is for people facing another specific challenge: the Universal Credit asset test. Unlike the legacy system it replaces, UC applies an asset test to all applicants – including those who are unemployed – meaning that cash awards are reduced if people have more than £6,000 in wealth, and taken away if their wealth exceeds £16,000. The asset test means that people who lose their jobs in the next few weeks – but who have modest amounts of savings – will receive less (or even no) support than those without spare cash in reserve.

At present, many of those newly claiming UC will have few or no savings, and will be immediately struggling to make ends meet. But for others, the very savings that protect them from immediate hardship could also disqualify them from getting any extra help from government. This second group will be obliged to run down their savings over the course of the downturn, and both groups may resort to loans if the financial pressure gets too much.

What should the Government do to help? The first, obvious step is to take away the asset test, and do everything possible to encourage people to apply for UC. Second, it should provide more resources to the Department for Work and Pensions that is urgently processing the million new claims. And third, it needs to get money out to people faster. We know from the new survey data how much speed is of the essence: get money to people in a week and 90 per cent could make ends meet, while if money takes a month to get through then this number falls to less than three-quarters. The Government should speed up advance payments that go to people straight away, and delay the timetable for repaying them (and other legacy debts) by six months.

Amid the horror of the pandemic, and the legitimate fears of many families for their finances, it might seem frivolous to worry about statistics for the time being. But the lessons from the data are vital. They point us to new issues that the Government must fix. In a crisis, statistics can save livelihoods and save lives.