Hope everyone’s enjoyed the calmer week in politics. After last week’s Chancellor-related fireworks, losing a Downing Street adviser over a bit of eugenics chat is small fry. Things are so chilled across the pond that they’re focusing on films. Donald Trump doesn’t understand how Parasite can have won the top Oscar. Now he knows how the rest of the world feels about him winning the Presidency. He wants the good/slightly racist Gone with the Wind back… Obviously we’d take the good/slightly awesome Obama back anytime.

Next week policy land is heating up as the Budget run-in kicks in properly. So make sure you get through all this week’s reads over the weekend, before we top up your reading pile on Monday with a report on the big tax/spend/fiscal rule choices facing the Chancellor. You can watch the launch event on the interweb too.

Cry Me a River. Having mocked The Donald for his cultural nostalgia, our first read confirms that… music just isn’t what it used to be. More specifically today’s pop music is both sadder and angrier than in the past according to a recent study (write up) looking at the lyrics of every song making it into the top 100 chart since 1965. It finds an increase in words related to ‘negative’ emotions, and a decline in ‘positive’ words. The use of the word ‘love’ nearly halved over the past 50 years. Why? Maybe a bit to do with artists learning from each other, but mainly the authors conclude we’ve just got an unexplained preference for more ‘negative’ content – which thinking about it, brings us back to Trump…

Negative budgets. “Debt is important, but don’t forget the causes of debt” is a clear message from a new report from Citizen’s Advice (key findings). Offering us insights from the data compiled by CA debt advisers, it examines the budgets of 129,000 households that have come through their door. The key finding: a large increase from 32 per cent in 2016 to 38 per cent today of those approaching CA for help who had ‘negative budgets’ – where their incomes simply don’t cover key living costs and essentials. The result, unsurprisingly, is that people fall behind in paying their rent, bills or council tax. For these families we need to stop kidding ourselves that if only we sorted out debt regulation or costs their problems would go away – it’s the pounds and pence of their incomes that need sorting out. And no, freezing benefits for the last four years hasn’t helped.

History lessons. They’re valuable things. And with more than seven in ten of those in poverty living in working households, history lessons on policy attempts to reduce working poverty are particularly valuable. So everyone should take time to read through this comprehensive take on the history, impact and current generosity of in-work tax credits in the UK and the US by Mike Brewer (who, excitingly, is joining RF in March as our Deputy Chief Exec) and Hilary Hoynes. The key takeaway is that while the two systems are often spoken of as being similar there are HUGE differences. UK tax credits are much more (twice for two child couples) generous but go to much less of the population (31 per cent of families with children get in-work support here vs 55 per cent in US). So the US doles out less per person but doesn’t means test it as much – you get elements of their child tax credit even on incomes of $200,000–$400,000. What’s driving this difference? In part it’s how in-work systems interact with what we offer those out of work. The US offers very little support compared to us, accepting much higher poverty rates but requiring less by way of in-work support to make work pay. In the UK we need our more generous tax credits to give a clear incentive to work, but that means we end up with more means testing to keep costs down. Our system does a much better job poverty/inequality wise, but maybe as a result the US system has done a better job of keeping cross party support. Policy, like life, is about trade-offs.

German minimum. We talk a lot about the UK minimum wage in TOTCs, but recent research from UCL (write up) takes a look at the introduction of the German minimum wage in 2015. The old news is that the minimum wage didn’t damage employment. More interesting is the finding that it boosted productivity, importantly not via the route usually discussed in the UK (firms responding to higher wages by investing in tech) but by lower-wage workers moving to larger businesses that offered better employment and are higher productivity anyway. So good news for lower-paid workers and German productivity. Less good news for smaller business owners. A trade-off worth making.

Brave new world? The UK got a new migration policy this week, but also some new interesting migration research. It challenges the popular view that cultural assimilation of immigrants is slower than it was in the past (without passing judgement on whether this is a goal we should actually be pursuing). The research looks at the ‘Americanisation’ of the names given on birth certificates of the children of immigrants over two distinct waves of American immigration (from Europe in 1850-1913 and from Asia and Latin America in 1965- present). It concludes that after twenty years about half the difference in naming conventions between immigrant and non-immigrant populations disappears, and that the rate of this change was similar in both historical and present waves of immigration. And immigrants from poorer areas – usually who those throwing around accusations of slow assimilation are talking about – had far faster than average rates of Americanisation naming-wise then and now. It’s (yet another) good reminder that people are very often wrong when they say “this migration is different”.

It’s not even the Olympics, but we broke no less than five labour-market records this week – from a record employment rate to record numbers of zero-hours contracts. Outshining all of this was the very welcome and long-awaited return of record pay after a staggeringly long 12 years. Now, this record is supposed to be broken every month, but you’ll remember we’ve had this huge financial crisis/slow recovery thing. So to combine the good record-breaking news with the grim reality of the living standards disaster we’ve all lived through, Chart of the Week combines our return to record pay with what would have happened had pre-crisis pay growth continued. Answer – we’d be, on average, £141 a week better off. The stiff-upper-lipped Brits have tried to make up that lost ground by working more – and working longer hours. But a far better solution going forward is of course a return to rising productivity to drive sustainable pay increases. New Chancellor, old challenges… 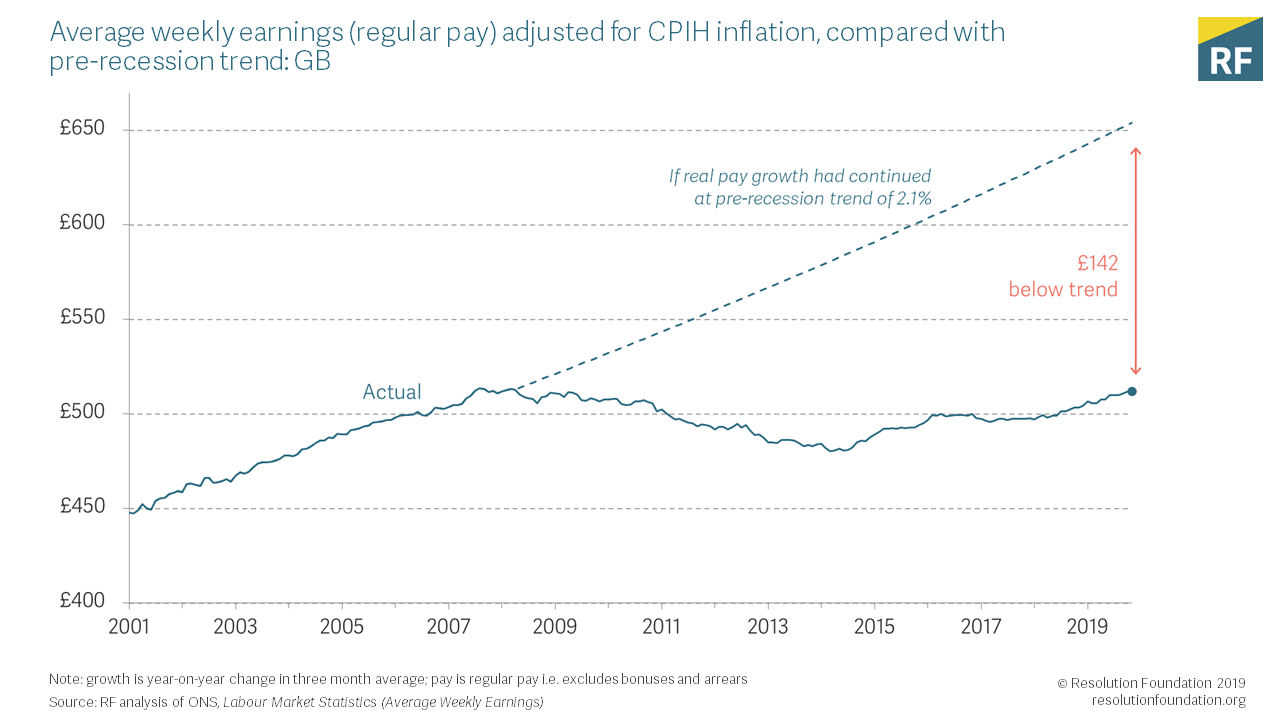