How can a government with a tenuous majority, an intra-party feud and Brexit uncertainty find the money to ‘end austerity’ on top of more than £20 billion a year it has promised for the NHS? The safe bet is that it won’t find anywhere near all of it in the Budget. This can – like so many others – will get kicked further down the road, until after B-Day. But the Chancellor can make progress on October 29.

At a minimum, the promised 2019-20 funding boost for the NHS (around £7 billion) can’t be dodged. The new fuel duty freeze (costing nearly £1 billion) must be funded, and if the government is serious about making a success of Universal Credit then there will be a price tag of several billion. On the other hand, the government has already announced that it won’t be abolishing Class 2 National Insurance for the self-employed (saving around £400 million a year). And deficit projections will be revised down, giving the Chancellor more wriggle room.

What else might – or should – the Chancellor do? Changes in personal tax rates – although a sensible way of raising money – seem unlikely. Meanwhile, completely reforming the country’s dysfunctional property tax or inheritance tax – as we’ve recommended – is even less likely in the short-term. But the Chancellor still has many options, as we show below, despite the parliamentary arithmetic.

Cancelling the planned corporation tax cuts would raise £6 billion a year by the end of the Parliament. That option is probably on ice while Brexit negotiations conclude but, given that the planned giveaway is no-one’s priority, a U-turn may prove irresistible sooner or later.

Quite possibly the Budget will look to raise significant sums by freezing income tax thresholds. The Conservatives have promised – but not yet funded – delivery of a £12,500 personal allowance and £50,000 higher rate threshold by 2020. But even freezing those thresholds after hitting those goals could raise significant sums by 2022-23 and 2023-24. As the chart below illustrates, without any policy change at all the personal allowance could hit £13,100 by 2023-24, due to it being uprated in line with inflation. So while a £12,500 personal allowance and £50,000 higher rate threshold would cost the government money in 2020-21, in 2022-23 sticking with those thresholds would bring in an extra £2 billion, and that figure would roughly double in the year after. 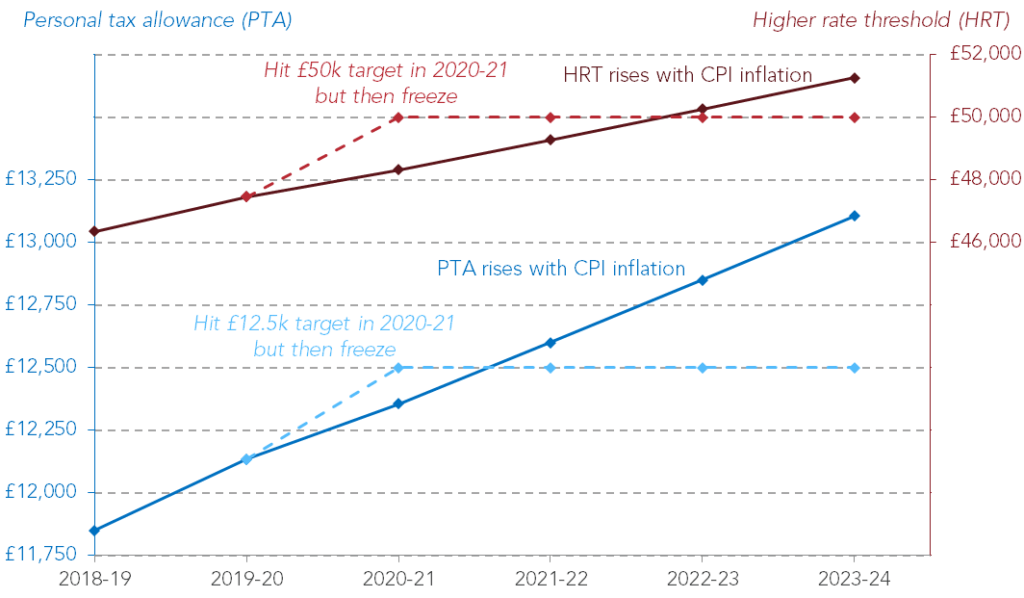 Following widespread concern about plastic waste, air pollution and global warming – and the success of the plastic bag charge – the time may be ripe for more environmental taxes. Any new plastic charges are likely to impact consumption more than the public finances. But changes to the Climate Change Levy or Carbon Price Floor could raise significant sums. The Treasury could announce restrictions to the £2.4 billion ‘red diesel’ discount – e.g. for mobile refrigeration – following a call for evidence about the impact of this tax break on air quality and the adoption of cleaner technology.

The Chancellor has also rightly noted that pension tax reliefs are “eye-wateringly expensive”. This system could be greatly rebalanced to favour low and middle earners, as the Intergenerational Commission suggested, through changes to rates of tax relief and the tax-free lump sum. But smaller changes, if any, such as lowering the £40,000 annual limit for tax-relieved saving now appear more likely.

And there are other tax reliefs where short-term action is unlikely – but where a call for evidence could help lay the groundwork for future change before the NHS cash is really needed. These include entrepreneurs’ relief (costing £2.7 billion a year), the National Insurance exemption for working pensioners (including Jeremy Corbyn and Vince Cable, incidentally, and costing around £0.9 billion a year), agricultural and business property reliefs for inheritance tax (costing £1.2 billion), the excessively generous treatment of inherited pensions (as explained in detail by the IFS this week), and the writing-off of capital gains tax at death (estimated to cost £1.2 billion a year).

The politics of tax rises in Brexit Britain with a government lacking a majority are clearly far from easy. But even if the big tax decisions are deferred the Chancellor has options available. He should make use of some of them, so we can at least begin to answer the question of how public services in the 2020s can be adequately funded.