An election is coming. You may have noticed. The early phase of any campaign is the contest about what the election will actually be about – where the battle lines will lie. You want it to be all about Brexit if you’re gunning for the Conservatives or Liberal Democrats, and everything but Brexit if you’re battling it out for Labour. But either way we know with certainty that underlying the tactical rows of this election will be a deeper divide: age.

While class dominated elections of the 20th Century, age has increasingly come to dominate in the 21st. Voters’ ages didn’t make much difference to which party they opted for back in the 1970s, but it has steadily moved centre stage in recent decades. By 2017 a 30-year-old was twice as likely to back Labour as the Tories and a 70-year-old was likely to prefer the Conservatives by the same margin. Come polling day, our age will do a lot of work in explaining who we vote for. 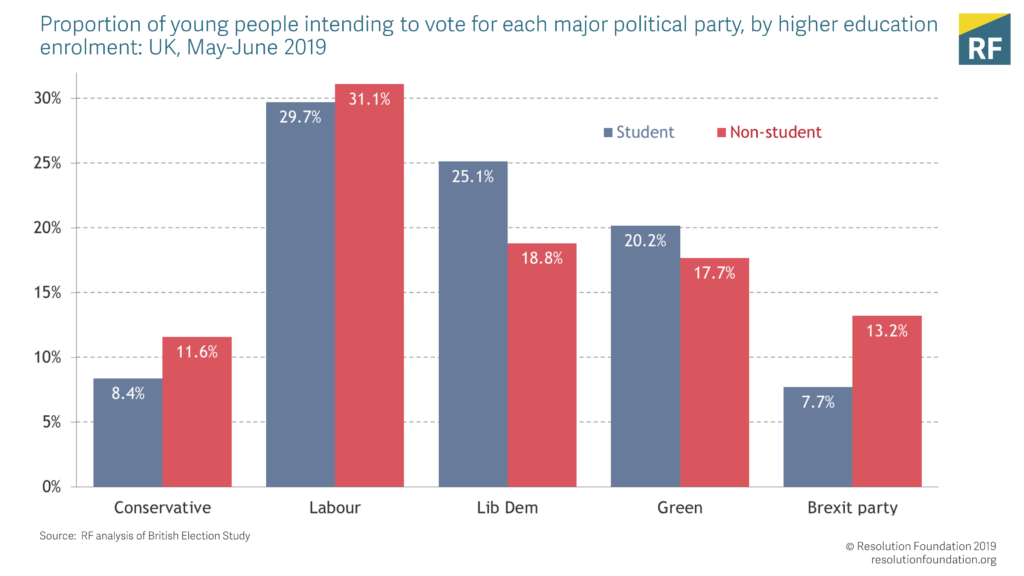 This is a much bigger deal than this week’s overdone row about whether that trip to the polling booths being set for 12th December risked students, who disproportionately vote for Labour and the Lib Dems, heading for the hills as term ends rather than doing their democratic duty. Spoiler – it won’t make much difference given that Christmas doesn’t come quite that early to most universities.

While politicians often focus on students (too many spent too long involved in student politics) it’s wrong to confuse the youth vote with the student vote. Just one in five 21-24 year-olds are students, and just one in twenty 25-29 year olds. Labour’s support among the youngest voters is pretty identical amongst students and non-students. It’s only the Lib Dems who do distinctly better among students, compared to non-students. The opposite trend is true for the Conservatives. Crucially, younger voters means people a lot older you’re your average student – in 2017 the tipping point age at which you become more likely to vote Conservative than Labour was 47.

Understanding the nature of the age divide in voting helps give clarity on many of the parties’ priorities. There’s a reasons the Conservatives prioritised pensioner benefits while cutting them for young low and middle income families. And for Labour, the three million parents bringing up children in the private rented sector – living with the insecurity that they could be asked to move out at a few months’ notice – are a big priority and outnumber the 2.35 million students. It’s also today’s 30 somethings who are living with the biggest ongoing hit to their wages from the financial crisis, in part because of the sheer bad luck of when they entered the labour market. Age divisions are not just superseding class in terms of their electoral significance, they are taking on more of a class feel to them by way of economic divisions.

This isn’t just about demography though – geography is crucial too. We are of course all getting older, both personally and nationally. But individual places – which are what matters in a constituency-based first-past-the-post system – are both very different ages, and are ageing very differently. Across the UK, over 60 local authority areas are older than Japan (the oldest country in the world). In contrast, other parts of Britain are demographically closer to young Latin America, with 23 local authority areas younger than Chile. The average Oxford resident is, at 29, barely half the age of someone in North Norfolk, the oldest place in Britain with an average age of 54.

More importantly, Britain is growing apart as it ages. Older, rural areas like Maldon, Eden and Richmondshire have aged twice as fast as the rest of the UK since 2001, while at the other extreme some cities have actually managed to get younger in the last two decades. Nottingham has lost three years while all of Newcastle, Coventry and Bristol are defying the ageing process.

Older areas are ageing quickly because there aren’t a lot of babies being born in places without many women of child bearing age, while younger places are seeing migration from within the country and abroad holding down their average ages. And yes universities are bringing in students to keep many cities younger.

Combine this demographic divergence with the growing role of age in determining which party we vote and you begin to see the shifting electoral battlegrounds over which the current election will be fought. Old and young seats are becoming the new safe seats for the Conservatives and Labour respectively, just as old and young voters are becoming their core supporters. The middle aged, not the middle class, are the new swing voters. 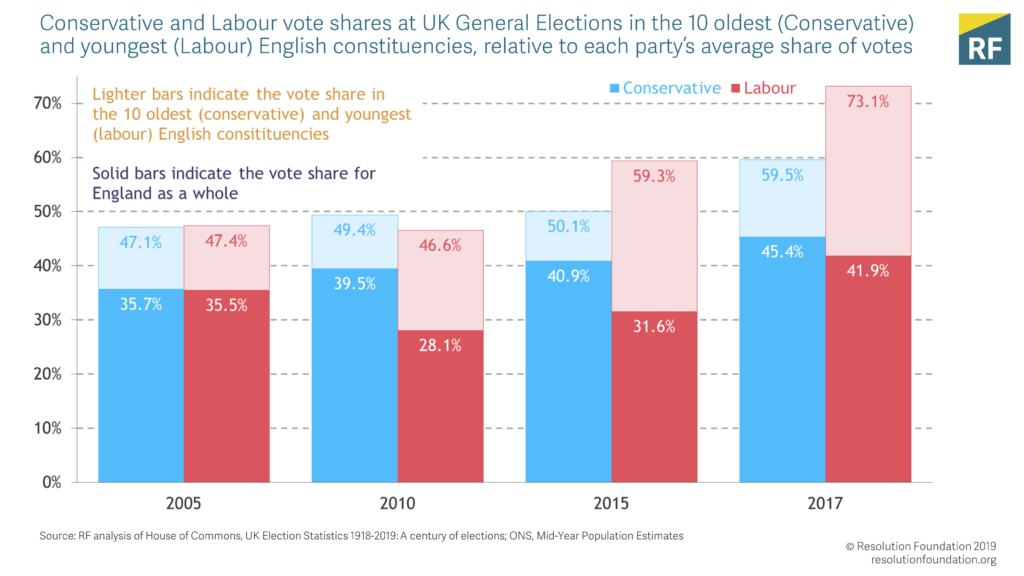 So age is going to be central to this election – and many more to come. That’s what really matters, not whether a few universities happen to have wrapped term up before polling day.

This article originally appeared in The Guardian.