As if Philip Hammond’s job over the next few weeks wasn’t tough enough already, the Office for Budget Responsibility (OBR) this morning has published its thinking on how Brexit will make his life harder for many years to come. Already charged with “ending austerity” (which, as Torsten pointed out last week, is a stretch to begin with) the OBR has set out how uncertainty about Brexit will hang over the government’s approach to the public finances for quite some time.

To date, the OBR has only built in a limited set of Brexit-related impacts into its forecasts. Assumptions about an orderly departure and a fiscally-neutral divorce bill (with any reduction in the UK’s contribution to the EU – which it estimated to be around £13.3 billion in 2022-23 – assumed to go into other spending) mean that the main assumed impact so far has come through the short-run effect of higher uncertainty on investment. The OBR has still made a chunky markdown to its forecast however: real GDP growth between 2016 Q2 and 2018 Q2 was reduced from 4.4 to 3.0 per cent in the aftermath of the referendum. The OBR link this weaker outlook following the referendum to the weakening in UK growth relative to other G7 countries, as highlighted in its chart below. 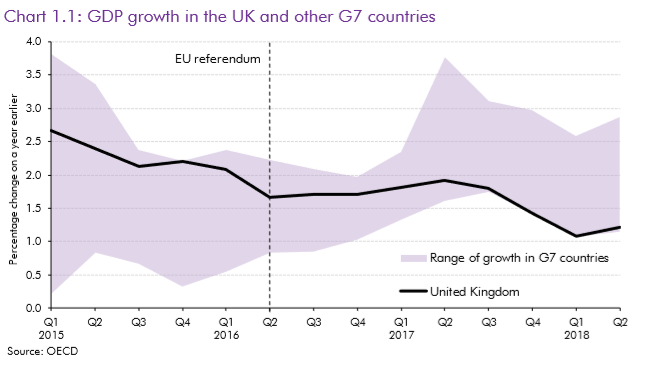 Today’s paper highlights a number of ways in which future developments might impact on the fiscal outlook. So what has it said?

First, the big one: what happens in the unlikely event of a ‘no-deal’ Brexit? Here the OBR quite rightly emphasise the uncertainties but do say that a disorderly departure “could have a severe short-term impact on the economy”.

But even with a deal in place, the OBR shows that the public finances may be adversely affected in a number of ways. These include through the future impact on trade, migration and other considerations, including any further payments to the EU. The OBR stops short of quantifying the impact of these factors, and again emphasise that they are (surprise, surprise) uncertain. But there is at least the potential for a further deterioration in the fiscal outlook. The OBR notes, for example, that “other things being equal, the greater the barriers to trade and migration flows with the EU as a result of Brexit, the more adverse the prospective impact on the economy and the public finances”.

The OBR admits a big assumption will be how Brexit impacts the supply side. On this, they have only really considered shorter-term factors – such as the impact of uncertainty on investment. One way that might prove to be wrong is if there is a big long-run impact of lower trade on the supply side. Here the OBR continue to be more doubtful about the link between productivity and openness than other studies (see for example: HMT, LSE, Bank of England).

What does all this mean for this month’s Budget? Not much, is the short answer. The OBR has said it will not be making significant changes to its Brexit assumptions in its 29 October forecasts. The OBR will instead incorporate these into its forecasts as negotiations unfold, and the shape of the new arrangement becomes clearer. Here the OBR notes ominously that “the full transition would take more than ten years”. This means that, for the next few years at least, the Chancellor may well have to live with the OBR being a foe rather than a friend when it comes to the task of “ending austerity”.