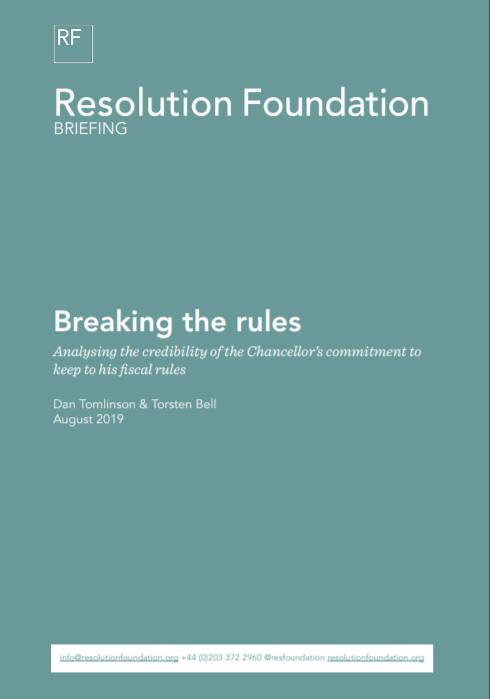 The Chancellor is shortly to deliver the first spending round (SR) of the post-austerity era. Although he is only setting departmental budgets for 2020-21, this event will mark a turning point  in our political and economic debates as it brings to an end almost 10 years of austerity.

The politics of this SR are relatively straightforward. The Chancellor will lay the ground for a potential election by demonstrating that the government has caught up with public opinion and announce that the era of significant public spending restraint is over. This political approach is also economically sensible. The deficit is at a 17-year low and the cost of government  borrowing is at an all-time low. But there are reasons to doubt the economic wisdom of how the government is going about next week’s turning on of the spending taps.

Primarily this is because the increase in spending that will be announced by the Chancellor will very likely be inconsistent with the fiscal rules he says he is committed to. He might be able to afford more borrowing, but it’s not clear that he can afford, or should choose, to hit the government’s economic credibility by knowingly setting policy that is very likely to break the rules he says he wants to stick to. Deteriorations in the public finances and economic outlook, alongside spending commitments the Prime Minister has already made, lead us to conclude that far from any further headroom to spend, the Treasury is already on course to break the ‘fiscal mandate’ of borrowing less than 2 per cent of GDP in 2020-21. In addition, with spending
commitments building in subsequent years, it’s likely that borrowing will only further overshoot this limit in the years after 2020-21.

The economics of announcing such increased spending before it is clear on what basis the UK may leave the EU is also highly questionable. The impact of different Brexit scenarios
on the size of our economy should help policy makers decide how much we can spend on public services. The potential for a no-deal Brexit also means that government should be
evaluating the impact of additional spending on supporting the economy in a disruptive period. The timing of this SR means neither will be possible.

Where does this leave us? It seems likely that the Chancellor will tell us on Wednesday that he will use up most of a £14 billion of headroom for 2020-21 on additional spending, despite knowing that the true size of any headroom is much smaller than this. The additional spending is desirable and might be good politics today, but the way it is being done is not ideal for the government’s economic credibility. If we do leave the EU with ‘No Deal’ in a few weeks’ time, that credibility will be more needed than ever.