As we come to the end of a year like no other, the outlook for the labour market remains mixed. At the beginning of this month, the second national lockdown came to an end, non-essential retail and hospitality businesses (in most of the country) were allowed to reopen, and recent weeks have brought official approval and rollout of the first coronavirus vaccine. The outlook for the economy and the labour market remains bleak in the medium term, however, with unemployment continuing to rise in the latest data, Covid-19 cases increasing, and social distancing restrictions expected to continue into the middle of next year.

November was a big month for official economic forecasts. At the beginning of the month, the Bank of England’s Monetary Policy Report projected that employment would peak at 7.75 per cent in 2021 Q2 – later than it expected in August due to the extension of the Job Retention Scheme, but still reflecting significant outflows from employment to come when Government support is wound down. In late November, the Office for Budget Responsibility (OBR) published its latest Economic and Fiscal Outlook, which painted a far less pessimistic picture than their July scenarios, when the central scenario had unemployment reaching 12 per cent in the middle of next year. They now expect a very similar peak to the Bank (7.7 per cent in 2021 Q2), but with unemployment falling more slowly. The OBR have also revised down their pay expectations compared to their March forecast, with inflation-adjusted earnings now expected to be 3.4 per cent (or £1,200) lower by 2025 than the March forecast.

The Chancellor also announced three key labour market policies in November’s Spending Review. The welcome (though ambitious) new Restart scheme will help the long-term unemployed find work. The National Living Wage will rise by 19p next April – its smallest rise since 2013, though still leaving it on track to reach two-thirds of typical hourly pay by the middle of the decade – and extended to over-23s. And finally – the focus of this Outlook’s spotlight – the Chancellor announced a pay freeze for some public sector workers.

Our Lifting the Lid section looks in more detail at how much of the recent pay growth is due to compositional effects, the rise in young people in full-time education since the start of the crisis, and regional changes in economic activity.

To protect the lowest earners, the freeze excludes those with a salary below £24,000 (who will receive ‘at least £250’), as well as NHS workers in recognition of their work throughout the pandemic – although small increases will represent a real pay cut for many. This echoes the 2011-2013 pay freeze, when the newly-elected coalition government set pay awards to zero for all but the lowest-paid: over that period, full-time public sector workers staying in the same organisation saw average pay growth of just 1.8 per cent a year (in cash terms) over that period, compared to 4.3 per cent a year on average between 2005 and 2010.[1] Despite the exemptions, many non-NHS key workers are set to have their pay frozen next year (all qualified teachers, for example, will be subject to the freeze), as well as part-time workers whose full-time equivalent salary is over £24,000 but who earn less in practice (8 per cent of all those affected by the freeze).

Figure 1: Average weekly earnings are higher in most of the public sector than in the private sector 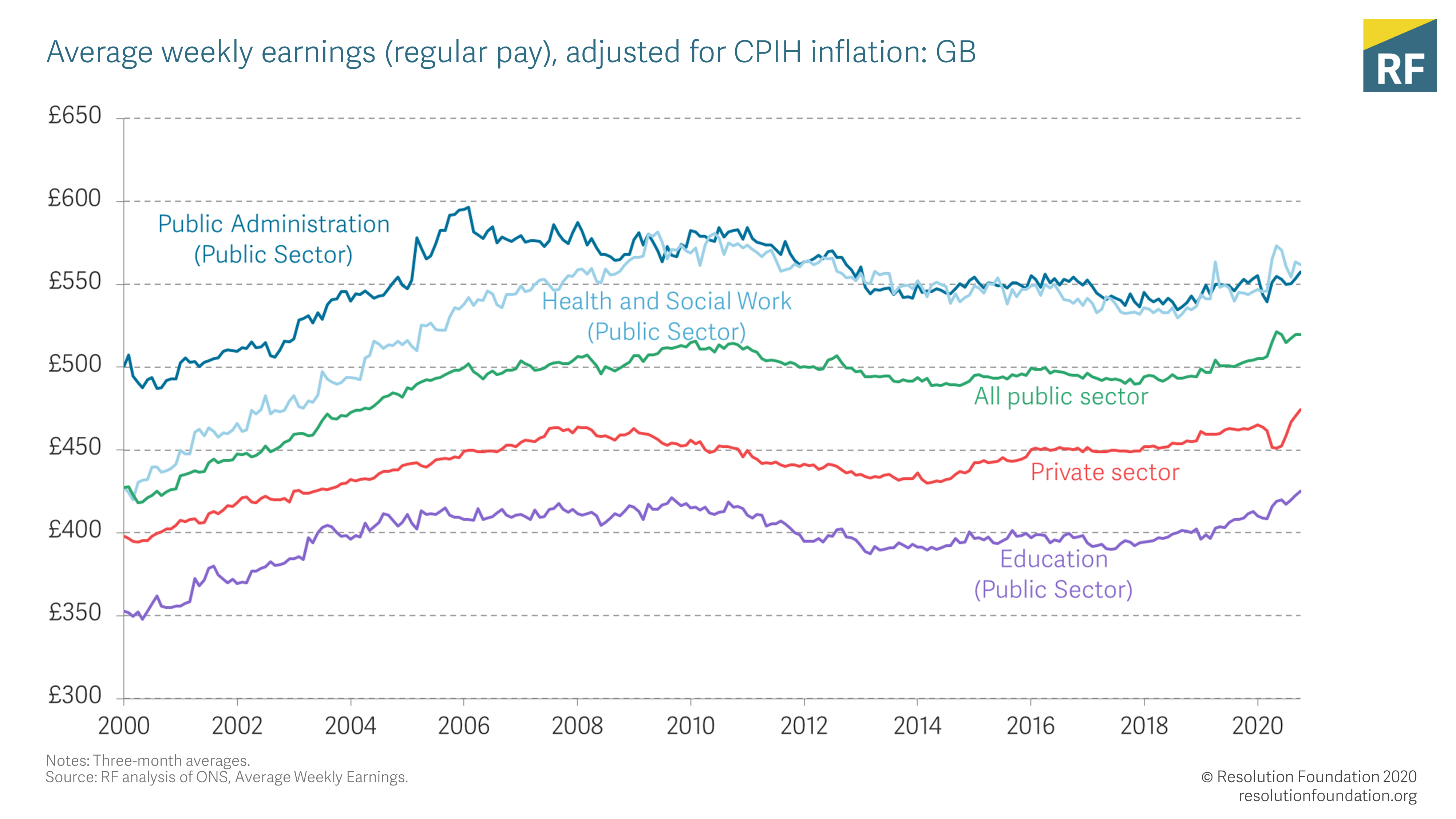 Does this gap justify the pay freeze? Some of the pay difference between the public and private sectors is explained by differences in the types of workers that work in each sector. The exact value of the remaining public sector pay premium, after adjusting for observed characteristics, depends on how it is calculated, but on all measures the premium has declined over the past decade, and the Institute for Fiscal Studies estimates that it fell to zero in 2019. And those that are affected by the pay freeze actually face a public sector pay penalty: the average worker in this group earns close to 8 per cent less than comparable workers in the private sector, as Figure 2 shows.[3] On the other hand, those not affected by the pay freeze receive a pay premium of 6.7 per cent, which is almost entirely driven by the lower earners in the group (likely linked to the fact that the private sector employs far more people at the wage floor and on very low pay). Non-wage benefits also have a part to play, though. Public sector pensions are much more generous, and public sector workers have benefited from greater job security during the pandemic: in September, public sector workers were around half as likely as private sector workers to say they were worried about losing their job or for their employer to have announced redundancies (16 per cent and 30 per cent respectively).[4]

Figure 2: Those affected by the pay freeze earn less than comparable workers in the private sector 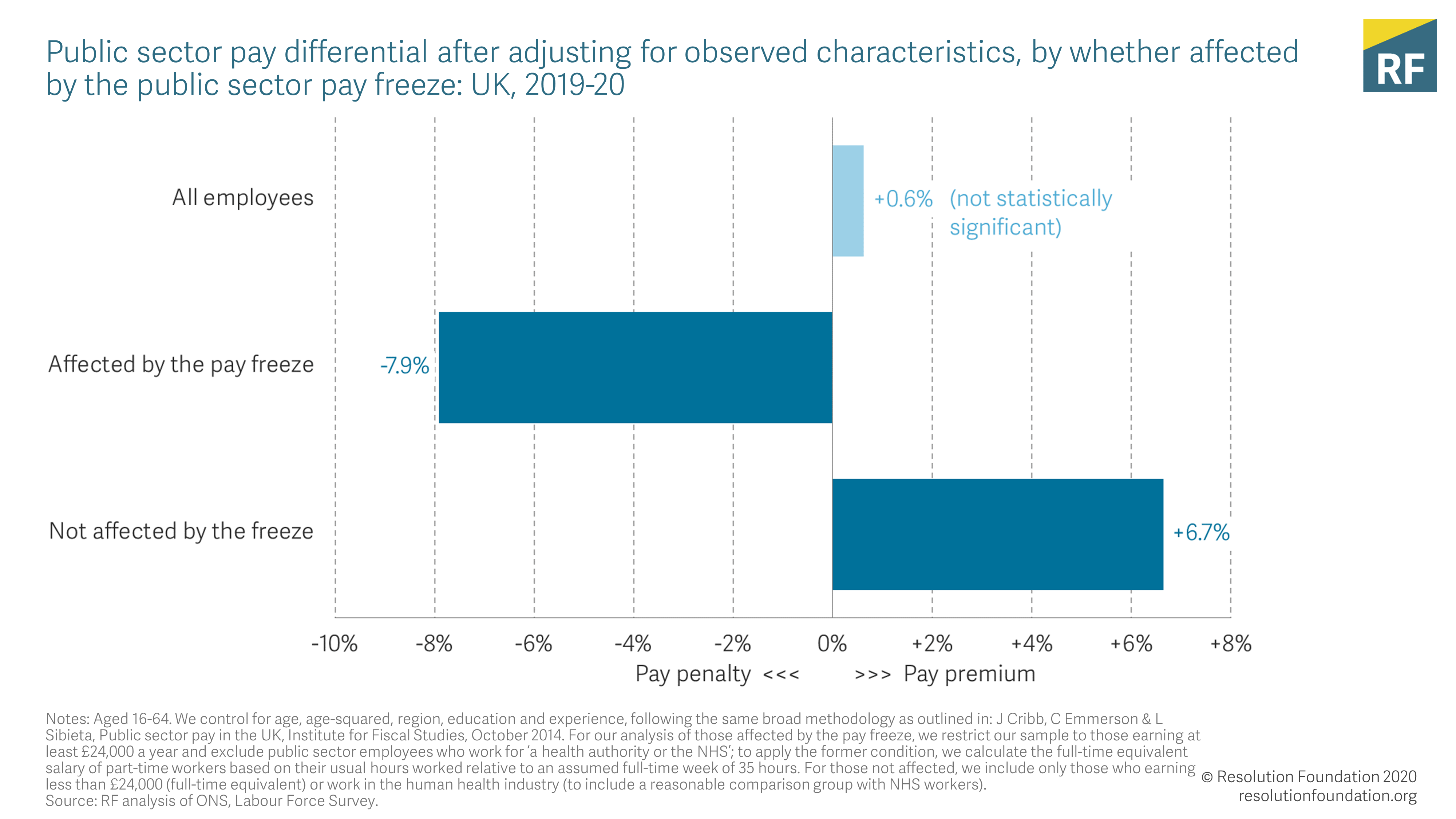 The exemption for the lowest earners also goes some way to soften the impact of the pay freeze on living standards. Although earnings do not always correlate with household income, Figure 3 shows that those affected by the pay freeze have a typical household income 28 per cent higher than either workers in the private sector or those impacted by the freeze. Similarly, the pay freeze will have a relatively small impact on low-to-middle income households: just 4 per cent of low-to-middle income families contain someone whose pay will be affected by the freeze, compared to 12 per cent of higher-income families.[5]

Figure 3: Those affected by the pay freeze have relatively high household incomes 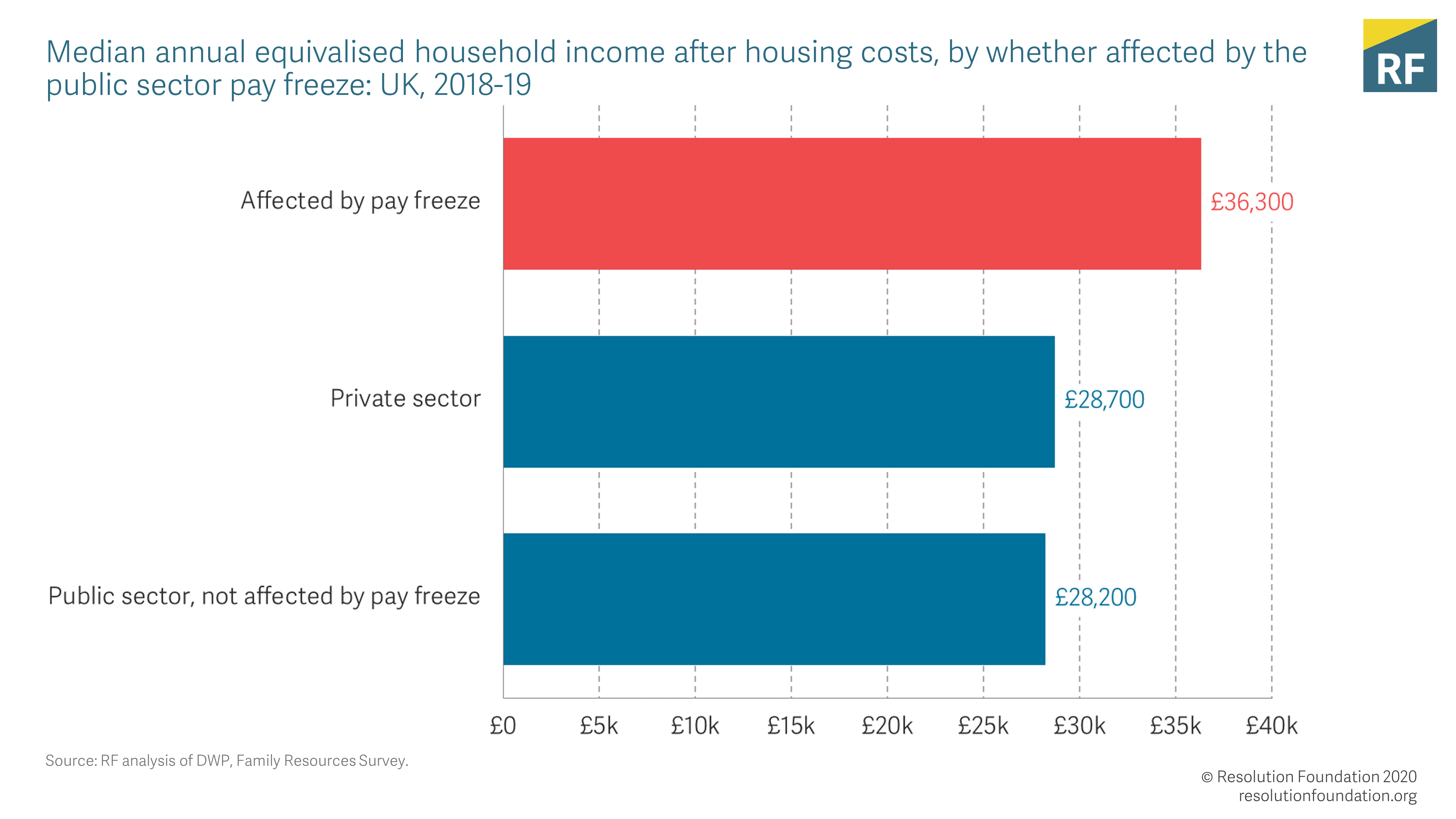 Looking ahead, the crisis has driven two key changes that make the case for public sector pay restraint over the next year. First, pay in much of the private sector looks set for stagnation next year. In its recent report, the Low Pay Commission shows that there has been a significant increase in pay freezes, increasing from 5 per cent to 20 per cent between 2019 and 2020; similarly, data from Incomes Data Research suggests that pay freezes have become five times more common in 2020 compared to last year. And second, in the face of higher public spending on Covid-19 support measures, the Chancellor has announced a £10 billion reduction in normal (non-Covid-19-related) public service spending next year. With pay making up more than a fifth of total public spending, it is perhaps unsurprising that a pay freeze has been proposed as a way to cut costs – effectively transferring money back to taxpayers, who are poorer, on average, than those affected by the freeze (Figure 3).

Decisions about public sector pay, however, should take account of the wider economic context. While public and private sector pay do tend to move together in the longer term (and it is right for that trend to continue), April may not be the right time to bring public sector pay back in line with the private sector given ongoing weak economic conditions. From a fiscal policy perspective, the Government should be increasing spending power to boost demand during the recovery, rather than reducing it.

Any longer-term public sector pay restraint could also exacerbate existing recruitment difficulties, and so the quality of public services: the Government needs to set public sector pay to recruit both the number and quality of staff they need. Recruitment challenges may well be smaller in the aftermath of the crisis while unemployment remains high – but pay is nonetheless important for attracting the right people. And there are already recruitment difficulties in some parts of the public sector, such as education, as well as the publicly funded social care sector. (While the majority of social care workers are employed by private sector contractors, and so are out of scope of this pay freeze, their pay is nonetheless determined by Government policy.) Less than half of frontline care workers are paid the real Living Wage, contributing to a vacancy rate of over 7 per cent. Looking ahead, the Government will need to improve pay (and conditions) in social care, alongside other parts of the public sector, to resolve longer-term recruitment issues.

[1] This figure tracks changes from the second quarter of one year to another and includes employees who worked in the public sector and worked full time in both periods. It excludes public sector workers who moved organisations but includes those who got promoted within the same organisation. Source: RF analysis of ONS, Five-Quarter Longitudinal Datasets.

[2] It is worth noting that pay growth in the private sector may be less positive than it appears: rather than workers getting pay rises, it may reflect compositional changes in the labour market if lower-paid workers are more likely to lose their jobs, leaving the average employee still in work higher-paid. See: N Cominetti & H Slaughter, Low Pay Britain 2020, Resolution Foundation, September 2020.

[4] Refers to the share of respondents saying they were anxious that they will lose their job over the next three months, whose employer has announced that they are considering making redundancies or a that a redundancy consultation is happening, or who have been told that they will be made redundant. Base = all UK adults aged 18-65 years with an employee job (n=3,645). Base by categories: private sector n=1,755; public sector n=1,515. Fieldwork was carried out online by YouGov Plc between 17-22 September 2020. The figures have been weighted and are representative of all UK adults (aged 18-65) according to age, gender and region. These figures have been analysed independently by the Resolution Foundation. Source: RF analysis of YouGov, Adults Age 18 to 65 and The Coronavirus (COVID-19) – September wave.