Welcome to Housing Outlook Q1 2021. In this Spotlight we consider the impact of the Covid-19 crisis on the supply of new housing. While construction sites have generally been allowed to operate throughout the pandemic, output was still severely constrained in the first half of 2020. While there was some pick up at the back end of the year, there are a number of reasons to think that house building will remain suppressed at least in the medium term.

To begin, while house prices may not yet have taken a tumble, some fundamentals suggest that their growth could stall, or even go into reverse. The experience of previous recessions indicates that this would have a significant impact on both the appetite, and ability, of construction companies to proceed with new developments.

At the same time, although the social sector may be less exposed to the market, its ability to play a counter-cyclical role is constrained by its level of grant finance. Furthermore, outward migration could leave a dent in the construction workforce, an effect that will be most keenly felt in the capital.

It is clear that the house building industry has not been hollowed out by the Covid-19 crisis in the same way it was after the financial crisis, reflecting stronger balance sheet for its biggest firms. However, the industry faces serious headwinds as a result of the pandemic. This leaves the Government’s target of building 300,000 new homes each year by the mid-2020s looking ever-more unrealistic.

Boosting housing supply remains a critical plank of the Government’s policy agenda: in December last year, the Housing Minister reiterated the ambition of ‘building at least 1 million new homes by the end of the Parliament, and an average of 300,000 homes a year by the mid-2020s’. But times have clearly changed since this commitment was written into the Conservative party manifesto in 2019. In this Spotlight, we assess the realism of the Government’s house building target given the significant impact the pandemic has had on housing delivery in 2020, and the real possibility that it will frustrate house building over the medium term.

To begin, it is worth remembering that even prior to the pandemic, building 300,000 new homes a year was a stretch target. As Figure 1 makes clear, there have been just six post-war years in which that level of output was surpassed, all in the heyday of social housing. While new builds have picked up pace in recent years (and additional dwellings from other sources which contribute to the target have also swollen supply), Covid-19 has clearly put a significant crimp on output in 2020. Although construction sites were allowed to operate in England and Wales throughout the pandemic (in contrast to Scotland), many builders chose to suspend operations in the early stages when guidance on workplace safety was unclear. As a result, MHCLG quarterly returns show that in the first three quarters of 2020, just under 96,000 new homes were built in England. While these figures are preliminary, they still suggest the final total will fall far short of the number required for the Government to be on track to achieve its house building target. 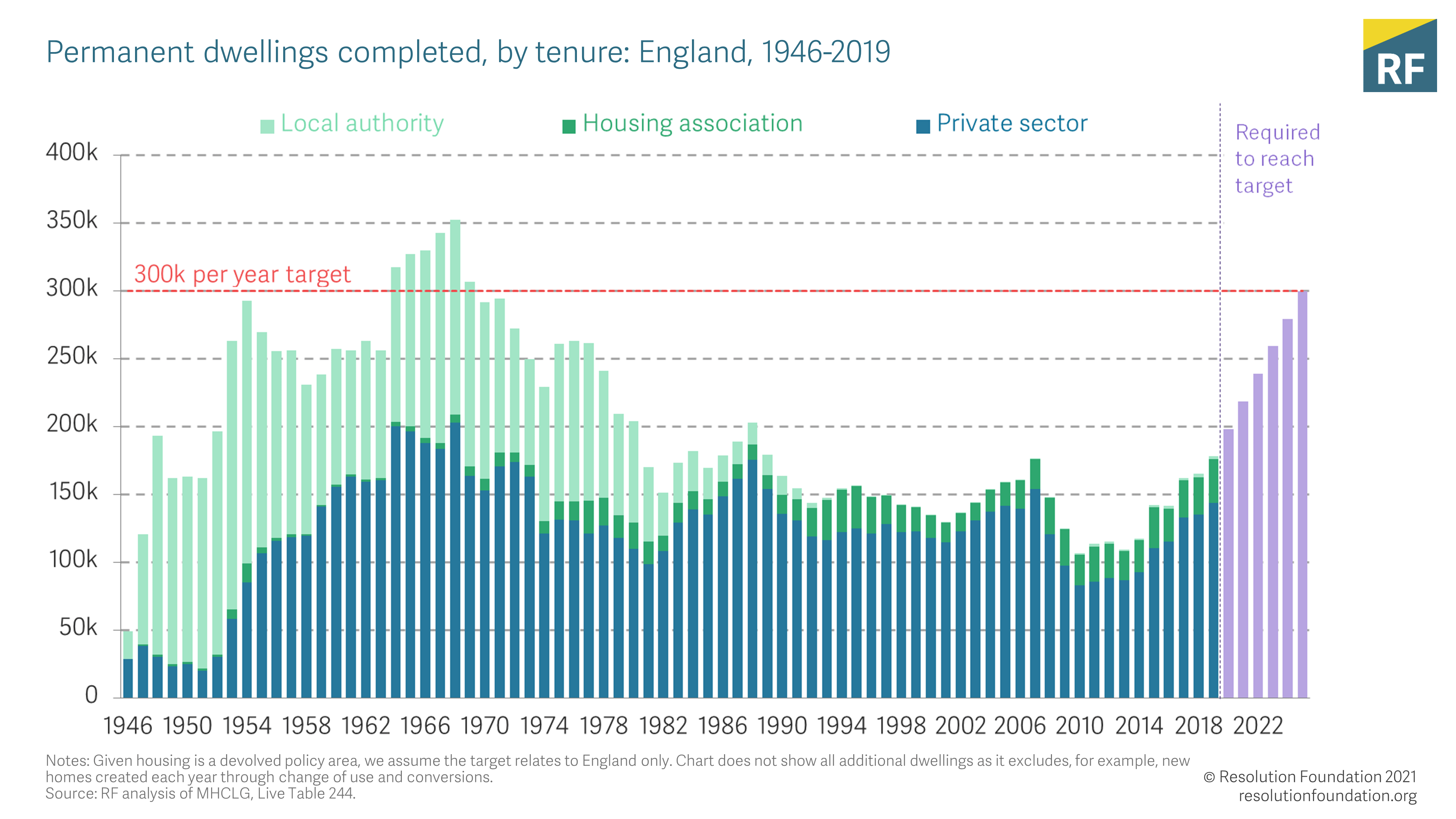 Figure 1 also makes clear how vulnerable (private) housing supply is to the economic cycle, frequently failing to return to its pre-crisis level before the next downturn hits. One common explanation for this is that building firms have tight margins and large sunk investments, and are therefore more prone to insolvency than many other types of companies during a crisis (this is particularly the case for small and medium sized enterprises, while larger firms face the challenge of a reliance on debt, and balance-sheet volatility). As a result, the industry can lose significant capacity in a recession: so when good times return, there are fewer players in the market, confidence remains supressed and a lag in output is observed.

To date, however, there are some signs to suggest the industry is holding up relatively well in the face of Covid-19, at least compared to the previous crisis (where the housing market was implicated in the downturn and not just an innocent bystander). In Figure 2, we plot monthly private housing output since the beginning of the pandemic, alongside the equivalent figures for the financial crisis (available only on a quarterly basis). This shows the very sharp effect Covid-19 has had on private house building: from March to April 2020, output fell to just 40 per cent of its previous level. Six months on, however, when it was far clearer to firms what a ‘Covid-secure’ workplace looked like, output had returned and indeed surpassed its previous peak. This stands in marked contrast to a decade ago when house building remained in the doldrums for months (and indeed years) afterwards.

Figure 2: Private housing output took a hard knock in 2020, but has bounced back quicker than in the financial crisis 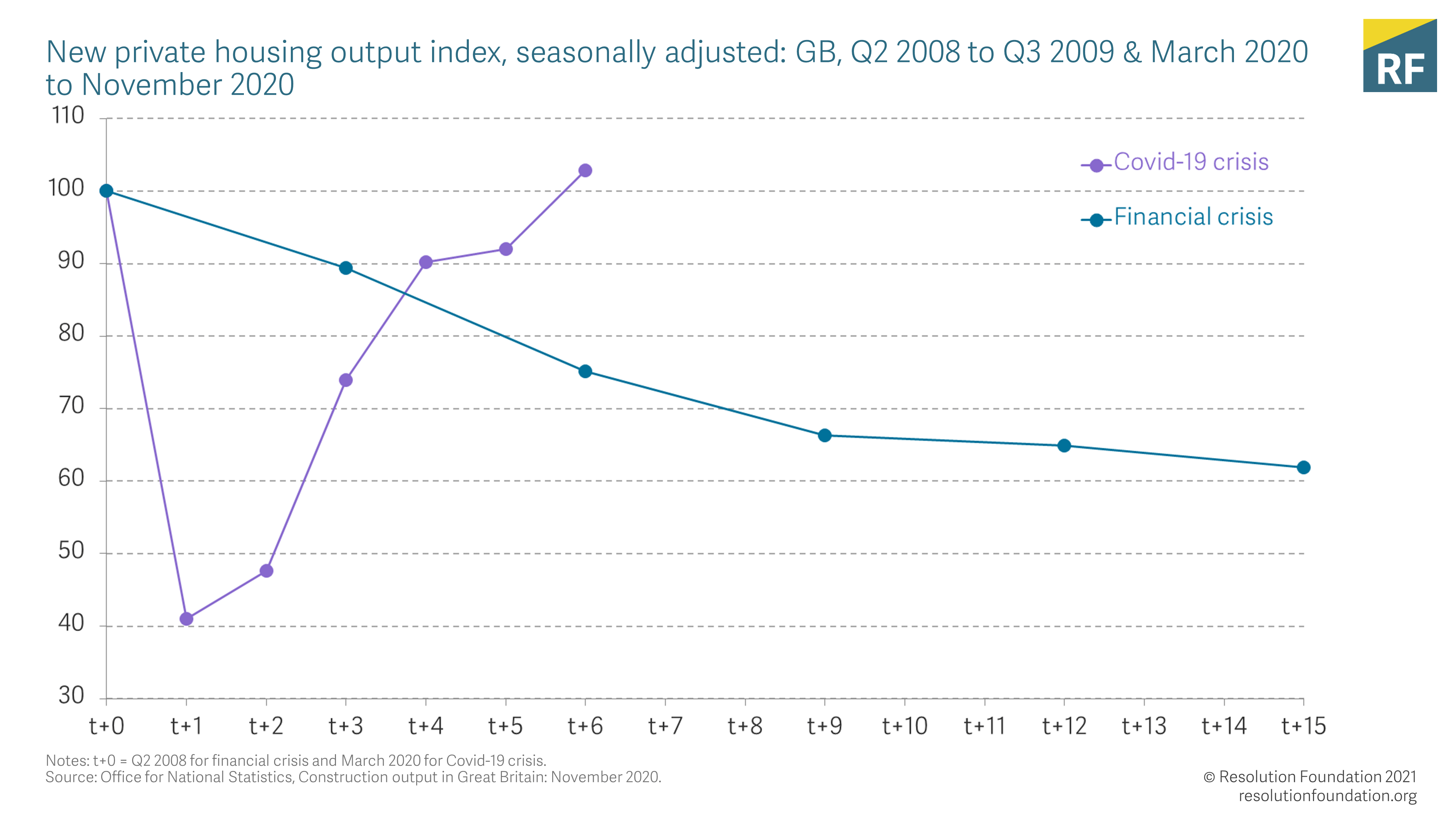 Even if capacity does not look set to be as significant a constraint on housing output as it has been in past downturns, there are still good reasons to think that house building will be supressed in the medium term. While builders are naturally keen to complete ongoing projects in order to recoup existing outlays, their appetite for new development is highly contingent on house price expectations (this is especially the case if they have bought land at a price which requires a high level of return). We explore this relationship in Figure 3, which shows trends in housing starts by private developers (solid lines) and changes in house prices relative to consumer prices (dotted lines) in the previous three recessions. As this makes clear, negative or weak house price growth goes hand-in-hand with low levels of output (although as the 2000s experience also shows, rampant house price growth is no guarantee of increased supply either).

So, what could the future bring? In the pandemic period to date, house prices have bucked the recessionary trend, stimulated by further falls in interest rates, the Stamp Duty holiday, significant support for households and firms’ incomes, the desire to access the more generous Help to Buy scheme ahead of its closure in March 2021 and the unleashing of demand pent-up over the first lockdown period. But as our previous Housing Outlook reported, there are good reasons to be bearish about future house prices in light of the Covid-19 hit to incomes – with some early signs that house price rises may be beginning to slow. Moreover, while the OBR forecasts a relatively short period of negative house price growth in its November Economic and Fiscal Outlook, the emergence of new variants, further restrictions placed on economic activity since, and questions about the size and shape of future housing demand all suggest significant uncertainty about the outlook.

Figure 3: Growth in housing supply is closely connected to trends in house prices 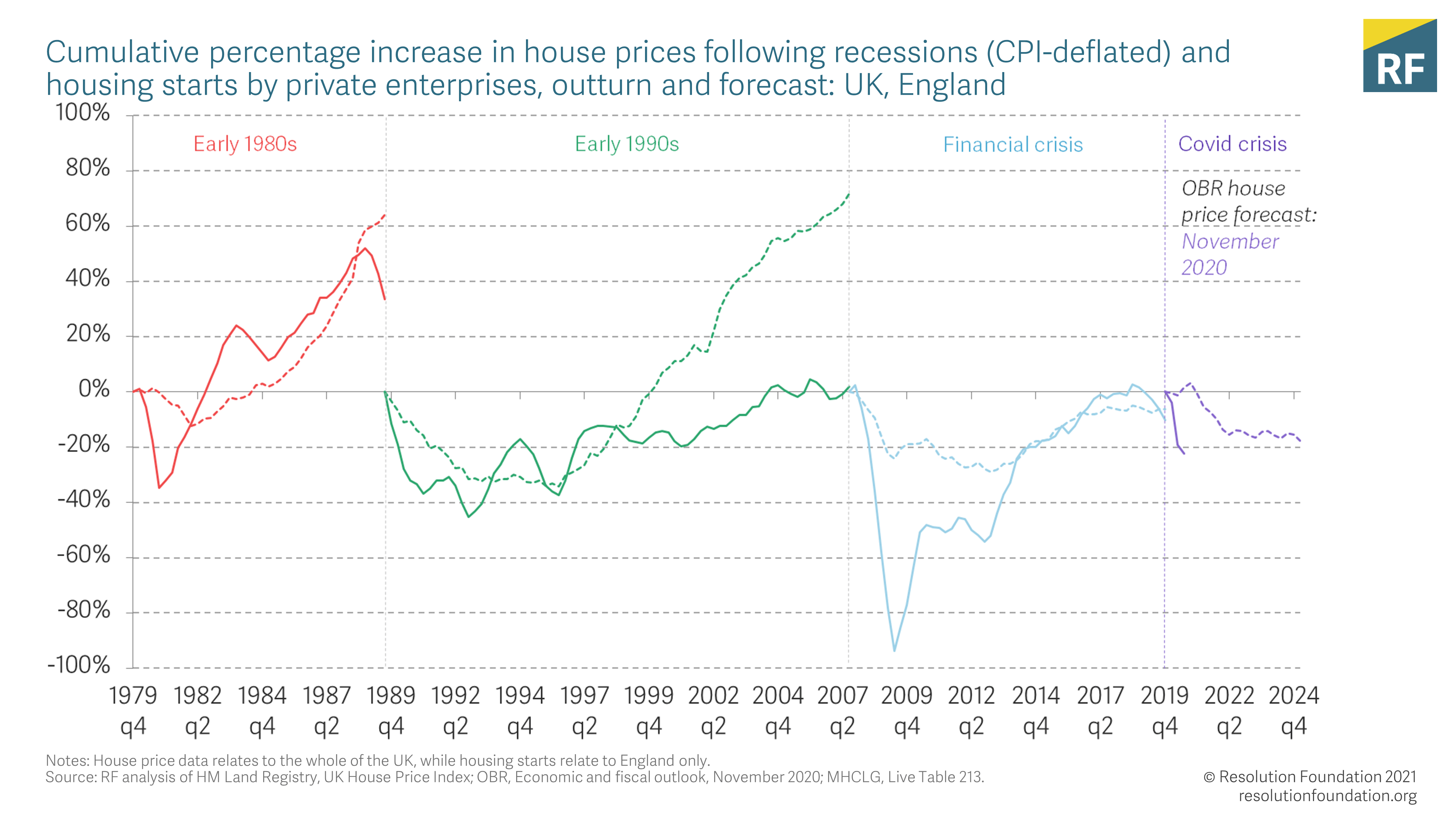 So the medium-term outlook for private housing supply looks weak, but is there scope for the social housing sector to step up output in its place? Housing associations and local authorities are far less exposed to the cycle than private developers, and grant finance enables them to keep building when times are tough. But there are two reasons why we should not expect social builders to dramatically increase their output in the coming months and years. First, while the Affordable Homes Programme 2021-2026 is funded to the tune of £11.5 billion, that remains less on an annual basis than the £8.4 billion finance made available to the social sector between 2008 and 2011 (the feedthrough of that programme to output can be observed in Figure 1). Second, social builders are actually far more exposed to the market today than they were in previous crises, and depend on cross-subsidy to drive forward their ambitious development plans.

Overall, housing supply is unlikely to fall as persistently as it did in the wake of the financial crisis, but it would be wrong to think that the Covid-19 hit to output will be short-lived. Uncertainty about when the world will return to ‘normal’, future unemployment levels and the trajectory for house prices will all inhibit new private building activity, while the social housing sector is unlikely to scale up in any significant way. Although new builds are not the only source of new housing stock (the Government’s continued liberalisation of Permitted Development Rights makes it easier to convert empty shops and offices into residential premises, for example), they are the primary way in which housing supply expands. All this means that Covid-19 has made the Government’s 300,000 new homes a year target look less like a stretch, and more like it is out of reach.