Welcome to Housing Outlook Q3 2021. In this spotlight we turn our attention once again to the uncanny performance of house prices over the past year. In particular, we focus on the effect of transaction tax holidays across the UK. Introduced to stimulate the housing market in July last year, the Scottish and Welsh transaction tax holidays have now ended (on 31 March and 30 June respectively), while the stamp duty holiday in England and Northern Ireland is currently being phased out (it is due to elapse on 30 September).

House prices have defied expectations over the last year, rising dramatically in the face of the Covid-19 economic crisis. While many commentators have blamed transaction tax holidays for this trend, analysis in this Housing Outlook suggests this is somewhat wide of the mark. Instead, there appear to have been stronger forces at play within the housing market over the past year such as enforced savings during lockdowns, changing housing preferences and super-low interest rates. We conclude that the transaction tax holidays have been problematic less because they were inflationary, and more because they have been wasteful (the Government has forgone an estimated £4.7 billion of tax revenues in England and Northern Ireland as a result).

Spotlight: The effect of transaction tax holidays on house prices

Over the past year, house prices have consistently bucked expectations (not least ours): data released this week shows the average value of a UK home increased by 13.2 per cent from June 2020 to June 2021.[i] To state the obvious, such price behaviour is highly unusual in a recessionary period: as the economy contracts, we would normally expect pressure on both incomes and consumer confidence to drive down house prices. So, what has been different this time around?

A number of distinctive features of this crisis spring to mind. First, the Covid-19 period has been marked by a dramatic increase in the aggregate saving rate as households’ ability to eat out, holiday abroad and the like have been severely constrained. Second, the pandemic appears to have affected housing preferences, with evidence of increased demand for larger homes and less populous areas. Third, mortgage rates have got cheaper and cheaper (at least for those with lower loan-to-value ratios). But fourth, many have pointed the finger at policy, suggesting that the transaction tax holidays introduced across all nations in summer 2020 have been inflating house prices.[ii]

It is reasonable to expect at least part of the savings from any transaction tax holiday to be capitalised into house prices (an HMRC evaluation of the stamp duty cut introduced for first-time buyers in wake of the financial crisis estimated that between 50 and 70 per cent of the value fed through into higher house prices, for example). But logically, if the cuts to transaction taxes have been the overwhelming driver of the house price trends observed over the past 12 months, we would expect to see higher growth in areas where the savings from the change in policy have been most significant as a share of the house price (although we recognise that the housing market works in chains so we would expect the effect to be somewhat dispersed). But as Figure 1 shows, that is not what we observe at all. Prices have grown by more in those local authority areas where the average buyer experienced negligible, if any, savings as a result of a transaction tax holiday, compared with areas where far higher savings were achieved (13 per cent in savings quintiles 1 and 2 compared to 7 percent in quintile 5).[iii]

Figure 1: House prices have risen faster in areas where the savings from transaction tax holidays have been negligible 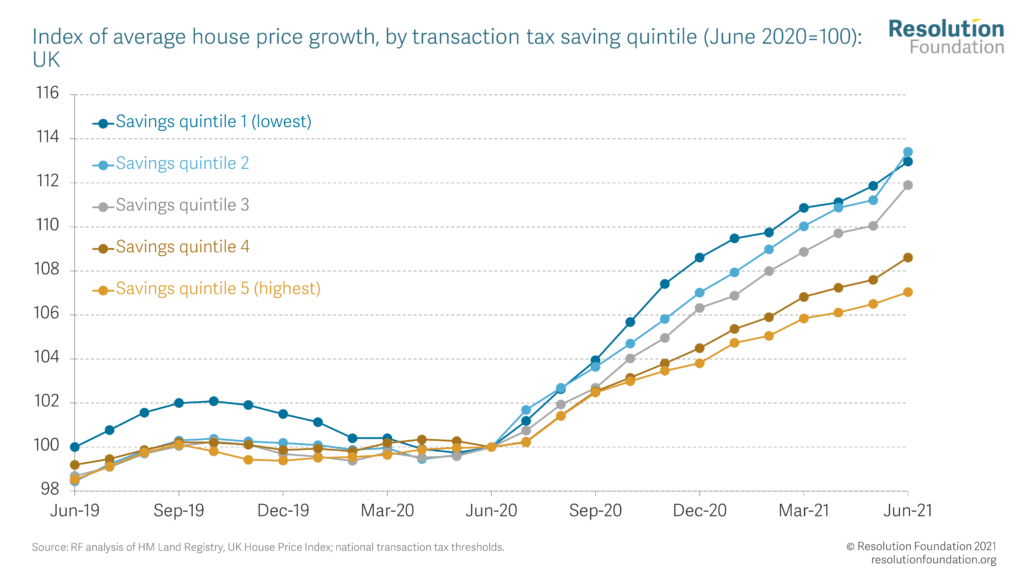 It is worth examining the price points in the market at which we would expect the inflationary pressure from a transaction tax holiday to be most acutely felt. In Figure 2, we plot the savings as a share of the house price at different price points for movers in England (the shape of the chart would be similar for Scotland and Wales, but we would see a different pattern for first-time buyers). As this shows, it is homes priced around the £500,000 mark where buyers benefit from the biggest savings relative to the price, and hence the sharpest stimulus should be found. However, when we look at the relative performance of more expensive sub-groups of the market, we find further signs to confirm that transaction tax holidays have not been the dominant force over the past year. Repeating the exercise we undertook in Figure 1 just for detached homes (which by their very nature are at the more expensive end of the market) our finding still holds – namely that house price growth of a higher-priced class has also been weaker in places where the pure economics suggests transaction tax savings should have had the strongest effect.

Figure 2: Those buying a home around the £500,000 mark have seen the biggest savings relative to the house price during the stamp duty holiday 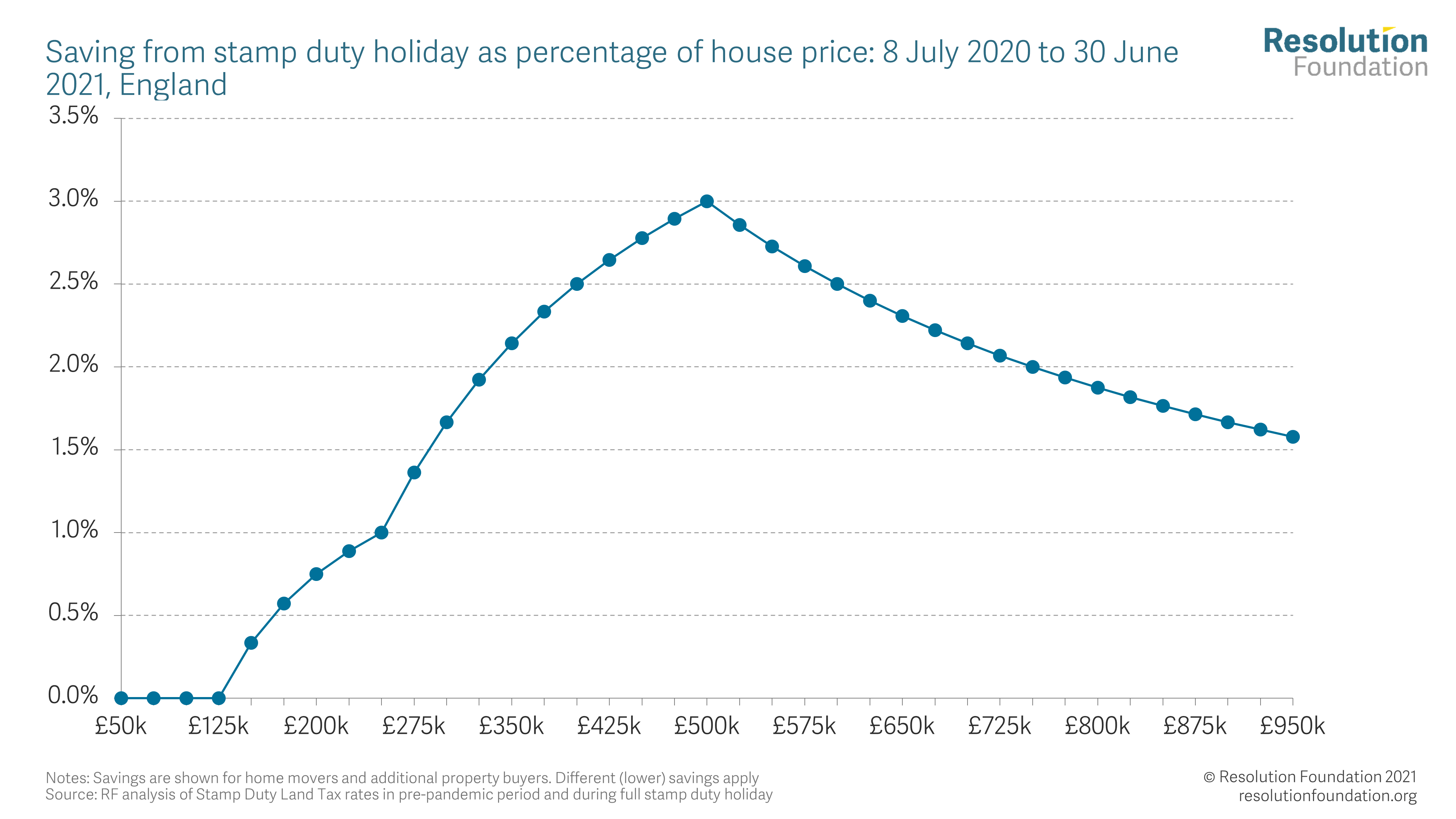 Of course, it is plausible that transaction tax holidays have stimulated prices across the board simply by bolstering confidence in the housing market over the past year. Figure 3 shows the devastating effect the pandemic had on activity in the earliest days – when viewings were effectively prohibited – and makes plain why policy makers decided to reduce transaction taxes in July 2020. But the chart also shows that the recovery in transactions has been broad-based: areas where the savings from the transaction tax holidays have been significant have generally been no more likely to see an increase in activity than those where the gains have been very small or non-existent. (There is, of course, a short-term difference in transaction rates between different savings quintiles in the run-up to March 2021, something we would expect given the holidays across all four nations were expected to – and in Scotland, actually did – end on 30 March).

Figure 3: Residential transactions fell sharply in the early days of the pandemic, but rapidly returned to normal levels 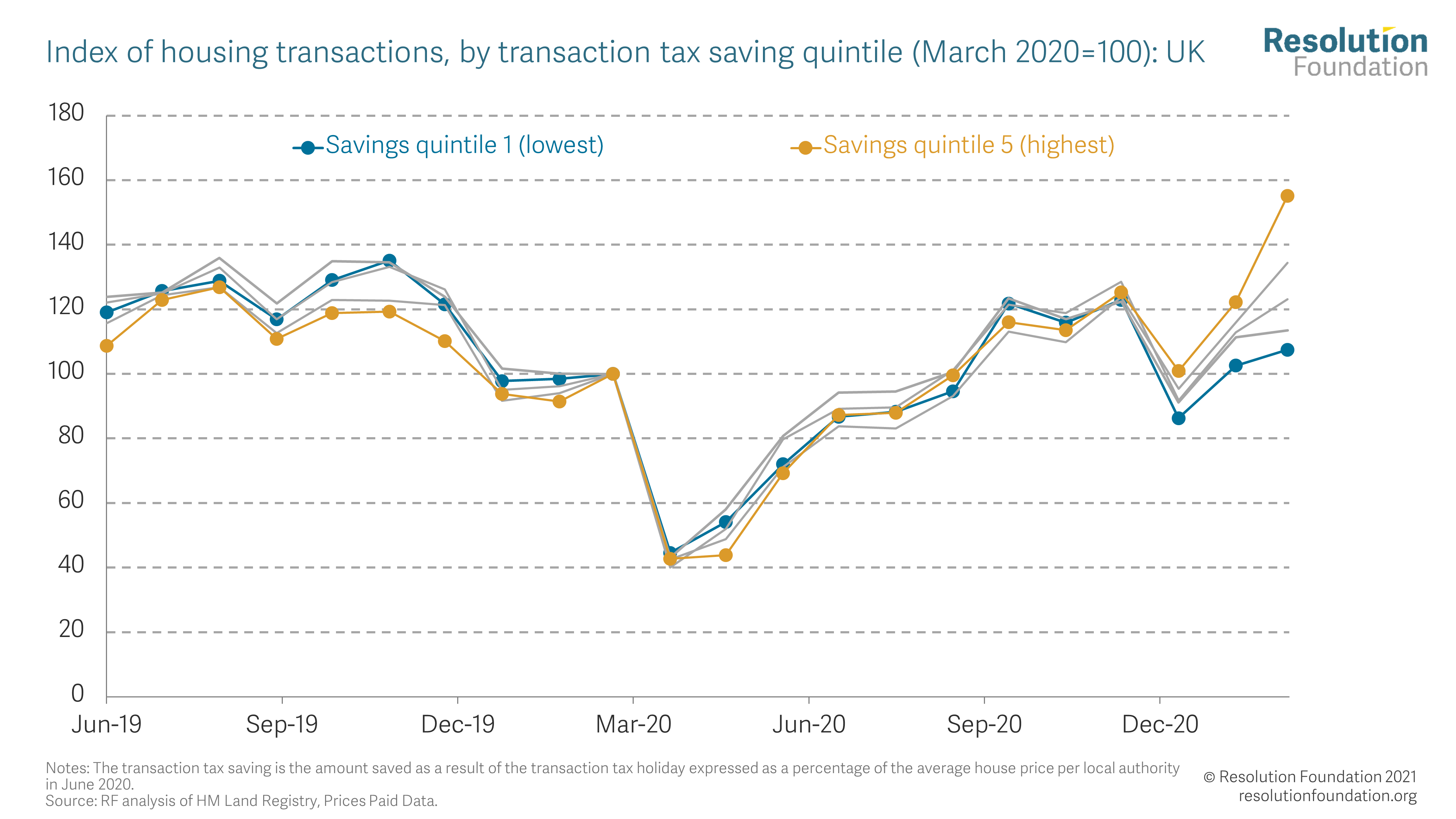 Finally, Figure 4 supports the view that there have been other equally, if not more powerful, forces at play in the UK housing market over the past year than the transaction tax holidays. Here we document house prices trajectories in five other developed economies over the pandemic period as well as the UK, and show clearly that we are no outlier when it comes to recent house price performance. Of course, there have been stimulus measures in each of these countries too, but the similar experience of comparable countries when it comes to house prices suggests we should look more to common factors such as historically low interest rates globally and changing housing preferences in the wake of the Covid-19 crisis for a large part of our explanation of recent trends.

Figure 4: House prices have risen significantly in other comparable countries over the past year 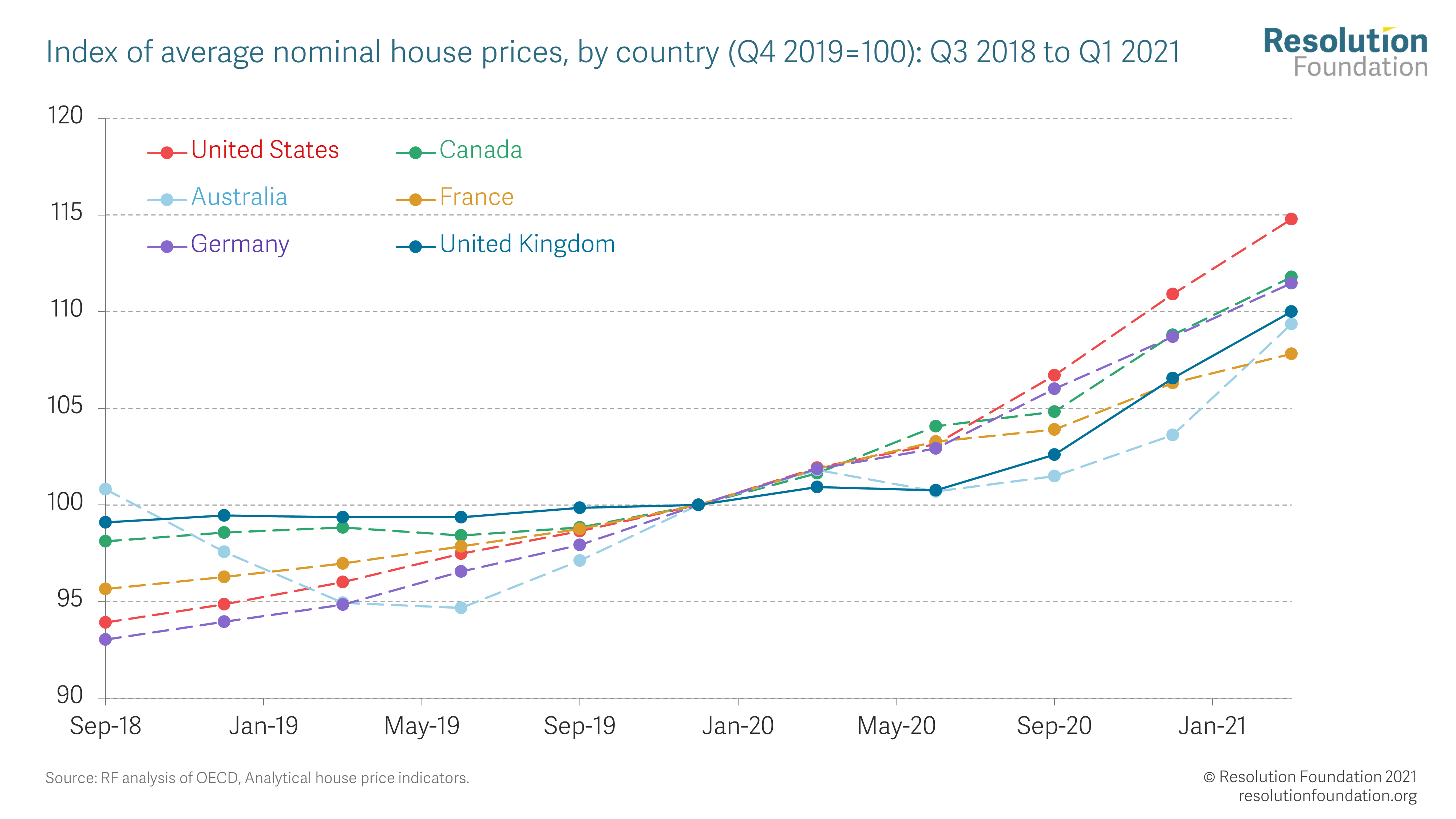 Overall, then, our critique of the transaction tax holidays nationwide (and certainly their extension in England, Northern Ireland and Wales in March 2021) is less that they have been the dominant force pushing up house prices over the past year, and more that they have not been required given other drivers of activity in the market. But there are some real costs attached to the decision. In particular, the Office for Budget Responsibility estimates that the stamp duty holiday in England and Northern Ireland alone will see the Government forego around £4.7 billion of tax revenues in 2020/21 and 2021/22 – much needed cash as we come out of the Covid-19 crisis. Finally, at a more human level, the house price surge of the past year has left many aspirant first-time buyers ever-further away from realising their home ownership ambitions, and contributed to widening absolute differences in wealth.

[i] The ONS does caution that there may be more revisions to the June house price figures than ‘normal’ given the very high level of transactions in that month and the challenge of processing the data at speed. See: ONS, UK house price index: June 2021, ONS, August 2021 for further details.