Faced with the highest inflation in at least three decades, the upcoming Spring Statement is bound to provide more support for households. But the precise set of choices – which could include support via Fuel Duty, benefits or National Insurance – will play an important role in determining the force of the cost of living blow facing low-to-middle income households this year.

High inflation will be the defining economic feature of 2022. Last Thursday the Bank of England told us that: “[i]nflation is expected to increase further in coming months, to around 8 per cent in 2022 Q2, and perhaps even higher later this year.” This will certainly be the highest inflation seen since the early 1990s, and could reach levels not seen since Margaret Thatcher’s first term in Downing Street.

Price rises on this scale, far outstripping wage growth, could see the typical household income fall by 4 per cent (£1,000) in real terms in the year ahead (2022-23). A decline on this size has only previously been seen during deep recessions; if realised, it would be the biggest drop since the mid-1970s.

Against this backdrop, the Chancellor will deliver his Spring Statement this coming Wednesday. Despite the downplaying of expectations, it is inevitable that further support for households will be announced, given the scale of income falls to come. But the form that support takes matters as much as its scale in determining whether it provides sufficient relief to those who will be hardest hit in the difficult months ahead. This note discusses the different options available to the Chancellor and their potential impacts.

Some measures directly targeting rising energy and fuel costs are now in train, or all but inevitable

The challenge posed by fast-rising energy bills and petrol prices has been evident since late last year. The Chancellor has already announced a package to deal with next month’s rise in the energy price cap, with about four-in-five households set to receive £150 via the Council Tax system in April, and all billpayers due to get a £200 ‘Energy Bills Rebate’ due this Autumn (but repaid in the years to come). This approach has spread support widely across groups rather than targeting those on lower incomes who will be squeezed hardest by rising energy bills.

With petrol and diesel forecourt prices already up by over 40p and 50p a litre respectively over 2021 levels, it is very likely that a cut to Fuel Duty – going beyond the already-announced freeze in April – will be announced this week. We have seen such moves across advanced economies, with a direct rebate of vehicle fuel costs happening in France, and fuel tax cuts announced in Sweden, Ireland, and the Netherlands in the last few weeks. As with the existing energy package, a Fuel Duty cut would provide fairly broad-based support across the income distribution, with the highest-income households gaining most in cash terms (because they are more likely to own cars and to drive a high mileage) but those on lower incomes doing better as a share of their existing incomes. The costs would be substantial, with a 10p cut (on the current 57.95p per litre rate) costing around £5 billion in 2022-23, and that would reverse only around a quarter of the past year’s rise in petrol and diesel prices (experience suggests that it would also lead to a permanent reduction to Fuel Duty revenues, as Chancellors have found it hard to even raise Fuel Duty in line with inflation for many years now).

A Fuel Duty cut is all but inevitable this week, but the Chancellor is likely to go further and provide more support through the rest of the tax and benefits systems. Conservative backbenchers and the Labour Party have focused on calling for the imminent National Insurance (NI) rate rise to be scrapped or postponed. Certainly, the timing of the tax hike is not ideal given the pressures facing all households. But it is unlikely the Chancellor will take this course, given that delaying the increase until nearer an election is unappealing, and scrapping it would be very expensive (costing £9 billion a year). A delay or cancellation of the NI rate rise would focus help on higher-income households – over half of the gains would go to the richest fifth of households – so, if he wanted to provide more support to households, he would be right to look elsewhere.

Another set of options relate to the uprating of parts of the benefit and tax systems, which conventionally take place in April based on inflation measures from the previous Autumn.

Most benefits (including the State Pension) are set to rise by 3.1 per cent next month, based on the rate of inflation last September. But that was before even the relatively small October 2021 energy price cap increase, never mind the much larger rise coming this April. Both of those rises will, however, be reflected in the rate of inflation in September 2022, meaning that benefits could well rise by 7 per cent or more in April 2023. This would leave the real value of social security falling significantly in the months ahead, before making up the lost ground next April.

This harmful real income rollercoaster for poorer households and pensioners could be addressed without lasting fiscal impacts by increasing benefits by more this year, and less next year. Increasing all benefits by an extra 5 per cent this April would cost a one-off £9 billion in 2022-23, or £3 billion if only Universal Credit and Tax Credits were included. As Figure 1 shows, this does not provide a rise in real-terms: it merely ensures that the value of benefits keep pace with price rises between April 2021 and April 2022 (and this does not try to account for the fact that poorer households are facing inflation that is even higher than the official CPI measure, which is effectively an average across all households’ spending).

Figure 1: The real value of benefits will decline markedly over the next year unless there is an additional increase 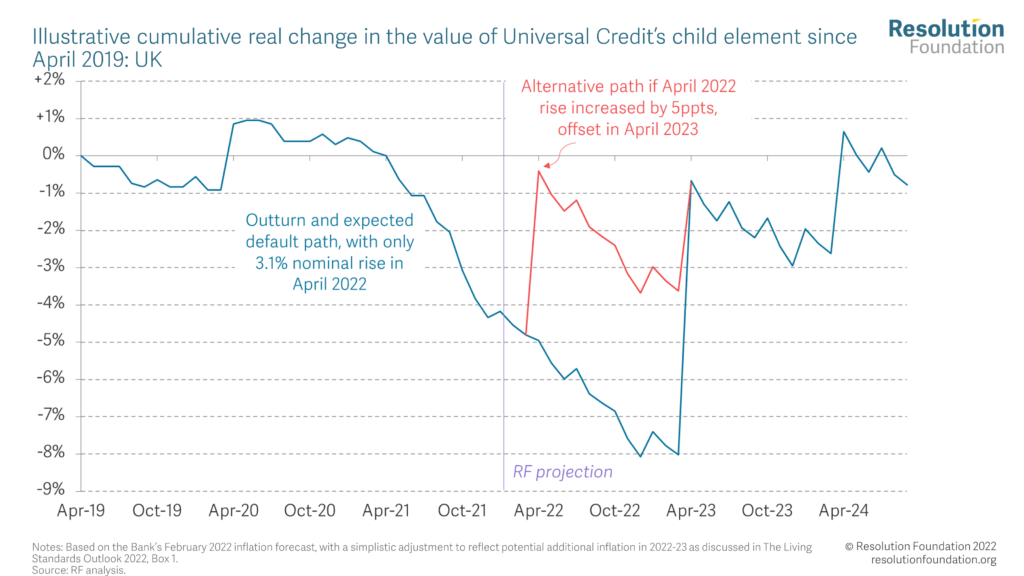 A similar pattern will apply to the uprating of the point at which workers start to pay National Insurance (NI). This is currently around £9,600, and is due to rise to around £9,900 in April 2022. Based on current expectations of inflation in September being in the region of 7.6 per cent, this would then rise again by £750 in April 2023 – to £10,700. That would be a significant rise (corresponding to a cut in the amount of NI paid by employees) but would come too late to provide relief to those seeing their incomes squeezed by inflation now.

So, another option to ameliorate the living standards hit in 2022-23 would be to bring forward some or all of the planned April 2023 NI threshold increase. An increase to £10,700 now, rather than £9,900, would provide a tax cut of around £100 to people in work, with no permanent loss to the Treasury if the threshold reverts to its previous path in future years. But there have also been calls for a permanent change. Raising the threshold all the way to £11,300 has been suggested as a way to (at least) offset the NI rate rise for all workers below the median, and would have a cost of around £5 billion a year. Going further and achieving the Conservative Party’s manifesto “ambition” of a £12,500 threshold would cost around £9 billion in 2022-23. These options are shown in Figure 2.

Figure 2: The National Insurance threshold is set to rise significantly in April 2023, and one policy option would be to bring forward that increase 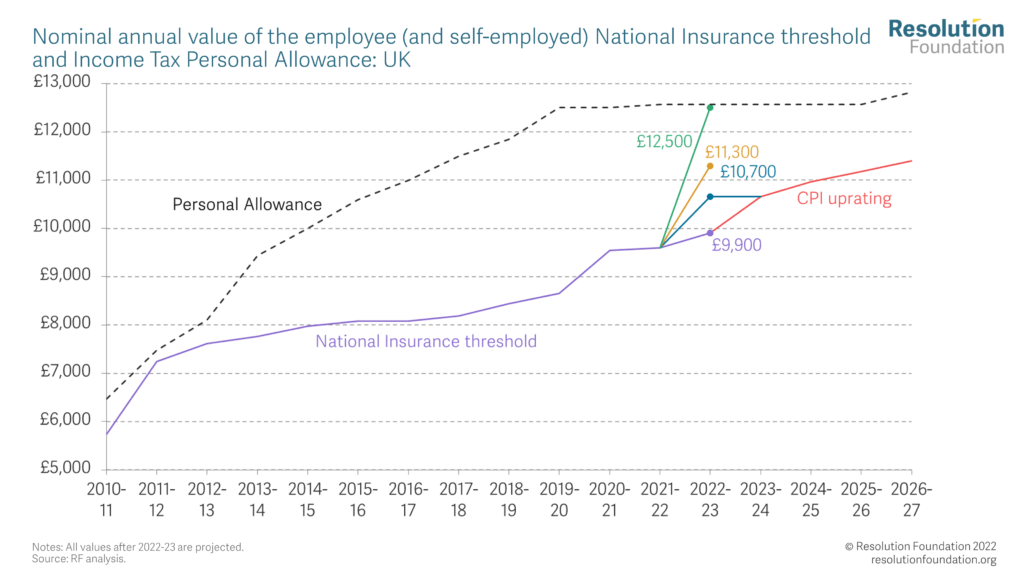 The Chancellor has already announced that income Tax thresholds will be frozen until April 2026, so any increase in them will have permanent fiscal costs. High inflation will, however, mean that the policy of freezing them will represent a much bigger tax rise than it did when announced. A frozen Personal Allowance of £12,570 until 2025-26 compares to the expectation that the it would have otherwise reached £13,500 in 2025-26 under the inflation forecast at the time of the freeze’s announcement, and over £14,000 given more recent inflation forecasts.

These are the three big policy options that the Chancellor will have considered as mechanisms for providing living standards relief to households ahead of his Spring Statement: cancelling the (worker) NI rate rise; raising the NI threshold; and bringing forward benefit uprating. All three could be done either temporarily or permanently, and could potentially be of a broadly similar scale – costing around £9 billion in 2022-23 if implemented in April (a big if, as discussed below).  (The Chancellor may also have considered a further cut to the Universal Credit taper, building on the large reduction he announced in the Autumn. This would provide welcome support for working households on Universal Credit. But, coming after the removal of the £1,000 uplift to UC, it would further widen the chasm in the recent treatment of out of work households on benefits compared to those in work in a way that would be impossible to justify at a time when costs are rising for both groups.)

Although all have similar costs – and therefore a similar worth a similar amount to households on average – their distributional impacts are very different: 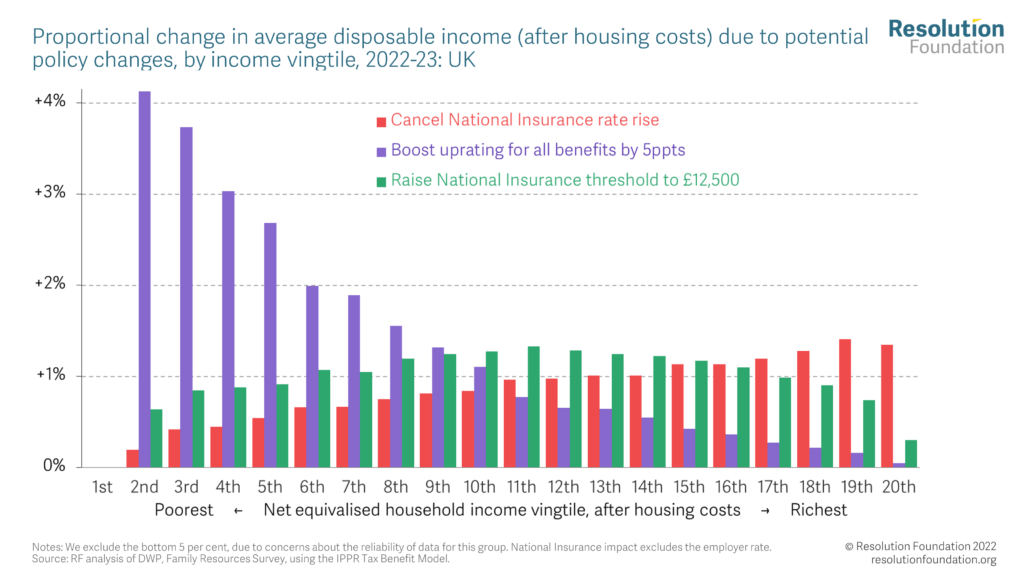 Around seven-tenths of the population would benefit in each case (18 million households when increasing all benefits and 17 million when cutting NI). But there would be big differences along dimensions other than income: pensioners or those not working, for example, would receive little or no benefit from NI changes. In contrast to both forms of NI cut, raising benefits would reduce poverty: keeping benefits at their same real value would take half a million people out of (relative) poverty in 2022-23, compared to current plans.

It should be noted that there are administrative challenges with all of these policy options. As we are only weeks away from the start of the new financial year, adjusting benefit levels or NI thresholds/rates will be difficult. Rapid changes are likely to be achievable in some cases, such as to Universal Credit levels, but others could take around three months to implement: but that is not a reason for them not to happen.

To aim support at low- and middle-income households, the Chancellor should revisit the uprating of benefit levels and NI thresholds

If your objective is to support those who will be hardest hit by this year’s living standards disaster, then the top policy priority should be an increase in the level of benefit payments. That would prioritise support for the group that is least likely to be able to draw down on saving built up during the pandemic, has least scope to reduce non-essential spending in the face of rising energy costs, and faces the greatest risk of destitution.

When it comes to tax policy, an increase in the NI threshold wins overwhelmingly compared to scrapping a rise in NI rates that would only really make a difference to higher-income households.  Neither, of course, would do anything for those above the state pension age (who don’t pay employee NI) and those not in work.

Bringing forward some benefit and NI threshold upratings looks much more likely to be adopted by a Chancellor with an eye on how to provide much-needed help this year without permanent fiscal costs, while also allowing him to say that lower earners have been protected from the impact of his own NI rate rise. We would expect one or both of those measures to be combined with a Fuel Duty cut. Whether that is what Rishi Sunak chooses to do remains to be seen, but we do not have long to wait.