While big rows over Brexit and the size of state we want have tended to dominate the news cycle over recent weeks, the 2019 general election campaign hasn’t been entirely devoid of skills policy. In fact, the Liberal Democrat, Labour and Conservative Party manifestos all include bold – albeit thinly detailed – proposals on apprenticeships and adult education. We can get a good sense of the problems that these plans do – and don’t – address by reviewing the raft of apprenticeships and adult education data published by the Department for Education (DfE) on Thursday.

The DfE publication included final figures on the number and type of apprenticeships that were started over the 2018/19 academic year. It confirmed one trend that we have continuously identified: the fall in apprenticeship starts at Level 2, and the steady rise in the number of starts at higher-education (Level 4+) levels, as the chart below shows. 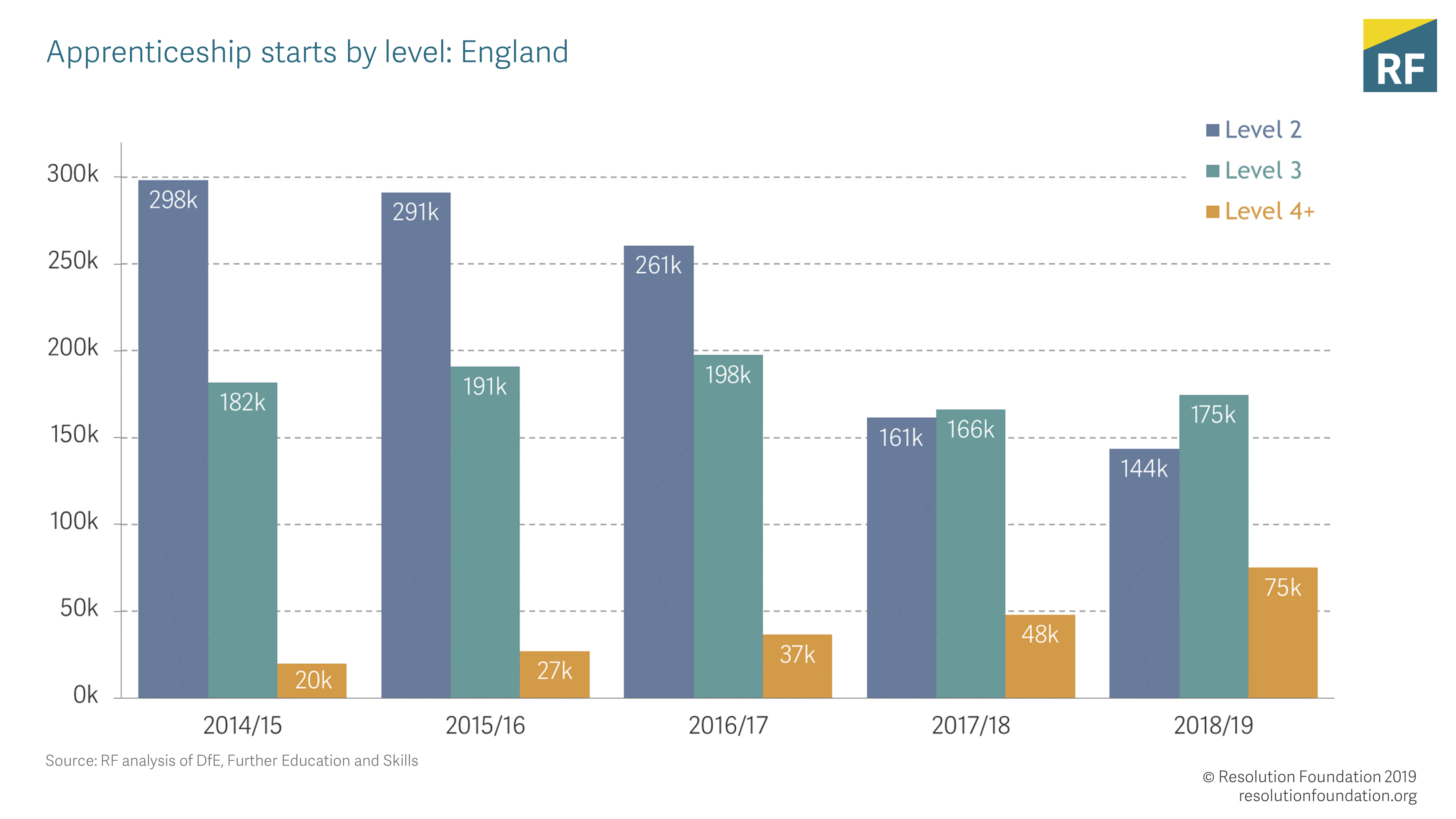 While the overall fall in starts (from 509k in 2015/16 to 393k in 2018/19) has generated headlines, previous Resolution Foundation research put it into context. We noted, for instance, that the types of apprenticeship programmes that have experienced the largest falls in starts (such as Level 2 apprenticeships in business, retail, and health and care) are the same programmes that in the past had both the lowest levels of formal training and the highest shares of apprentices unaware that they were, in fact, an apprentice. We found that this change in numbers was primarily driven by the introduction of apprenticeship standards – which require more training hours and longer programme durations than in the past – rather than by the apprenticeship levy.

To that end, Thursday’s publication offers a bright spot: the average hours that an apprentice is expected to spend doing off-the-job training has risen across the board, and specifically for those starting programmes at lower (Level 2) and middle (Level 3) levels. The chart below shows that Level 2 apprentices were, on average, expected to spend 90 more hours on off-the-job training during 2018/19 than they were during 2014/15. At Level 3 the increase was 120 hours. 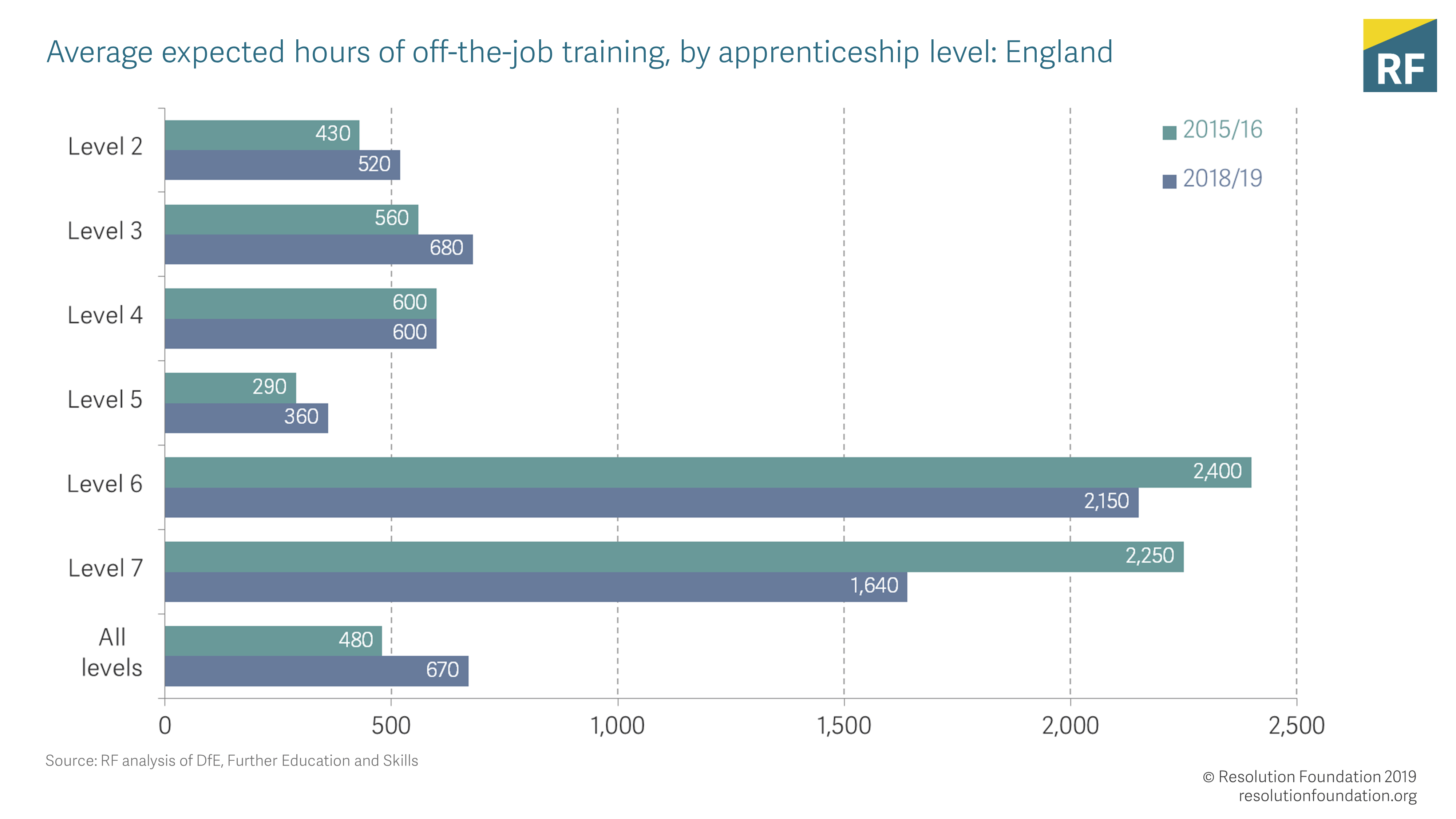 Of course, the key word here is ‘expected’: these figures are based on the number of weekly training hours that surveyed apprentices in similar programmes reported having received in the past, not the actual number of hours apprentices spent on off-the-job training over the previous academic year. And here’s the blind spot: since 2017, apprentices are required to spend a minimum of 20 per cent of their time doing off-the-job training, but the National Audit Office (NAO) has warned that there’s no effective mechanism for monitoring whether that’s being done. Just last month, a survey of apprentices found that nearly half are not confident that they’re receiving their full amount. There’s little point putting bold policy into place while ignoring the beneath-the-surface mechanisms that ensure its efficacy.

This morning’s publication offered confirmation of another trend: the fact that since 2015/16, the share of starts taken up by 16-18 and 19-24 year olds has fallen (by 0.9 and 0.7 percentage points, respectively), while the share taken up by over-25s has grown (by 1.7 points). During 2018/19, apprentices aged 25 and older formed 46 per cent of all starts. And yet, once we consider both age and level together, as we do in the chart below, the picture for older apprentices is slightly altered. While there’s been substantial growth in the number of apprentices aged 25+ at higher levels of study (+31k), there’s also been a large drop in the number of older apprentices at lower levels (-70k). 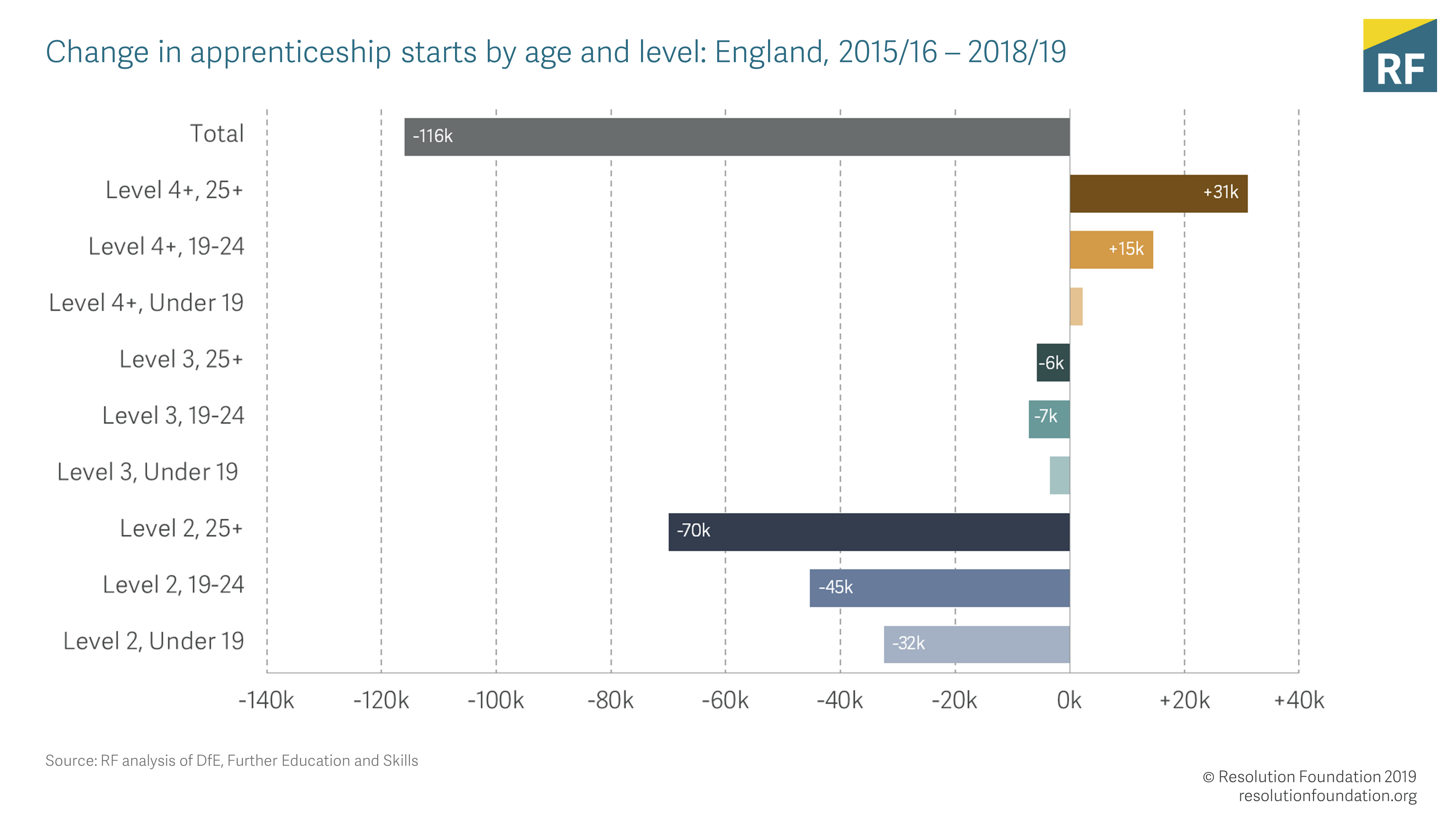 The DfE publication also supports our suspicion that a large proportion of apprentices are prior employees, rather than new recruits. In 2018/19, roughly half of apprentices had worked for their employer for a minimum of seven months before embarking on their apprenticeship, including 41 per cent who had worked for the same employer for 12 months or more. This appears to be particularly acute at higher apprenticeship levels: the DfE’s 2017 survey found that 60 per cent of apprentices at Level 4+ were prior employees.  As a result, it looks like when it comes to higher-level training, today’s apprenticeship system increasingly benefits pre-existing employees. This detracts from the primary objective of offering young people and new starters a clear route to a skilled career.

And that’s where the manifestos come in. The Conservative Party proposals on apprenticeships promised to “look at how we can improve the working of the Apprenticeship Levy,” arguing that “significant numbers” of new apprentices would be required for big infrastructure projects. Both Labour and the Liberal Democrats suggested widening the types of training that the levy can be spent on, while ring-fencing a portion of the apprenticeships budget for specific types of programmes. For Labour, this entails a “Climate Apprenticeship” programme focused on the skills needed for clean technology. For the Liberal Democrats, it’s a “‘Social Mobility Fund’ targeted at areas with the greatest skill needs.”

What’s left unsaid is who and what each of the main parties thinks apprenticeships are for. Should they be designed to provide young people and new starters with a route to good career, or should they be ‘catch-all’ programmes that deliver pre-existing employees occasional bouts of work-related training?  By widening the scope of programmes that the levy can be spent on, it looks like both Labour and the Liberal Democrat proposals could lead to the latter. And while commitments to dip into apprenticeship funding for programmes on social mobility and clean technology are on the surface very welcome, they come at a time when many fear the apprenticeships budget could soon be overspent.

Each of the parties offers a bit more food for thought on adult education. The Liberal Democrats float a new take on an individual learner account with the ‘Skills Wallet’, which would provide individuals with funds for education and training at different points over their life course. The Labour Party promises a free lifelong entitlement for training up to Level 3, and six years of training at Levels 4-6. And the Conservatives propose a National Skills Fund to “provide matching funding for individuals and SMEs for high-quality education and training.” Given sharp falls in the number of adults who have participated in lower and mid-level education over recent years (as the chart below shows) these proposals are very welcome. 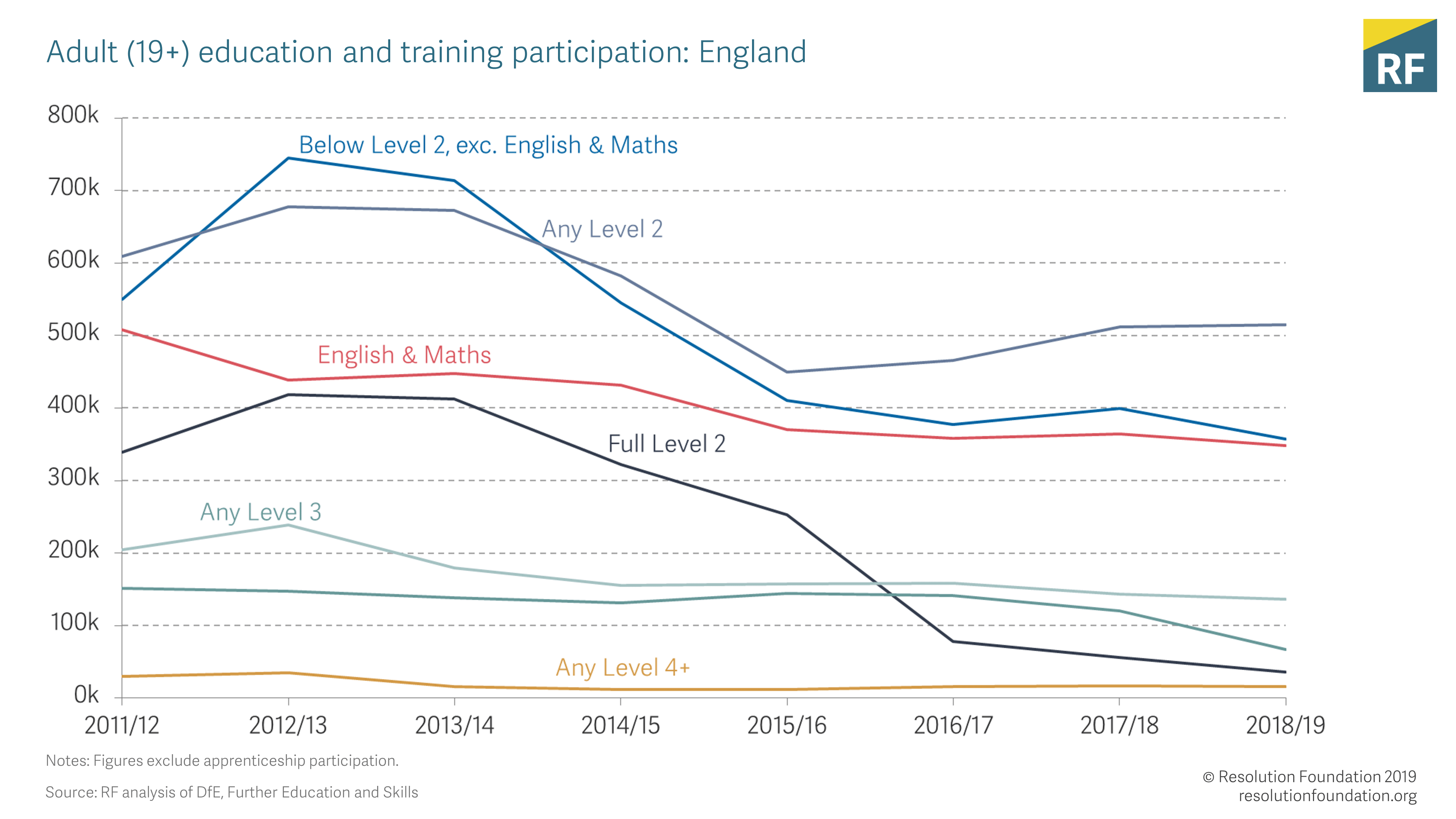 Of course, these proposals also bring with them a host of questions: how to ensure quality and how to prevent fraud (see the training hours example above); how best to provide advice and guidance; and how to ensure entitlements are taken up by those who need them most.

All in all, it’s welcome to see the parties focus on education, and in particular on education for adults with lower-level qualifications. But whoever gets the keys to Number 10 shouldn’t forget young people, and the routes available to them. While the higher-education route is well-established, the options for the 50 per cent of young people who don’t go to university are complex and of variable quality. Apprenticeships, when properly monitored and regulated, could offer some of these young people a route to a good career, rather than offer a one-off training course for the already-employed. It’d be great to see some proposals that more firmly address that.

Leaving lockdown
Young people’s employment in 2021: improvements and challenges in the second year of the Covid-19 pandemic
31 January 2022
·
Louise Murphy
Uneven steps
Changes in youth unemployment and study since the onset of Covid-19
14 April 2021
·
Kathleen Henehan
Can training help workers change their stripes?
Retraining and career change in the UK
18 August 2020
·
Kathleen Henehan
Back to top