I’m packing my bucket and spade for some seaside fun at Labour Party conference this weekend in Brighton. Obviously, the conference will be overshadowed by a massive row about Brexit (again). But we like to do things differently at RF so we’ll be hosting a massive row civilised discussion about its economic policy instead.

To kick this off, Top of the Charts this week explores whether Labour’s economic policy is too radical – or not radical enough. We’ll pose this same question to John McDonnell, Ed Miliband, Frances O’ Grady and others at an event on Tuesday evening. Come along.

And if Tory Brexit rows are more your bag then fear not – I’ll be swapping my swimming trunks for a parka jacket as I head up to the Conservative Party conference in Manchester next weekend.

The Labour Party says it wants to see radical change. But how radical is its radicalism? And is it the right radicalism to answer the questions that 21st Century Britain is asking?

These are big questions, and they need answering. After all, a general election is coming and history/the betting markets suggest that there is a non-negligible chance of a Labour government.

The case for radicalism is easily made. Britain is too unequal, and we’ve been living this unequal reality for 30 years. Too often debates get bogged down in whether inequality has recently risen or fallen on one measure or another. This risks masking what really matters – the level of inequality has just been too high for too long. And we’re not just too unequal, we’re too unproductive. The connected stagnation of productivity and living standards over the past decade means that almost everyone has found things more difficult than they expected. Even those prepared to accept an unequal society when all boats are rising, struggle to do so against that backdrop. 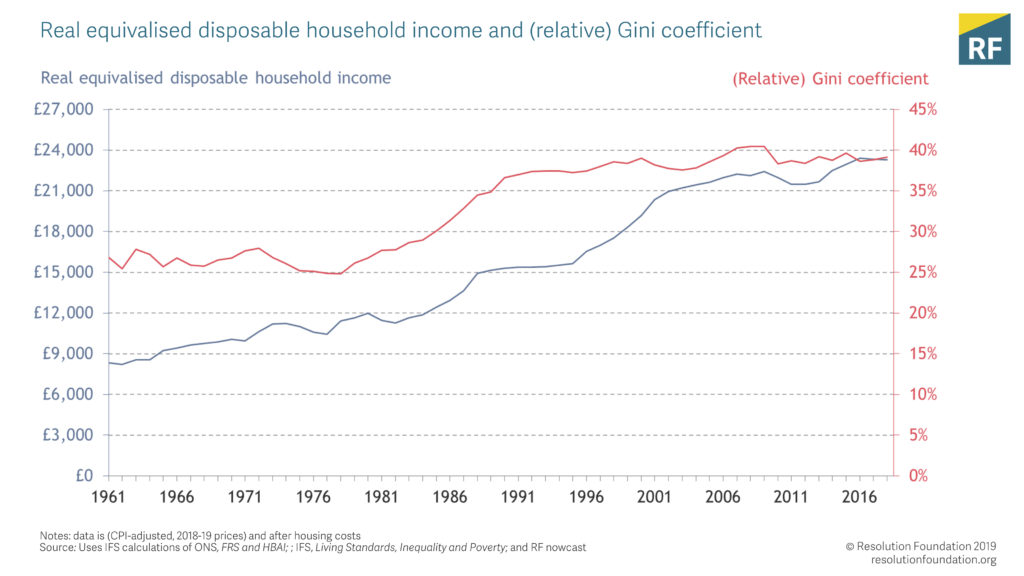 So how radical is Labour’s response? Let’s start with plans for a bigger state. The 2017 manifesto is in this respect social democracy on steroids, proposing £50bn of tax rises and £70bn more spending – taking receipts as a share of GDP over 40%. 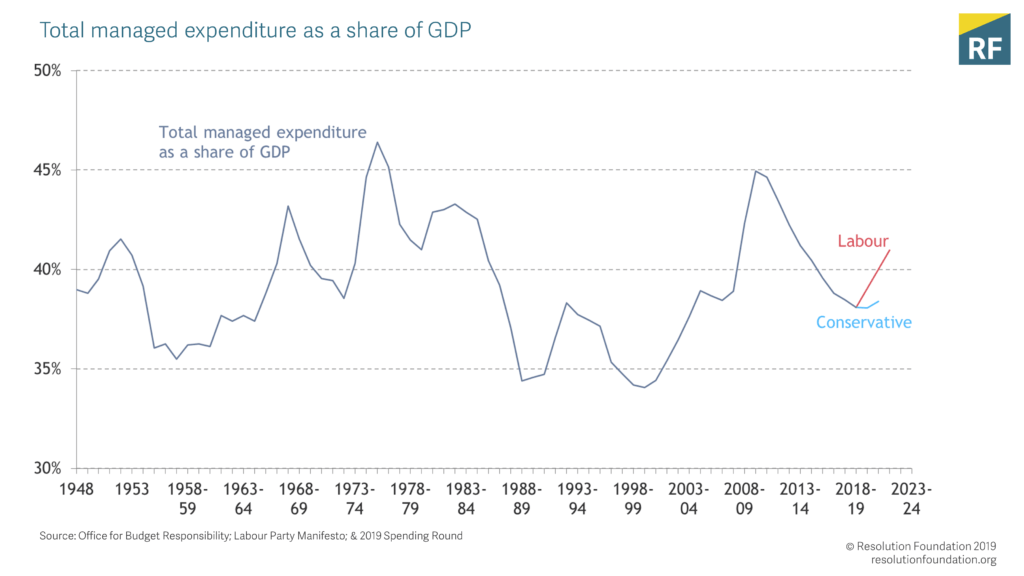 Now in some ways, this isn’t that radical. All main parties now favour a bigger state – indeed the Conservatives announced plans for one just two weeks ago. Even after such an increase our state would still be smaller than that of many northern European countries, such as Norway (49% of GDP) or Sweden (50% of GDP). But while the level proposed is nothing outlandish, it is a radical increase for Britain to a level (approaching 40 per cent of GDP) only sustained during the 1970s and early 1980s – back when the state turned out cars, coal and concords.

The proposed increases are even more radical when set against Britain’s past and future. A bigger state is where we’re heading under any government: we’re all social democrats now. But this is for reasons quite different to Labour’s pledges to deliver new things like free tuition fees, hospital parking and school meals. First, our past means spending will rise, with a near decade of austerity having run its course. Labour’s 2017 manifesto included no additional funding for two of the areas of most acute need – prisons and local government – but in practice a Labour government will need to increase spending on both. And turning to the future, our state will have to grow simply to maintain what we’ve already got. An ageing population and healthcare cost pressures mean we need to find an additional £36bn by 2030 just to stand still. 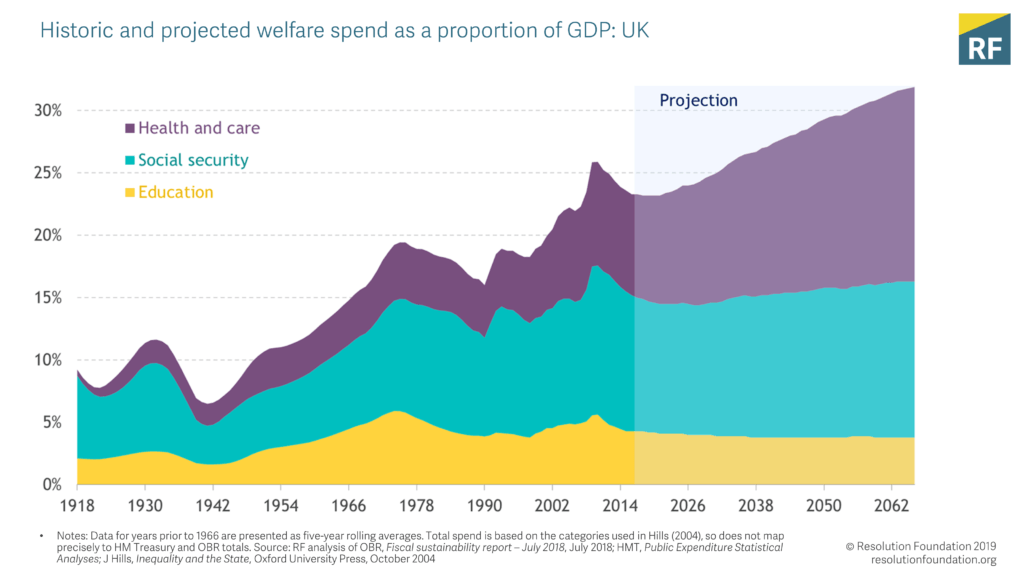 Navigating the understandable wish to promise the new alongside protecting the already existing may in practice end up being the central task of a Labour government – requiring more and different radicalism than currently understood.

It follows that tax rises are coming. Labour’s radicalism is that they have said so very clearly – particularly given they now face a Conservative Party promising to end austerity and cut taxes. Higher corporation tax (CT) and income taxes (IT) for higher earners are the central planks of these tax rises. Both are understandable. Ludicrously large cuts to CT mean we have been causing, not just participating in, an international race to the bottom recently. But the context should at least cause pause for thought on the size of the immediate increase. Brexit Britain is not the optimal place for a 9 percentage point rise in CT, as dire business investment figures recently demonstrate. 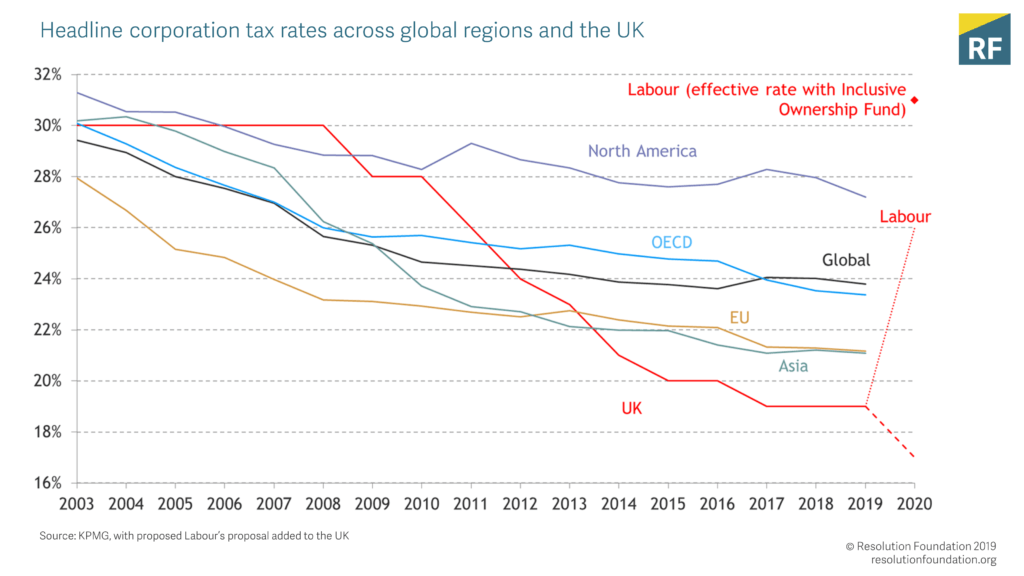 If you want to see lower inequality then higher taxes on high earners are an important part of achieving that. Labour’s plans now go significantly further than reinstating the 50p tax band, with increases for everyone earning over £80,000. Now, it’s certainly possible to ask the better off to pay more – including via income tax. However, narrowly focusing on this (already top heavy) tax misses something crucial: wealth, which has surged in importance since the 1980s relative to income. Being radical on tax in 2019 means talking about wealth taxes. 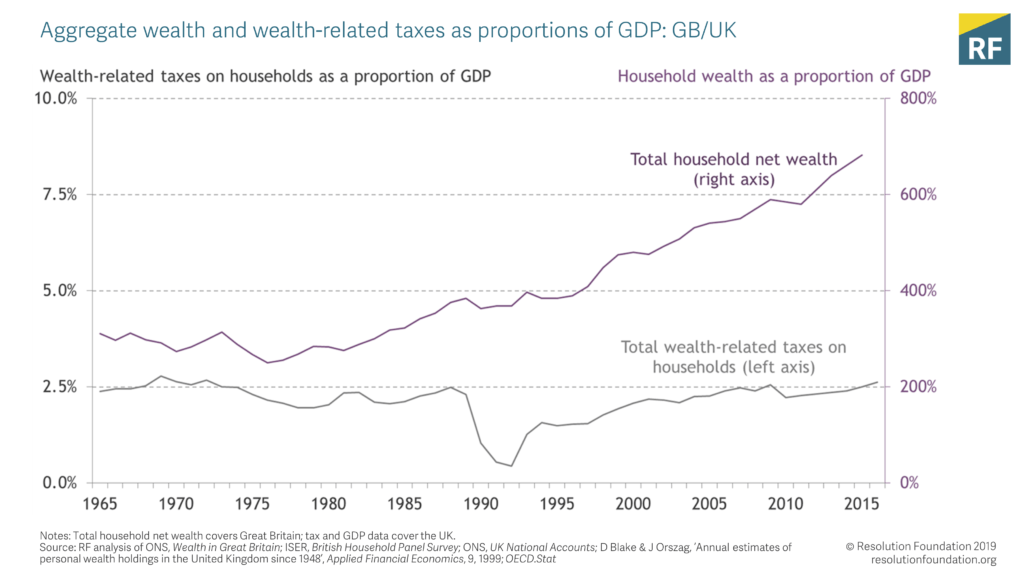 Water, energy and rail nationalisations are often seen as the most radical parts of Labour’s programme. This is slightly overdone for three reasons. First, there are lots of international examples of utilities being state owned.  Second, it can be fairly straightforward to do – rail operating companies contracts taken in house as they expire and others can be bought so long as you pay a fair price (we got some practice in the financial crisis). It would be even easier if we had a fiscal framework that accounted for the asset, as well as the higher debt. Third, the list of things being nationalised isn’t as long as is sometimes implied – energy nationalisation in practice just means the distribution grids, not the much more tricky generation or retail parts of the industry.

So, radical but quite as radical as both proponents and opponents like to say. What matters isn’t if nationalisation is possible, but whether it’s done well or badly – for instance do we avoid politicians directly trading off workers pay, consumers bills and investment. And it’s hard to see these nationalisation as transformational  because in the 21st Century they are not that big a part of our economy or of what we consume – energy amounted to 8 per cent of what we bought in the early 1960s. Today it’s 2.1 per cent. Water is 1.6 per cent today. Commanding heights these are not – after all we spend 2.9 per cent on mobiles and broadband.” 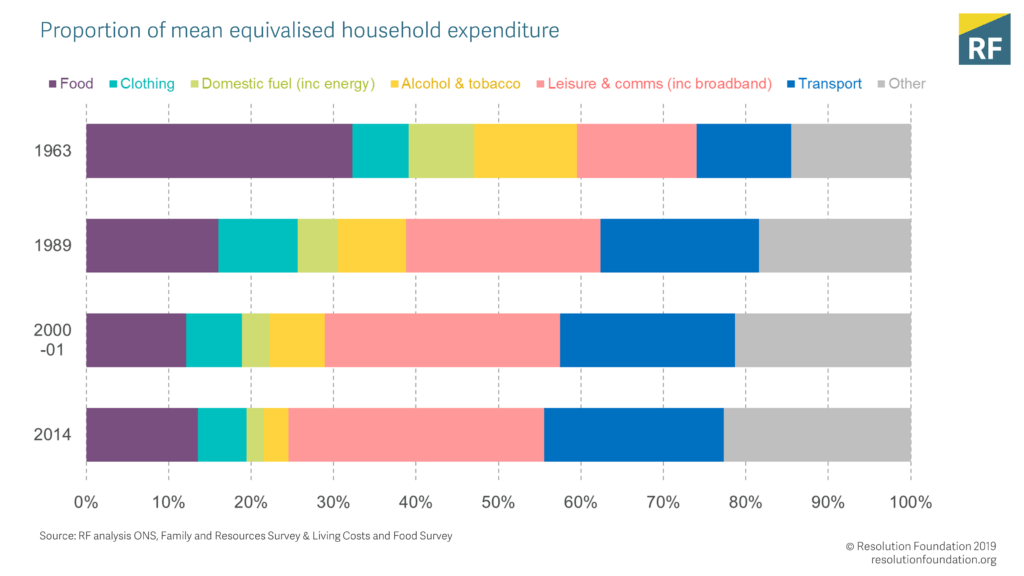 Sectors
Labour’s industrial strategy, focused on closing the (disgracefully) large regional productivity gaps, has two major legs – a huge increase in public sector investment (£25bn a year for a decade) and a plan to both create public sector banks, and direct private sector finance to support priority sectors and places. The direct investment is radical more in scale than nature (Phillip Hammond loved ramping up public sector investment), but the state-led vision for the finance sector would be a huge change.

Likewise too often Labour talks as if cash support or tax breaks for the high street can turn things around for our retail sector. This misunderstands the drivers of retail’s decline, which predates the recent surge to online shopping. Fundamentally we want to spend a smaller proportion of our money on buying things – we spend our money on take-aways, not Toys-R-Us. Now its right for policy makers to focus on sectors that decline – not least to minimise the impact on workers concerned – and the decline of our high streets as places should be a political priority. But focusing on where the country is going, not just where it is coming from, is crucial. Over the last decade, Britain’s jobs have come from healthcare and hospitality, rather than shops and factories. 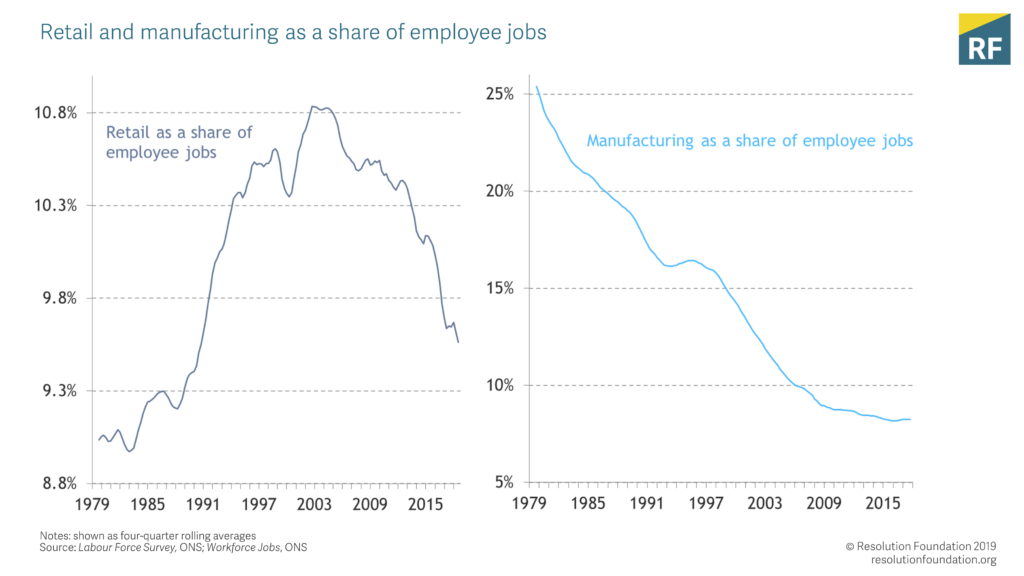 Probably the single most interesting aspect – and certainly potentially the most radical – of Labour’s economic agenda is the renewed focus on ownership and control. Two chunky policies stand out. Inclusive Ownership Funds would see shares worth up to 10 per cent of large firms issued into a workforce pot, boosting profit sharing and worker control at very significant (possibly £300bn) expense to current shareholders. Discussion has been dominated by legal issues (over to the lawyers on whether it’s illegal expropriation or not), and there are certainly some big challenges – such as a strong incentive for firms not to hire a 250th employee (normally the trigger for being classified as a large firm) or for any multinational to avoid being headquartered in the UK. More importantly the policy runs up against the challenge that it’s not clear we actually want individuals incomes to be any more dependent on which firm they work for than they currently are – you already earn more if your firm is successful than if you do the same job in a weaker rival. This is really important given wider trends in our economy – the biggest, most productive, superstar firms now account for a larger share of the economy but have actually seen their share of employment fall. We need to focus on spreading rewards beyond those already lucky enough to work in the most successful firms. 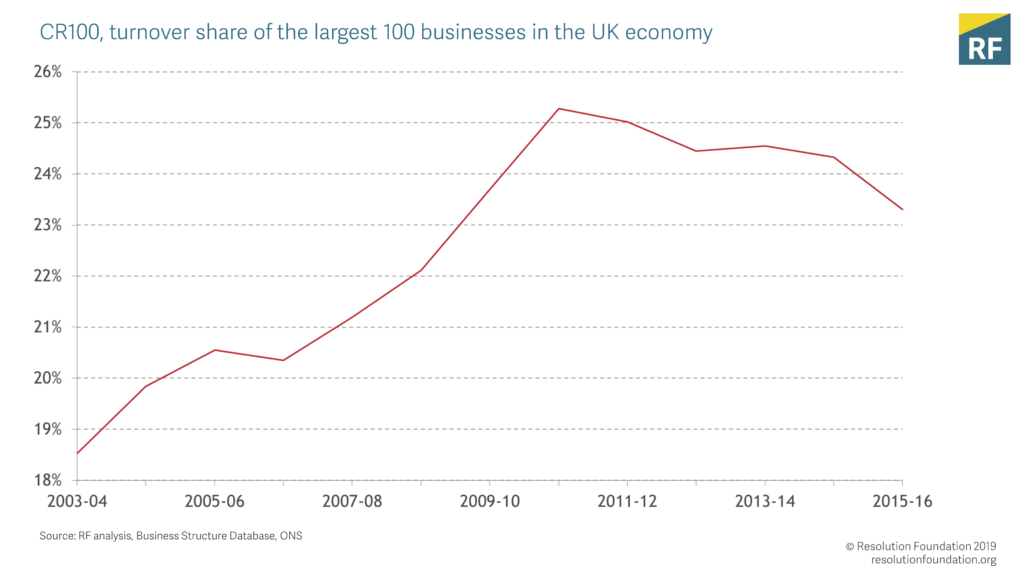 Presumably because of this concern, the policy includes a £500 per employee cap – with any dividends above that going to central government ie a tax. Some estimate that this tax element would be bigger than what workers actually get. When combined with the much higher CT rate mentioned above we are definitely into high risk territory with this policy. Personally the most important part of the policy is the control rather than profit sharing. Firms that have long said that workers on their boards would be the end of the world should maybe reconsider that policy’s merits if this is the alternative means to achieving a similar result.

The second huge policy in this area is a much vaguer, but if anything even more radical, promise to bring back sectoral collective bargaining – with wages determined not by individuals negotiating with their employer, but by national negotiations between worker and employer representatives. Any change moving in this direction (including the still hugely radical but easier to envisage wage boards setting sectoral minimum standards) is only going to be successful if it brings employers along to some degree.

This brings me to the last point – which is that Labour’s agenda is hugely radical, but they have not been nearly radical enough on coalition building. There is a growing consensus across the UK that a more equal, more productive, greener economy is needed. Conflict around big changes is inevitable – but harnessing such a broader coalition is a prerequisite for any change lasting. Whether Labour is able to build that broader coalition will determine what the history books will say.

Today they are on course to conclude: the UK faced the worst financial crisis in its history, and then left the EU. But the sliding doors alternative future is that the second clause instead reads, ‘and then took a turn to the left’. Let’s see which history gets written.