We now know that this year’s Budget will be delivered on 29 October, making it the first Monday Budget since 1962. The traditional Wednesday has been avoided, we’re told, to side-step negative Halloween-based headlines. Yet there’s still plenty of scary stuff for the Chancellor to deal with – from finding the £20 billion needed to fund the NHS boost announced in June, to the not-insignificant matter of managing our Brexit transition and contending with the UK’s highest debt-to-GDP ratio in four decades.

But what about the underlying state of the economy? In the run-up to the Budget, we’ll be looking in much more detail at how our economic performance has shifted over recent years – especially in the decade since the global financial crisis. But today’s release of the latest quarterly National Accounts data gives us a good opportunity to take an early overview. So here’s five charts setting out some high-level thoughts on the evolution of the UK economy in the post-crisis era.

1. We’ve now endured the weakest decade of growth since the ten years ending 1952

The UK economy expanded at an annual rate of 1.3 per cent in Q2 2018, broadly in line with growth in the previous two quarters but less than half of the pre-crisis average rate of 2.7 per cent. Taking account of population growth – a more meaningful measure from a living standards perspective – things look more subdued still: year-on-year growth in GDP per capita of 0.6 per cent in Q2 2018 represented just one-quarter of the pre-crisis average of 2.4 per cent.

Looking over the post-crisis decade as a whole, the chart below shows that annual growth in GDP per person had fallen to an average annual rate of just 0.4 per cent in Q2 2018. That’s the lowest ten-year average since the decade ending in 1952 and nearly a full 1 percentage point lower than the next lowest decade in this period (the one ending in 1983). 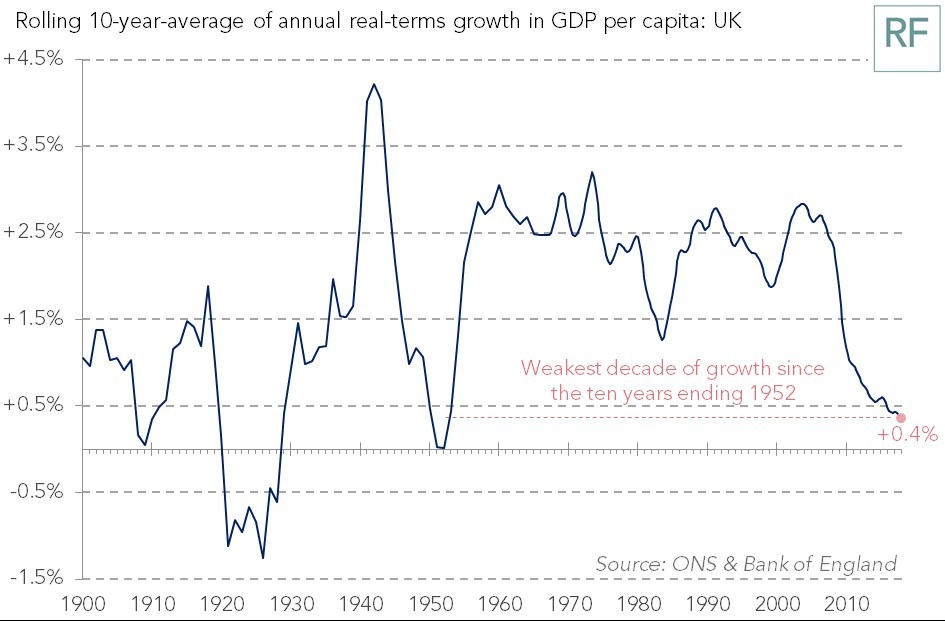 It’s hardly news that the post-crisis period has been a difficult one, but it’s worth remembering just how unlike anything in recent memory it is.

2. The poor post-crisis performance has been driven by a combination of an especially deep downturn and an unusually sluggish recovery

The next chart compares the trajectory for GDP per capita in the past decade with the ten years following the pre-recession peaks of 1980 and 1990. Two things stand out. First, the post-crisis recession was significantly deeper than either of the previous two downturns. One and a half years on from the pre-recession peak, GDP per person had fallen by 6.6 per cent this time around, compared with maximum falls of 3.8 per cent and 1.8 per cent following the 1980 and 1990 episodes.

Secondly, the subsequent pace of recovery has been much more muted in the latest period. One decade on, GDP per person is just 3.1 per cent higher than it was immediately pre-crisis. That compares with cumulative growth of 27.6 per cent and 22.8 per cent ten years on from the 1980 and 1990 downturns. 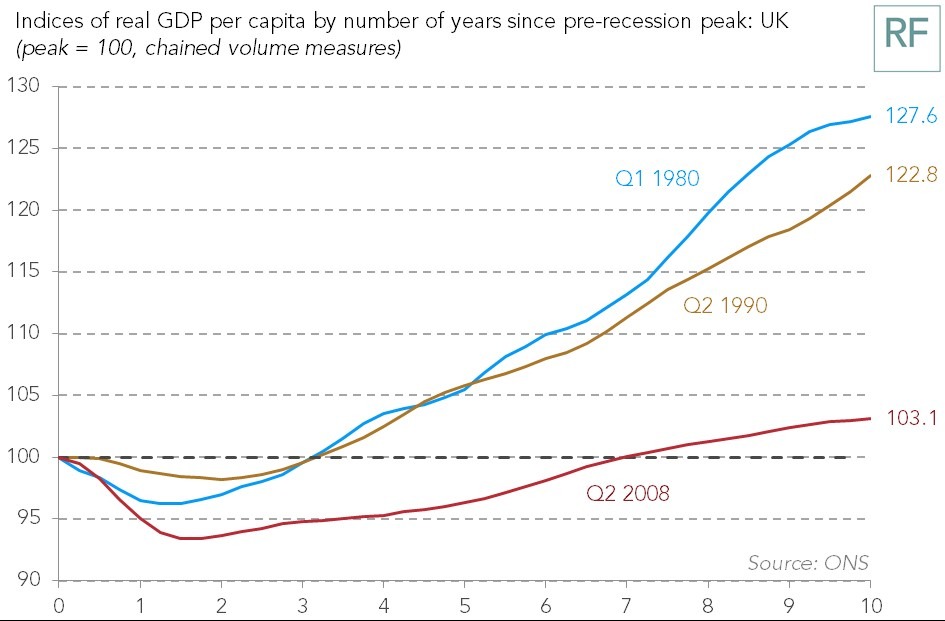 The depth of the 2008 recession is obviously a significant factor in what’s happened since, but it’s also the case that growth just doesn’t seem to be what it used to be.

3. Slower growth has been a feature across advanced economies in recent years, but the UK has under-performed relative to the US, the EU and Japan

The global financial crisis of course had repercussions around the world. As an open economy with a large financial sector, the UK was especially exposed. But, as the next chart shows, the depth of the UK’s initial drop in GDP per capita wasn’t especially striking relative to many other advanced economies. Instead, what marked the UK out was a slower recovery between 2009 and 2012. UK growth subsequently picked up, producing a modest catch-up in GDP per person between 2012 and 2016. But that relative over-performance appears to have reversed after the EU referendum. 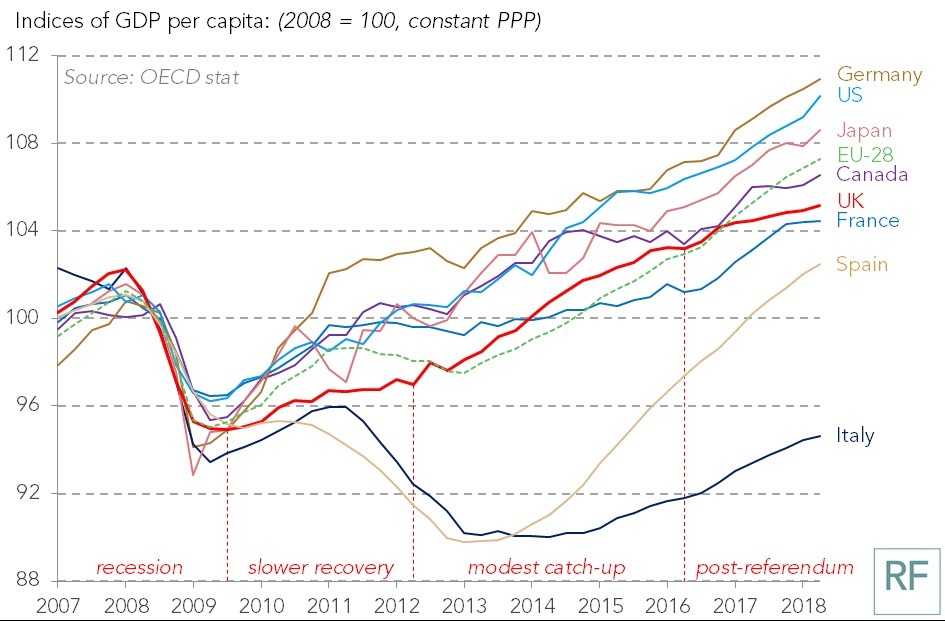 We might take some encouragement from the fact that the UK fundamentals looked no worse than other countries’ ahead of the referendum (while remembering that this was a period of sluggish global growth more generally). However, the Chancellor will of course be all too aware that Brexit itself is likely to bring still more upheaval and uncertainty in the near-term.

4. Productivity growth has returned, but at a much slower rate than we’ve been used to

Sitting behind much of the UK’s disappointing post-crisis economic performance is its collapse in productivity growth. The country has benefited from a remarkable growth in employment – a feature that has been especially beneficial to lower income households – but stagnation in the amount being produced in the UK for every hour worked has contributed to an unprecedented squeeze on earnings.

The next chart draws out the scale of this problem. Ahead of the financial crisis, UK productivity grew at an average of 2.3 per cent a year. There were ups and downs of course, but the average remained broadly unchanged over decades. Following the crisis, this growth in output per hour ground to a halt, leaving the UK’s productivity no higher in 2014 than it had been in 2007. The good news is that growth has since returned. But the bad news is that it appears to be much slower than we’ve been used to – average just 0.7 per cent a year. 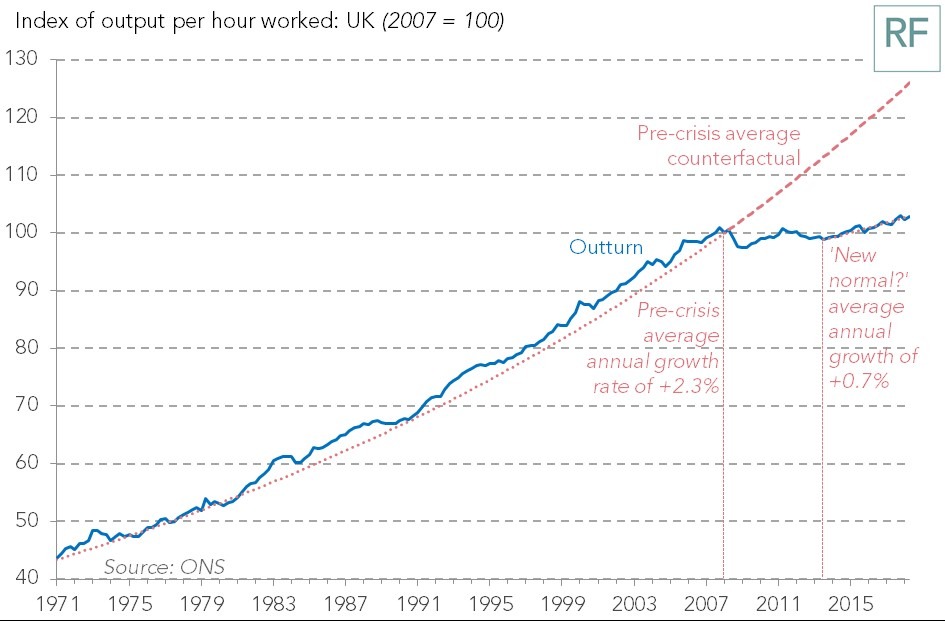 Productivity growth is central to everything that happens in the economy, making it all the more disappointing that the near-term prospects for recovery in this measure don’t appear great. Business confidence has taken a hit since the EU referendum, with many firms taking a wait-and-see approach to investment. Growth in such investment has slowed, and been negative in each of the past two quarters, providing a further headwind to productivity growth in the coming months.

5. This all adds up to an unprecedented pause in household income growth over the last decade

So what does all this economic data mean for the living standards of households? As the final chart shows, the picture is not a pretty one. Disposable (after taxes and benefits) household income per person was just 2.5 per cent higher in Q2 2018 than it was a decade earlier in Q2 2008. Income growth at the aggregate level has effectively paused over the past ten years – something we simply haven’t seen before in living memory. Indeed, as the chart also shows, aggregate income continued growing throughout the post-1980 and 1990-recessions. There were of course serious distributional differences in these earlier periods – especially over the course of the 1980s in which inequality soared – but overall the country continued to get richer.

This time around income growth has been largely uniform across the distribution. At different times different parts of the distribution have borne the brunt of – variously – employment losses, wage squeezes and benefit cuts, but ten years on from the crisis all parts of society can lay (unwanted) claim to having been affected in one way or another. 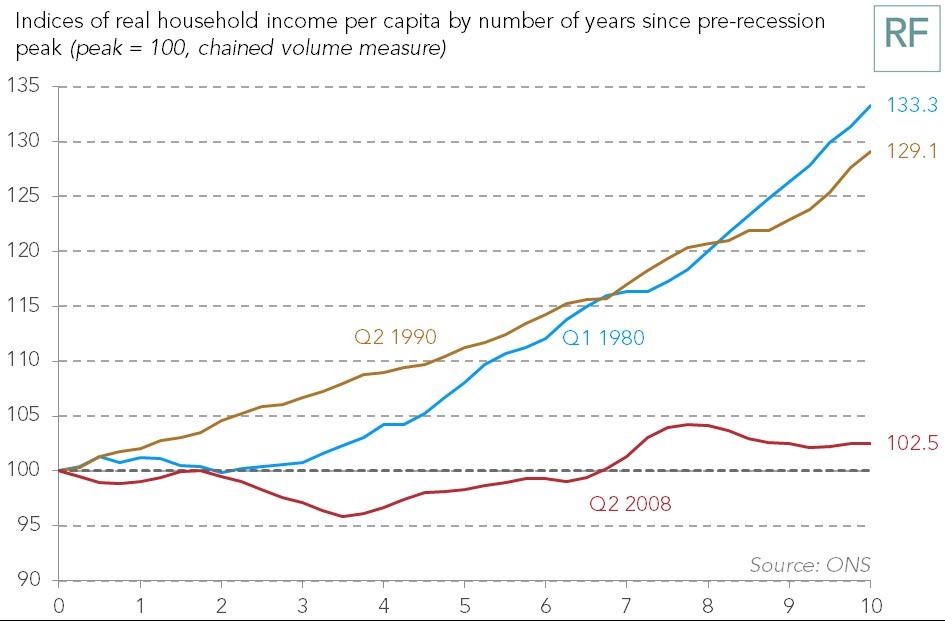 Of course we shouldn’t overdo the gloom. Record employment rates are a genuine cause for celebration, and the economy is at least heading in the right direction – the worst of the post-crisis period is behind us. And, as we saw earlier this week, the country has been getting steadily happier since 2011. But there is much that needs fixing.

As with Halloween, we can trace the routes of much of the economic malaise over the last ten years back to events in the US. But we’ve since provided our own spin. Wider political and economic uncertainty is likely to mean that Philip Hammond provides neither trick not treat in this year’s Budget, but forgive him if he wears the expression of a haunted man.