After eight years of freezes, it had started to look like successive governments’ cancellation of the annual RPI-linked uprating of fuel duty had run out of road. After all, it’s already costing the government around £9 billion a year, and that cost will grow with each passing year. But we now know that the Chancellor will announce a ninth freeze in his Budget later this month.

Choosing to cut taxes is of course a legitimate choice of government and the move will be welcomed by many for its impact on motorists, especially following a period of sustained increased in petrol and diesel prices that has returned costs to those last recorded in 2014. But, putting aside the strangely sporadic nature of ignoring the ‘default’ uprating for what is now nearly a decade, how should we judge the move? Is it a useful priority for a government caught between the twin difficulties of an ongoing living standards squeeze and a preference for deficit reduction? Here’s five quick things worth noting about fuel duty.

How does it work?

Fuel duty is levied on petrol and diesel, at a rate of 57.95 pence per litre. It’s been around for more than a century, but in 1993 a fuel price ‘escalator’ was introduced to guarantee that the tax would increase each year at 3 per cent above inflation (a margin subsequently raised to 6 per cent). The coalition government chose to remove that escalator however and, from 2011, froze the rate. This move was continued by subsequent Conservative governments, with today’s announcement relating to 2019-20 and marking the ninth successive freeze.

How much it will it cost?

We don’t yet have the September 2018 inflation figures (which form the basis for government uprating policy in April 2019), but the RPI measure of inflation stood at 3.5 per cent in August. Failing to apply that uprating looks set to cost the government in the region of £900 million in 2019-20. 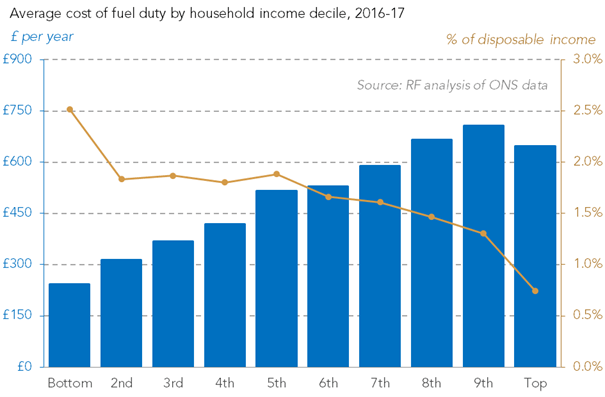 Today’s rate of 57.95 pence per litre (which we now know will remain in place at least until March 2020), is some 30 per cent lower than the rate of 82.68 pence per litre that might otherwise have been expected to apply from next April. The foregone tax revenue in 2019-20 is set to stand at £10 billion. It will rise to £10.9 billion by 2022-23 even in the absence of any further freezes over the rest of the parliament. The chart below shows how the cost has built over successive years. 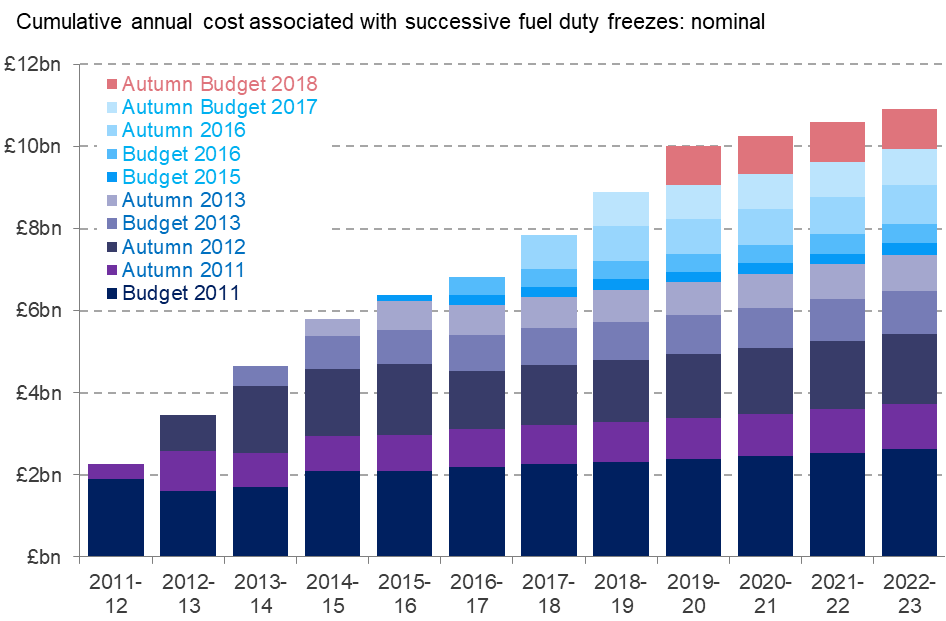 That’s a very significant amount of money, especially when put against the very difficult decisions governments have made in recent years in relation to working-age welfare. Cuts of £14 billion at Summer Budget 2015 – made in the name of fiscal consolidation and deficit reduction – continue to fall especially heavily on those in the bottom half of the income distribution. Many will simultaneously have benefited from fuel duty freezes, but such savings will barely make a dent in the reduction in support many will face.

As the next chart shows, the combined impact of a range of tax and benefit policies introduced since March 2015 (including fuel duty freezes up to and including 2018-19, but not including the latest announcement) is firmly regressive. If your priority is to ease the living standards squeeze for ‘just about managing’ families, there are clearly better ways to spend £11bn than on holding down fuel duty. 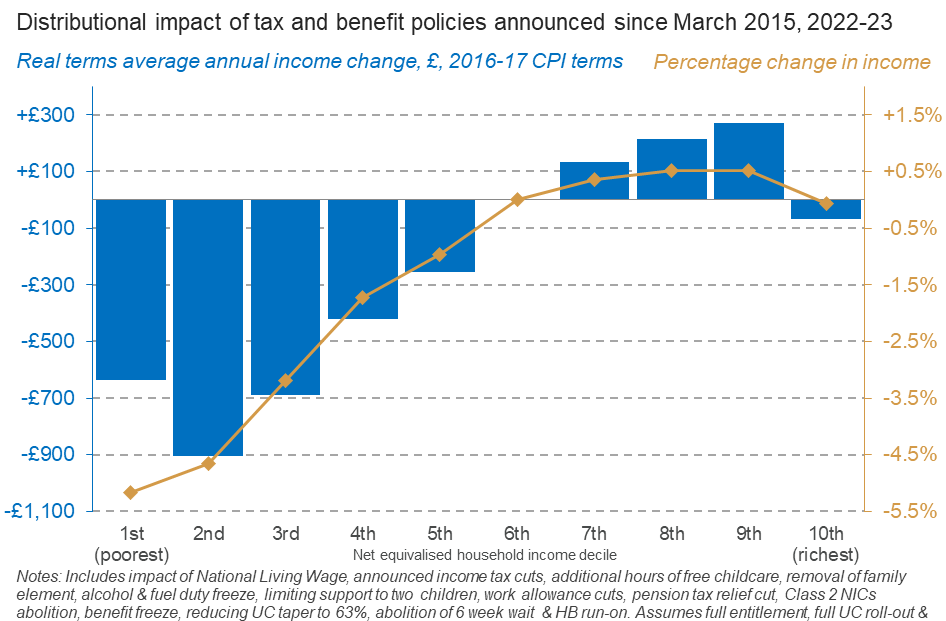 What has holding back fuel duty rises done to our overall tax base?

This is part of a wider shift away from large broad-based tax revenues such as Corporation Tax towards newer, smaller taxes like the bank levy, the soft drinks industry levy and the diverted profits tax. The incidence of our largest tax – income – has also become more concentrated on the highest earners (thanks to both rising income inequality over the last few decades and deliberate government policy), with implications for the stability of tax revenues over the economic cycle. And there’s a specific question for fuel duty – namely how the government deals with the reduction in revenues associated with more efficient cars in the first instance and with the increasing arrival of electric cars over the coming years.

For now, the government is likely to be content with an approach that allows it to take credit for a tax cut every year, but the UK’s approach to tax surely needs to be put on a more coherent standing. A nine year policy of ad-hoc fuel duty freezes is likely to have had a negative impact on the environment, on health and on congestion. At the same time, it has undoubtedly produced welcome savings for hard-pressed households. But the approach of giving with one hand and taking with another has left lower income households as the clear losers of government tax and benefit policy. Today’s announcement does very little to change that.