Debates following this week’s Budget have been dominated by political arguments about whether the Chancellor’s spending splurge means that austerity had been ended or lives on (our view: austerity was significantly eased but not ended). But another debate has been conspicuously absent this week, having dominated the UK’s political economy for the past eight years: that of the economics of fiscal policy that sit behind choices to increase or decrease spending. So why might that be and what should we be debating?

There are two big reasons economic rows about fiscal policy have taken a back seat. Firstly there is just much less of a deficit to row about, with this week’s new projections showing us heading for borrowing of £25bn this year. But the second reason it’s not being rowed about is what you might call a consensus of pessimism about prospects for the UK economy. By any standards the performance of the economy over the past decade has been dire, and that has brought about an unprecedented squeeze on living standards. Over that period growth has been noticeably above its long-run average (of 0.7 per cent) in only five of the past 40 quarters (and only once over 1 per cent in the quarter the Olympics and Paralympics were held in London). That in turn drove much of the fiscal rows about whether growth would have been so poor if public spending had not been cut back so far in the early 2010s (remember “too far too fast”).

But the consensus of pessimism today is forward looking: with little sign of growth improving, the OBR now thinks that there is little or no spare capacity in our economy (shown in Figure 1 where the red line for potential output is slightly below the solid blue GDP line – implying no output gap to be closed). This is a depressing position, assuming not just that all of the lost growth relative to pre-crisis will prove permanent but that Britain will permanently grow more slowly going forward. It means there is little scope for a row about whether fiscal policy could sustainably make a difference to growth – because this is just as good as it can get.  I call it a consensus because the Bank of England completely agrees: at today’s Inflation Report press conference Governor Carney emphasised that demand and supply are now “broadly in balance”. 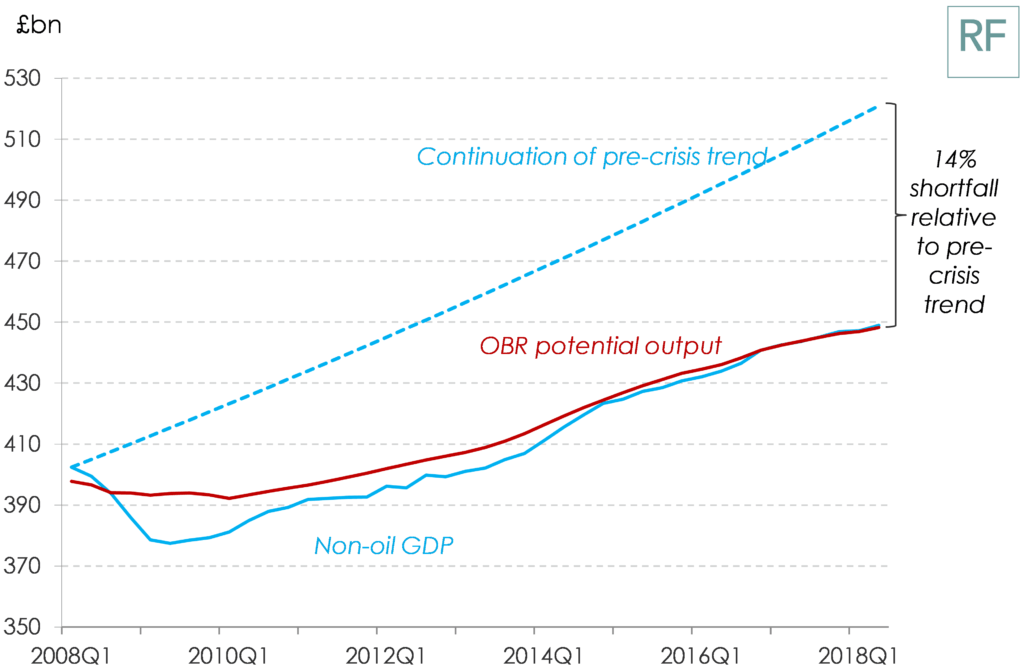 In normal economic times, and taking the OBR’s output gap assessment at face value, textbook fiscal policy should be broadly neutral: that is, not push deficits up or down once you have arrived at the deficit level that allows you to bring debt down gradually. As it turns out, this isn’t a bad description of current fiscal policy. Small changes in the cyclically adjusted deficit over the next few years (Figure 2) suggest that the fiscal policy is broadly neutral (because the change in that measure gives a sense of what government decisions are doing to annual growth). But the deficit is low enough to ensure debt is falling (although the downward trajectory is flattered by the banks repaying cheap funding received from the Bank of England – as shown in Figure 3).

Figure 2: the stance of fiscal policy appears to be broadly neutral 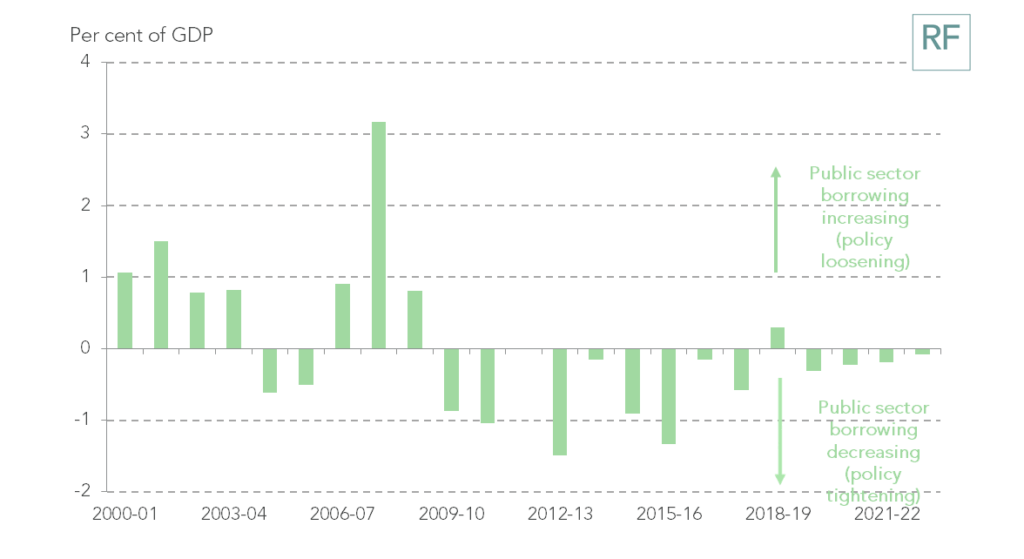 Figure 3: the trajectory for debt looks much flatter if the Bank of England is excluded

Public sector net debt as a share of GDP 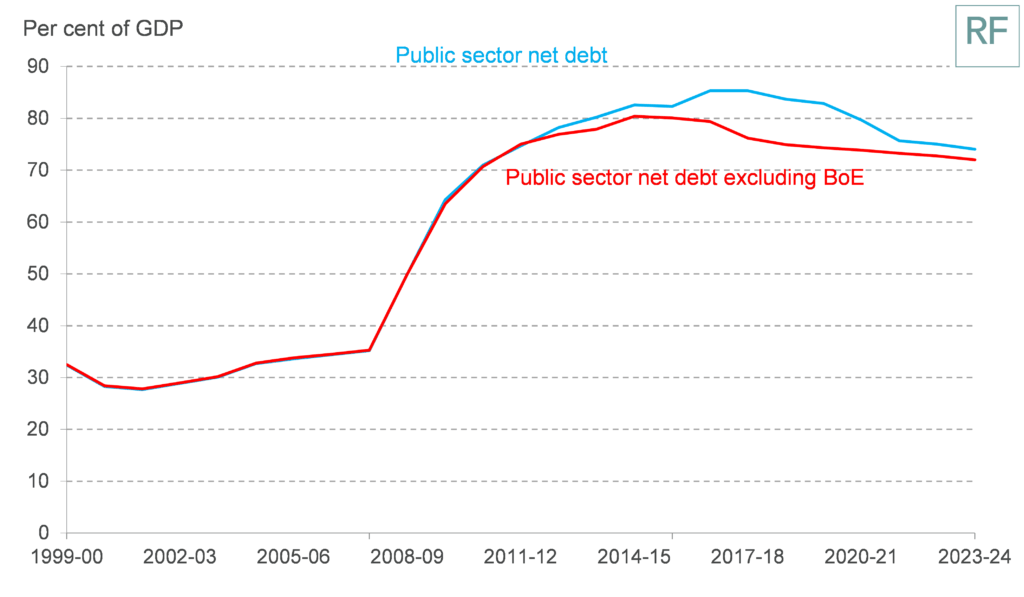 Given this, you might be forgiven for thinking that the Chancellor can get away with saying he’s delivering textbook fiscal policy and so there’s nothing to debate on the economics of fiscal policy. But here’s some reasons we might want to at least think about a debate or two.

First, there are risks to the fiscal position. By spending the windfall from the OBR’s forecast for higher tax receipts the Chancellor chose to miss the opportunity to make progress on his fiscal targets (details of spending measures can be found here). Taking what is clearly the politically expedient option could prove rash if tax receipts surprise to the downside in future as they have in the past (this is a risk that the IFS stressed this week). If you really value debt falling, but also recognise the huge political constraints on putting up taxes currently, you might think this argument is particularly strong because a Chancellor won’t be able to respond to bad public finance news from the OBR in future by simply raising taxes.

Second, there’s a strong argument that fiscal policy should respond to the risk of a disorderly Brexit, particularly if the scope for looser monetary policy is limited. Even if the risk of such a scenario is small (although a poll of City economists puts it at 25%), the OBR has said that the impact on the economy and the public finances could be “severe”. The Chancellor should factor that risk into his thinking now rather than waiting and hoping for the best. By basing policy solely on the OBR’s central case forecast, the depth of any downturn in the event of a disorderly Brexit will be larger. The case for doing so is even more powerful if you think monetary policy may be constrained by the already low level of interest rates leaving fiscal policy to do the heavy lifting in stabilising the economy.

And third, you might think the OBR’s output gap estimate is wrong and simply reject the pessimism consensus. Certainly, because of the unprecedented nature of the global financial crisis, output gap estimates must be even more uncertain than usual, although on the other hand there is evidence that our labour market at least has significantly reduced slack today. If there is spare capacity, fiscal (and monetary) policy should be looser. If estimates of potential output growth are too low, there is a risk that an overly tight policy setting reinforces weak growth. If on the other hand you think the OBR is right, then the improving the structural growth rate of the economy rather than a looser fiscal policy should be the Chancellor’s number one priority: a higher long-run growth rate is the best way to ease the funding pressure on the NHS, as well as boosting living standards.

Addressing these economic debates was not a big part of the narrative for this week’s Budget. That is understandable given other areas of focus, but if the last decade has taught us anything it’s that macroeconomic policy matters a lot, not just for Chancellors and Bank of England Governors, but for all of our living standards.