With everything that’s going on in British politics right now, it’s easy to forget that the government was celebrating some seriously good news just seven weeks ago. You might remember that the Chancellor got handed a £74 billion fiscal windfall at the Budget that allowed him to deliver the long-promised extra spending on the NHS without having to make any significant changes to his borrowing plans or push through any controversial tax rises. Indeed, he was even able to throw in an income tax cut and restore some previously-removed funds to the Universal Credit budget. Things have, of course, turned a little sour for the government since then. And they may just have got a little bit more difficult again as of today.

Usually it’s the Office for Budget Responsibility’s (OBR) sofa down the back of which extra money is found and lost; this time however it’s the moving of furniture at the Office for National Statistics (ONS) that matters. Specifically, it’s today’s conclusion of the ONS’ review of the accounting treatment of student loans that will be concerning Philip Hammond. It’s a technical exercise, and ultimately it won’t change the true cost to government of providing student loans. But, by changing the presentation of that cost, it could well have big implications for the Chancellor’s fiscal rules.

Currently, student loans are treated the same as any other loan in the public finances. In line with international accounting guidelines, loans are recorded as financial assets whereby each advance converts a cash asset into a loan asset and the loan repayment results in a conversion back to cash. This conversion means there is no direct effect on the overall level of government financial assets – and therefore no direct impact on public sector net borrowing (PSNB). At the same time, the charging of interest on loans generates an income stream for the government. The value of this expected income stream is added to the government’s loan asset, meaning the extension of interest-charging loans actually lowers PSNB. From the perspective of public sector net debt (PSND), the cost of the loan is captured. That’s because the loan asset is considered too illiquid to record, meaning PSND is simply increased by the original cash outlay. On repayment, the government’s asset is converted back from an illiquid one (loan) to a liquid one (cash), thereby lowering PSND once more.

However, student loans as currently configured don’t behave like other loans because of the very sizeable level of write-offs that occur at maturity. That is, a significant proportion of the original government outlay is expected to go unpaid and is therefore more akin to a grant than a loan. In fact, the OBR projects that (assuming policy is unchanged for the next 30 years) just 38 per cent of total principal and interest charged to students in England receiving ‘Plan 2’ loans (those in place since tuition fee increases in 2012) will ever be repaid.

This high write-off level reflects a number of factors. Some level of subsidy has always been baked into the current student loan set up, with the income-contingent nature of student loan repayments meaning no repayment is required until the earnings threshold is reached. However, lower-than-expected wage growth in the years after the current system was introduced meant the £21,000 threshold generated a higher level of subsidy than had been estimated. The threshold was then frozen to reflect this issue, but this policy was reversed by the decision in 2017 to significantly raise the point of repayment – to £25,000 – from April 2018.

This increase in subsidy represents a cost to government irrespective of how it might be recorded in the public finances. After all, as today’s loans get written-off in the fullness of time so the losses will come onto the borrowing books. But the accounting treatment of the loans generates controversy because that write-off doesn’t occur for some 30 years or so. Taking the 2017-18 student cohort as an example, the OBR estimates that accruing interest will lower PSNB by roughly £1 billion a year for each of the next 30 years. Significant write-offs don’t appear until the late 2040s – peaking at just under £15 billion in 2050-51. The fact that borrowing figures are flattered by booking the charging of interest as income therefore inevitably raises suspicion that the Treasury might choose to structure its loans in way that best secures fiscal advantage rather than one that best balances the needs of students with sustainability.

That’s where the ONS review comes in. Today’s announcement sets out a new approach – a ‘partitioned loan-transfer’ – that effectively splits the loans into a combination of lending and spending. Under this approach the element of each loan that is expected to be repaid can continue to be accounted for as currently, but the element that is expected to be written-off will now be considered a capital transfer.

As the ONS argues, this has the benefit of “better reflecting the economic substance of student loans from both the creditors’ and the debtors’ perspective”. But it is far from straightforward. Reporting this split rests on detailed – and as yet unspecified – modelling to estimate the proportion of each cohort of loans that will go unpaid over a 30-year horizon. An annual updating of the estimate to reflect changes in economic conditions and the policy backdrop would help to reduce the potential for large revisions at maturity, but the approach would nonetheless be complex.

From the perspective of the public finances, the decision is a significant one. Modelling by the OBR back in October provides an illustration of the potential effect on PSNB, as recreated in the chart below. The modelling shows how the current loan treatment lowers PSNB relative to the path that would exist in the absence of any student loans, whereas the new ‘partitioned loan-transfer’ approach will increase it. 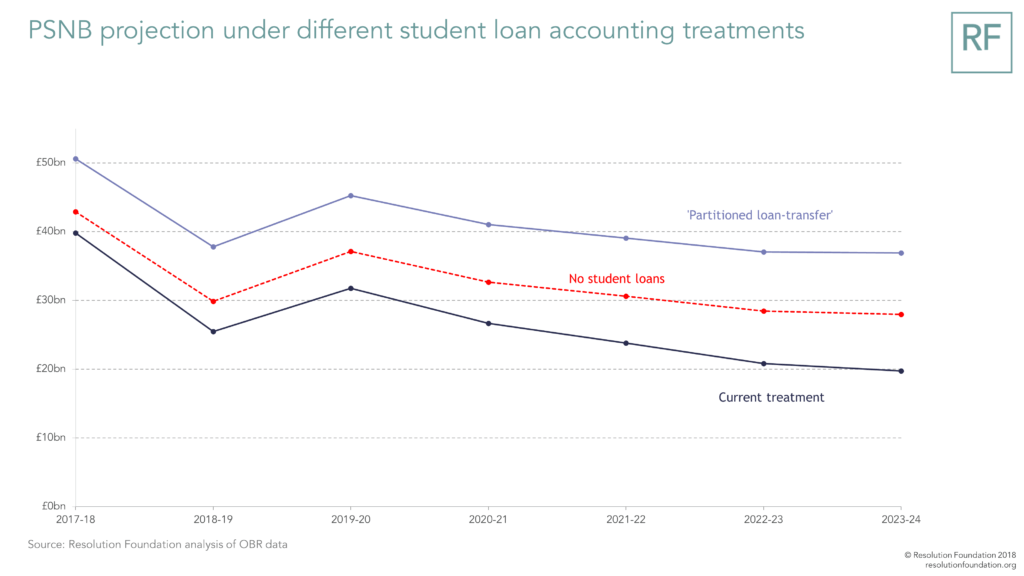 The OBR Budget estimate was that the approach settled on by the ONS today would raise PSNB by an average of £14 billion a year. In fact, if we add up the difference across the five years from 2018-19 to 2022-23 – the forecast period over which October’s £74 billion windfall was estimated – we can see that the new approach could unwind as much as £72 billion of the previous good news. And, as the next chart shows, adopting the ‘partitioned loan-transfer’ accounting treatment could reduce the £15 billion headroom the Chancellor currently holds relative to his 2020-21 fiscal mandate to just £1 billion. 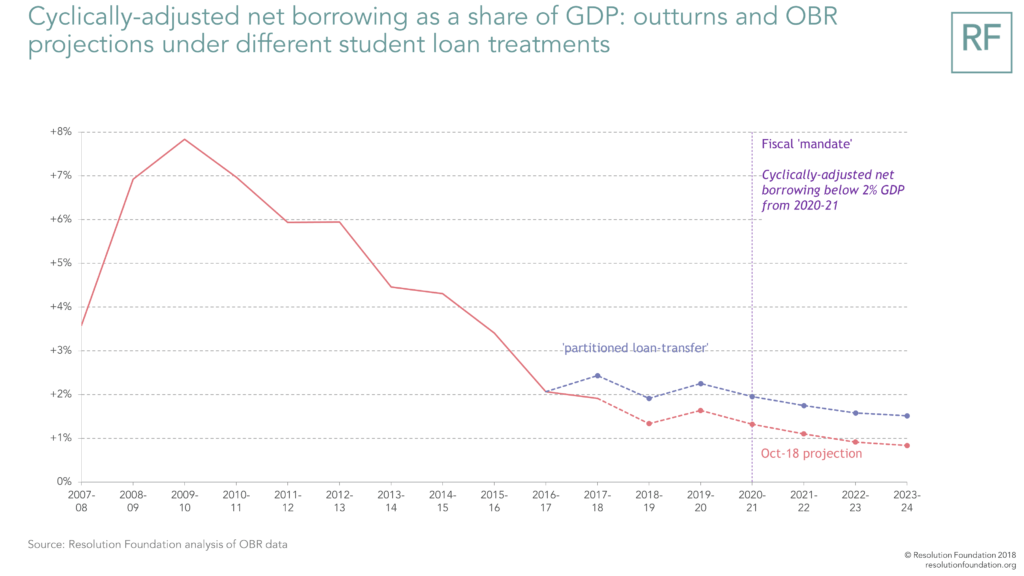 The Chancellor has previously argued that that he stands ready to make use of this headroom either to support the economy in the case of a no deal Brexit, or to provide more funds for public services once it becomes clear that a deal has been struck – one part of an anticipated double “deal dividend”. The removal of all but £1 billion of his headroom would make a difficult Brexit process harder still.

The good news for the Chancellor is that the ONS doesn’t intend to implement the change until September 2019 (and has made it clear that the complexity involved in designing this new approach means that delays may arise). That provides a deliberate window in which the government can adjust its policy.

It’s response could range from changing the repayment rules in a way that lowers the levels of write-offs (by lowering the £25,000 earnings threshold or by removing the interest charge on outstanding debt for example), to a more fundamental review of its approach to student fees and finances. The Augar Review of post-18 education funding is already charged with looking into current practices – in further education as well as higher education – in some detail. Significant enough policy changes could head off the change in accounting rules before it ever arises.

Alternatively, the government might choose to sidestep the ONS ruling by declaring that the Chancellor’s fiscal mandate will continue to be measured using a version of the cyclically-adjusted PSNB that excludes student loans. If that runs the risk of being criticised as a sleight of hand, then the Chancellor might take the opportunity to review the details of his fiscal rules more generally. Indeed, because the ONS has stated that the non-loan element of its new approach will count as capital (rather than current) spending, he could adopt a new fiscal mandate that focuses on the current budget rather than overall borrowing, as is the case at the moment.

Each response would generate its own political challenges, and the Chancellor might be forgiven for deciding that he has more pressing matters to worry about in the near-term. However, he will inevitably face questions about what’s happened to the Brexit “deal dividend”. And his hand might be forced by the OBR choosing to adopt the new ONS approach in its Spring Statement projections. Enhanced transparency in the approach to student loans in the public finances is undoubtedly welcome, more fairly exposing the trade-offs associated with public subsidy of the costs of providing higher education. But, just seven weeks on from the good news of the Budget, don’t expect the Chancellor to be leading the cheering.