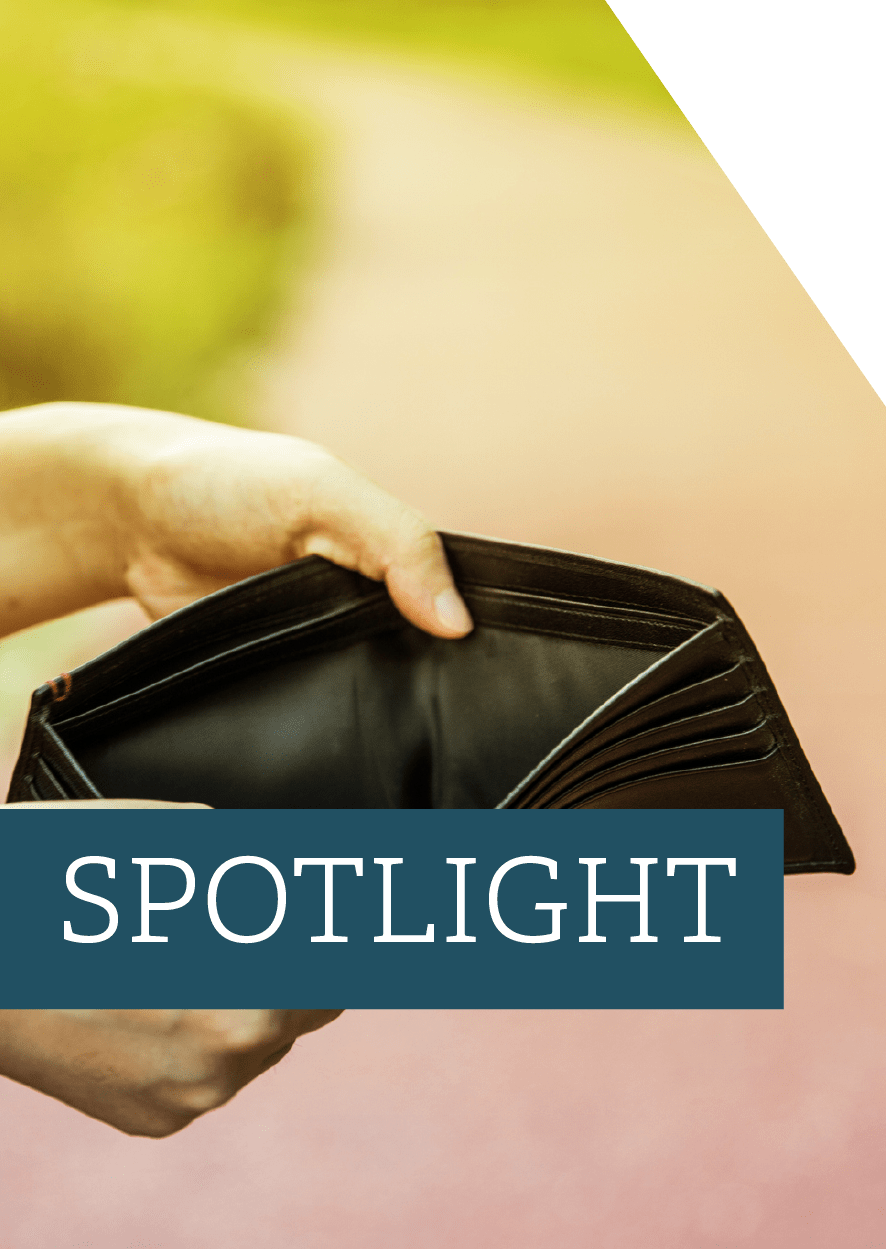 Inflation reached a 40-year high in April off the back of a sharp rise in energy bills and the highest food price inflation in a decade. These recent drivers of inflation mean that lower-income families are facing the most severe cost pressures, with their inflation rate already hitting double digits. Families are already responding to all this with around a third of those facing rising costs cutting back on essential spending, such as food. The living standards implications of this economic crisis are huge, but the Government has the power to support those hardest hit by bringing forward benefits uprating – something which is needed to prevent this parliament being the worst on record for living standards.

We always knew that April was going to mark a bleak milestone in the cost of living crisis – with the 54 per cent rise in the energy price cap taking effect on 1 April, increasing bills by £693 for a typical family – likely to send inflation soaring. And so it came to pass today: CPI inflation rose to 9 per cent – its highest rate since 1982. It is not just the level of inflation that standouts historically, but also speed of the rise: the two-percentage-point jump from March (Figure 1) was the biggest monthly increase since April 1980.

While rising energy bills have driven the latest inflation surge, they are not the only place where price pressures are rising. Food inflation hit 6.7 per cent last month – the highest since 2011 – while durable goods, which have seen global increases in demand, rising by 8.5 per cent in the past year – the second highest level on record. 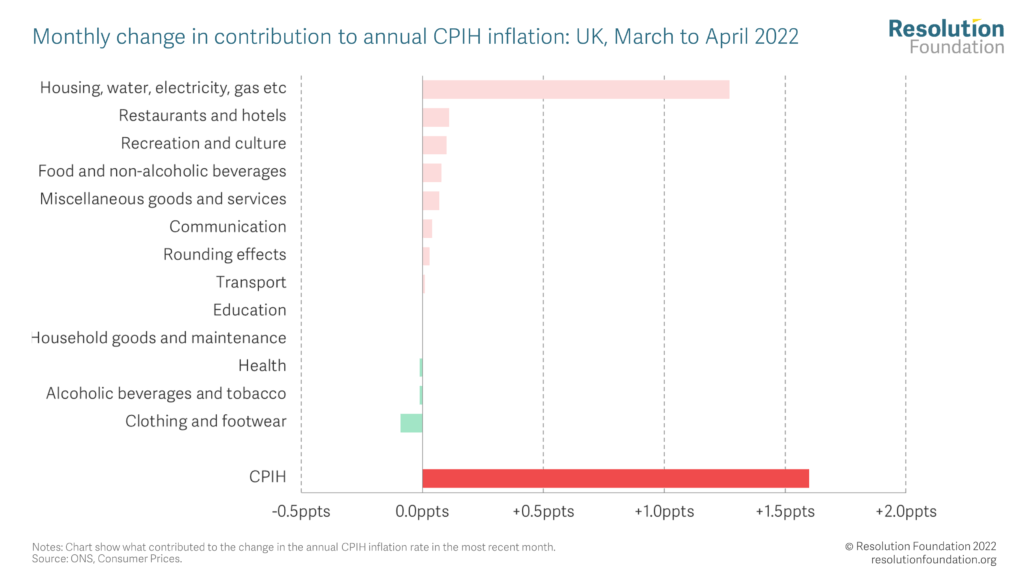 Why has this happened, and what does the future look like?

The big picture of rising inflation since the turn of the year has been driven by rising global energy costs making their way into consumers’ pockets. Some of that impact was quickly felt – petrol prices rose quickly to their highest real rate since 2012. And some of the impact on consumers was temporarily delayed through the energy price cap. But the impact of the rise in gas prices has now fed through to inflation in April. This will happen again in October when the price cap is likely to rise sharply again, pushing up to three-in-ten households into fuel stress. Unfortunately, there will also be a delayed impact from rising energy prices as they feed through into the prices of other goods and services. In this context it is worrying that UK manufacturers’ input prices were rising at an annual rate of 18.6 per cent in April, with some of those costs set to feed through into higher prices for consumers.

Exchange rate moves may also mean inflation rises further in the coming months – as it did in the wake of the financial crisis and the EU referendum. The pound has depreciated by 10 per cent against the dollar since January, though the devaluation on a weighted aggregate measure against all currencies was a far more modest 3.8 per cent.

Together this paints a bleak picture for the real incomes of those relying on benefits. Figure 2 shows just how far the value of unemployment benefits will fall before next year’s uprating.

Figure 2: Higher inflation is driving down the value of benefits as uprating has failed to keep up the with living costs 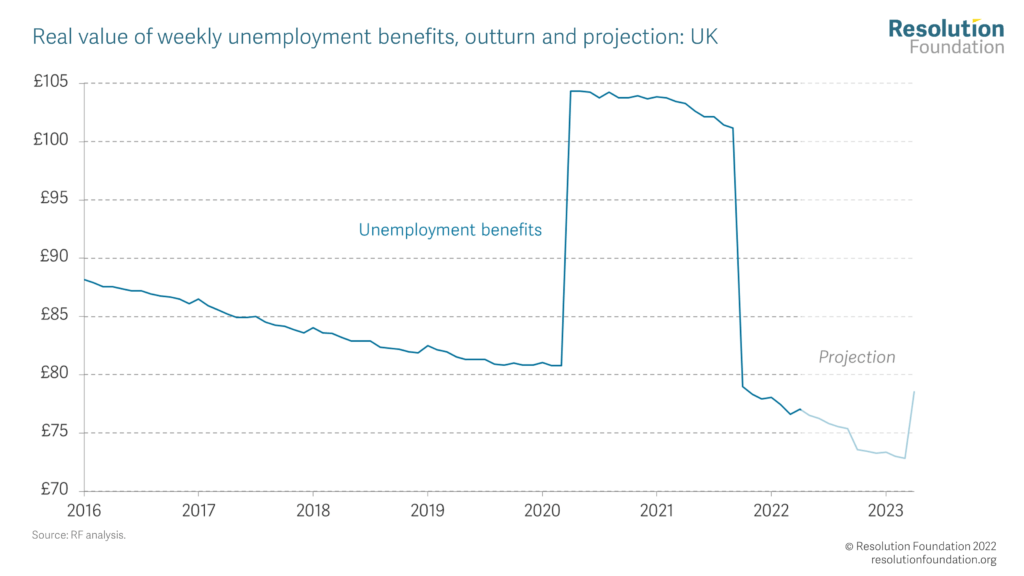 What is the impact of high inflation?

High inflation is causing an acute cost of living crisis. The latest Bank of England forecast shows total real household disposable income falling in 2022 by the second largest amount since records began in 1964. Our own analysis shows disposable incomes for a typical family falling by around 4 per cent, even after accounting for Government support – equivalent to a £1,000 annual income loss. That forecast, based on the OBR’s more benign inflation forecast from March, is looking scary, but today’s inflation data show the situation is much worse than those OBR projections.

Lower income families are more exposed to rising cost of living, and not just because poorer families have fewer places to cut back spending. The poorest tenth of households (by income) spend three times as much as a share of expenditure on gas and electricity bills as the richest tenth. This means the lowest income tenth of people are facing an inflation rate at least 1.5 percentage points higher than the richest tenth (Figure 3). A few weeks back the Bank of England warned the UK could see double-digit inflation later this year. Today’s data shows poorer households are already living with it.

Figure 3: The rise in gas and electricity bills has disproportionality increased the cost of living for low-income families 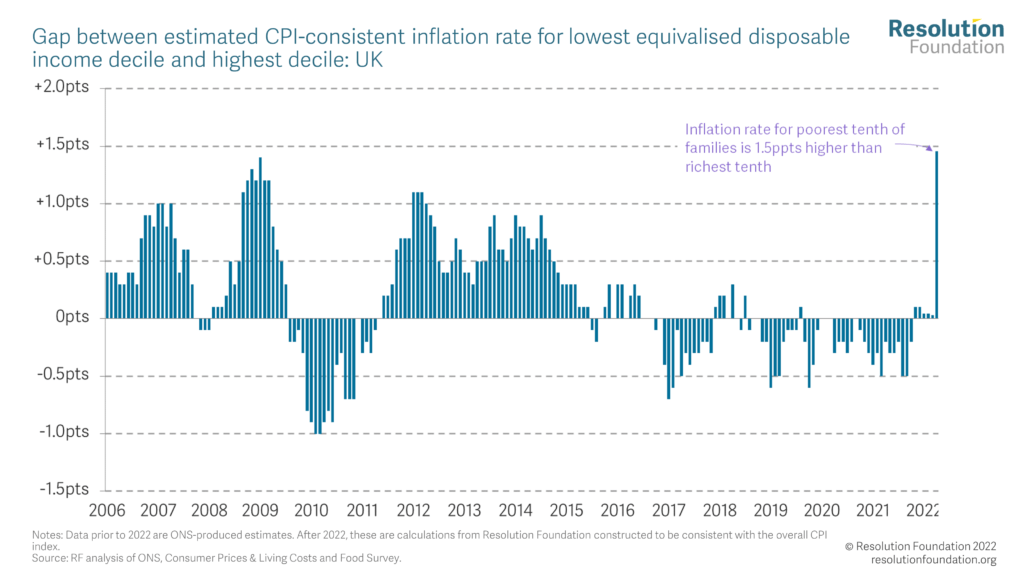 Indeed, ONS data showing how families are already being forced to take action to cope with high inflation. A survey covering the end of April and early May found that 88 per cent of people were facing rising living costs. Of this group, around half were ‘using less fuel such as gas or electricity in my home’, a third were ‘spending less on food shopping and essentials’, a quarter were using savings, and one-in-eight were ‘using credit more than usual, for example, credit cards, loans or overdrafts’.

The problem is that, because lower income households spend more of their total budgets on essentials, it’s harder for this group to cut back on discretionary items or substitute to cheaper versions of products (as they have already done this). Put another way, there’s simply no option of cutting back on posh meals out as these are not part of spending in the first place.

Lower income families are also far less likely to be able to draw on savings. Yes, the pandemic saw a £180 billion savings bonanza, driven by ‘enforced saving’ during lockdowns. But it was mainly accrued by better-off families – in 2021 the highest income fifth of families were four times as likely to say that had increased savings during the pandemic than the lowest income fifth.

Of course, the other way to get through the cost of living crisis is to work more and earn more, as some MPs have been helpfully telling people. But we’re already doing the former – ONS data yesterday showed unemployment falling to a 40-year low. And while nominal wage growth is healthy at just over 4 per cent – that’s nowhere near enough to match the rising cost of living (Figure 4). As a result, real average wages are falling at their fastest rate in almost a decade. 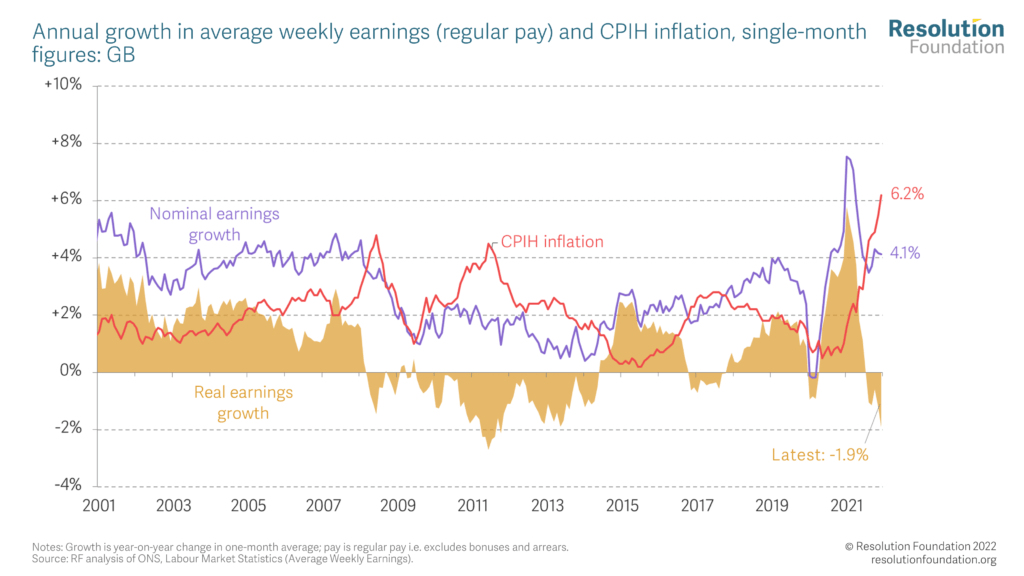 Some people are managing to secure inflation-busting pay rises, largely as a result of a bumper bonus season that’s up 30 per cent on last year. But again, these workers are not those at the sharp end of the cost of living crisis. In March 2022, nominal pay increases at the 95th and 99th percentile (i.e. the very top earners) were 7 per cent and 11.1 per cent respectively, compared to just 0.9 per cent at the 10th percentile (though this data precedes a big rise in the National Living Wage in April that will benefit the lowest earners).

All of this is made more difficult by the economic context

The cost of living crisis is coming on the back of a prolonged period of low-income growth. The latest Government forecasts were that real earnings would not rise above the 2007 peak until the end of 2026 – and with inflation rising even more rapidly than expected it could turn out to be even later. And looking at disposable incomes (Figure 5), this parliament is set to be the worst on record.

Figure 5: This is set to be the worst parliament for living standards growth on record 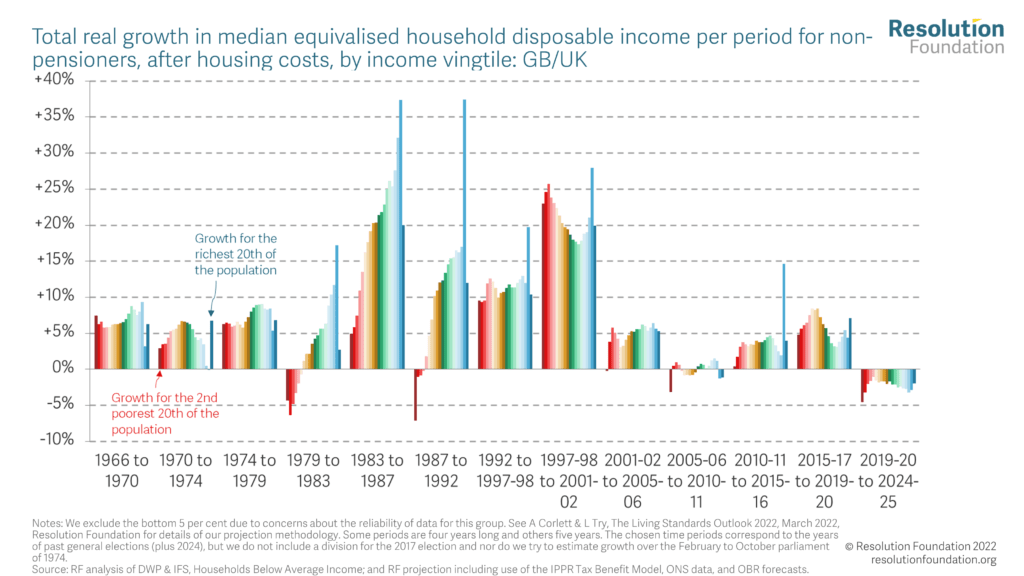 Tackling the cost of living crisis is not easy. The Chancellor is right to say that the Government cannot protect everyone entirely from a global inflation shock. But that doesn’t mean nothing can be done – it can – and the framework for where support should go is straightforward. In the short-term, the Government should target support at those lower income households at the sharp end of the crisis. Fortunately, they can be easily targeted via the benefits system, specifically by bringing forward inflation uprating for the inflation that families are experiencing now, rather than waiting until next year. Last month’s 3.1 per cent increase is the equivalent to a real-terms cut of £15 billion this year.

In the long-term, clearly stronger economic growth is needed to create the space for robust, sustainable pay rises. Of course, everyone says they want stronger growth. Actually delivering it is far harder, as we’re learned painfully over the past decade. What we need is a new economy strategy for the 2020s – one that looks forward to the future challenges of net zero, while also addressing our legacy of low growth and high inequality. No political party has that strategy yet. But if they’re looking for help, may we humbly point them in the direction of our Economy 2030 Inquiry….