The UK has spent the first quarter of 2021 under renewed restrictions to slow the spread of Covid-19. As the third England-wide lockdown began in January, many businesses were forced to close once again, and the number of jobs furloughed through the Job Retention Scheme (JRS) rose to 4.8 million. There is growing light at the end of the tunnel, in the form of a continued successful vaccine rollout and the Government’s roadmap setting out prospects for reopening the economy, but the labour market faces challenging months to come.

At the beginning of March, Rishi Sunak presented his second Budget since becoming Chancellor last year. The main policy news for the labour market was the extension of the JRS and the Self-Employment Income Support Scheme (SEISS): both are now expected to last until the autumn, and the JRS will be phased out from July through gradually increasing employer contributions. The extension of support in line with the roadmap for easing restrictions led the Office for Budget Responsibility (OBR) to revise its forecast for the unemployment peak down to 6.5 per cent, compared to 7.5 per cent in its November forecast.

Only time will tell whether this is an optimistic stance: the OBR projection implies relatively few people moving from the JRS into unemployment, despite an expectation that 2 million jobs will still be furloughed by September. But so far, the impact of the crisis on the labour market has remained much more muted than many expected. The unemployment rate was 5.2 per cent in Q4 2020, up from 4.0 per cent on the eve of the crisis but much lower than the Bank of England and the OBR had initially expected. Real-time data on employee jobs is more pessimistic than the Labour Force Survey, with the latest figures suggesting that 726,000 fewer people were on company payrolls in January 2021 than at the start of 2020 – but even this fall is remarkably low considering that at the same time, GDP was nearly 8 per cent down on pre-crisis levels.

Data on earnings is more difficult to interpret, however. While earnings fell during the first lockdown, real regular pay growth has since risen to rates last seen in 2002, reaching 3.6 per cent in the latest single-month Average Weekly Earnings data. But as this Outlook’s spotlight will show, strong growth in average pay does not necessarily reflect good news for individual workers. Our ‘Lifting the Lid’ section (available in the PDF download) looks at sub-regional falls in employee numbers, job-to-job moves, and the change in zero-hours contracts over the course of 2020.

Interpreting labour market statistics during the Covid-19 crisis has been fraught with challenge. On the employment side, changes in the headline employment and unemployment rates have been difficult to reconcile with the fall in employee numbers implied by HMRC’s payroll data. But pay data has been more counterintuitive still. Earnings growth fell in the early months of the pandemic, and briefly became negative, driven in part by many furloughed workers receiving only 80 per cent of their usual pay. But more recently, both nominal and real earnings have begun to grow at rates not seen since the early 2000s, as Figure 1 shows. This is in stark contrast to what happened to earnings after the financial crisis: nominal earnings growth fell, and real earnings growth turned negative. Earnings took more than a decade to return to pre-financial crisis levels, doing so for the first time only in the three months to February 2020, on the eve of the current crisis.

Figure 1: Earnings growth has reached levels not seen since 2002 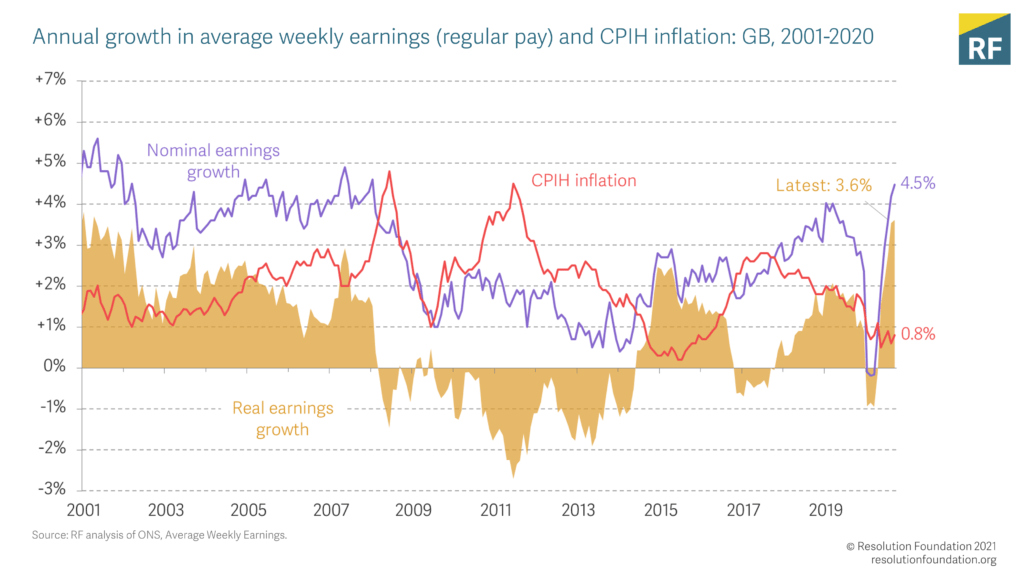 On the surface, a return to earnings growth might seem like a boon for workers after over a decade of pay stagnation. But as the ONS has noted, at least part of this is down to compositional effects – as lower-paid workers have been more likely to lose their jobs, the average person still in work is higher-paid. In our last Earnings Outlook, we noted that the main compositional drivers of earnings growth have been occupation, hours, and qualifications.

What is happening to earnings growth underneath these compositional effects?[1] Figure 2 uses regression analysis of Labour Force Survey (LFS) data to isolate the changes in pay after accounting for changes in workforce composition.[2] In the LFS, average gross weekly earnings rose by 5.6 per cent in the year to Q4 2020; after adjusting for other characteristics, the underlying growth in mean pay was half that rate (2.8 per cent). Similarly, growth in median pay was 4.1 per cent before adjusting for other characteristics; after adjusting, it was just 2.0 per cent. Underlying pay growth is therefore much more in line with the last few years than the headline rate – though notably, even after adjusting for compositional factors we do not see signs of the falls in pay growth that followed the financial crisis.

Figure 2: Adjusting for workforce composition accounts for some, but not all, of the growth 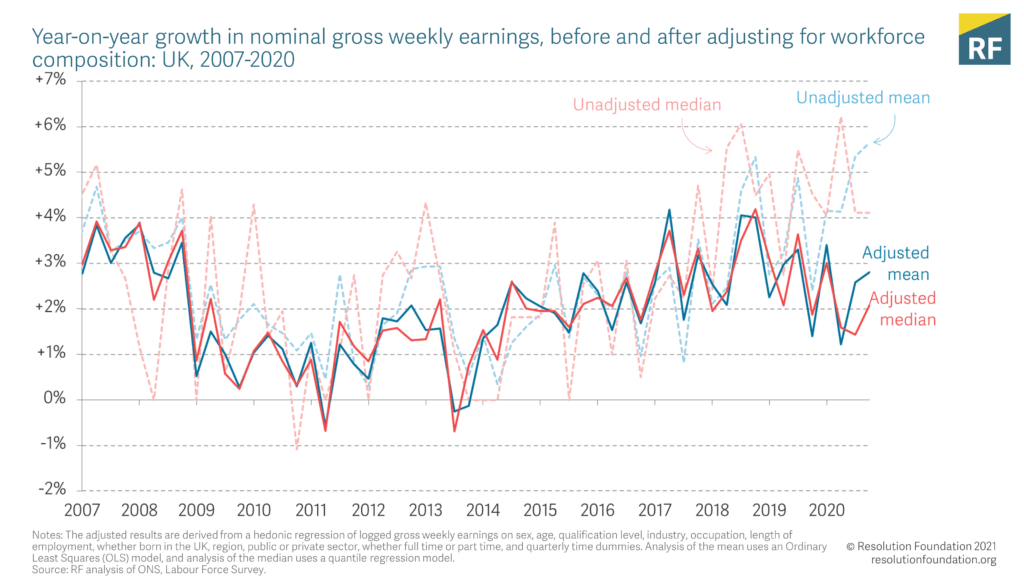 The fact that growth of mean pay is higher than that of median pay in Figure 2 also indicates that growth is not spread evenly across the distribution. Figure 3 uses quantile regressions to look at pay growth at different points in the earnings distribution, whilst still controlling for employee characteristics. Pay growth at the 75th percentile has remained relatively stable over the course of 2020, falling from 3.1 per cent in Q1 2020 to around 2.5 per cent thereafter.[3] Pay at the 25th percentile, however, has been much more volatile – here, there was a much more discernible earnings fall in Q2 2020, likely in part to reflect the fact that low earners have been more likely to be furloughed.[4] Composition-adjusted pay growth fell to 0.2 per cent, and only recovered to 1.6 per cent by the end of the year. More positively, there is evidence that pay growth was stronger at the very bottom of the distribution: the series is much more volatile and so is not shown in Figure 3, but pay growth was around 3.5 per cent at the 10th percentile in the second half of 2020, likely reflecting the minimum wage uplift in April.

Figure 3: Growth has been much weaker towards the bottom of the distribution 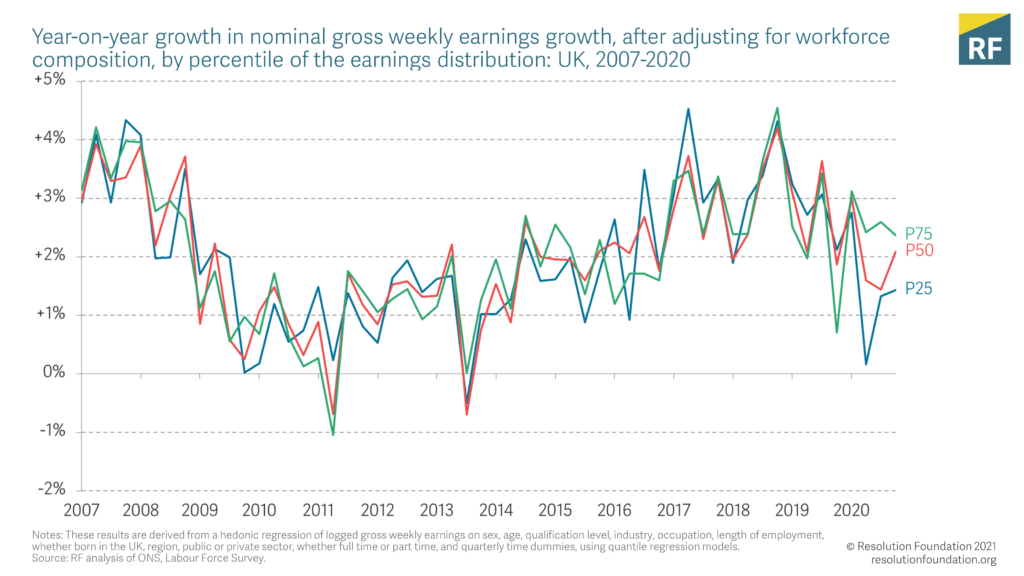 The charts above show us how average pay, and pay at other points across the distribution, are changing. But another measure that is important for living standards is whether individuals who stay in work from one year to the next experience a pay rise.[5] Figure 4 tracks the median of all individuals’ percentage change in weekly earnings over the course of a year. The impact of the crisis on changes in individuals’ pay is stark: the median pay change over the year to Q3 2020 was just 0.3 per cent among people who stayed in the same job, and 0.6 per cent across all workers, the latter representing a real pay cut of 0.2 per cent.[6] By Q4 2020, the typical worker had received a pay rise of 1.8 per cent over the preceding year (or 1.0 per cent in real terms) – an improvement, but still the lowest since 2013.

Figure 4: In Q3 2020, the typical person who stayed in their job experienced annual earnings growth of just 0.3 per cent 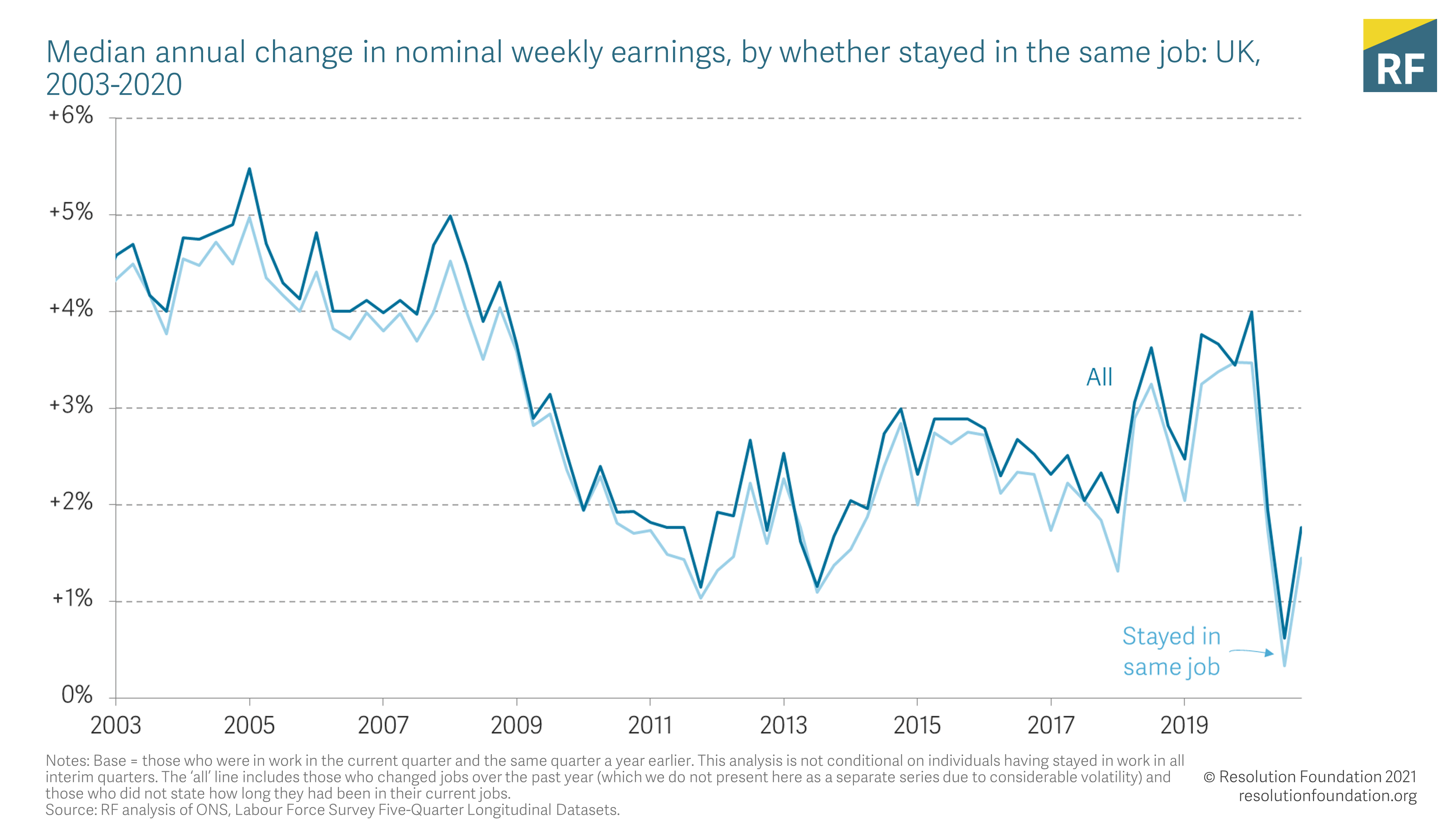 Some groups of workers have done better than others. Figure 5 shows how the median pay change over the year to the second half of 2020 varies across different groups of workers, and how this compares to a year earlier. While the young and the low paid who are still in work have had above-average pay rises over the past year, these workers would normally experience a much larger pay boost in a normal year conditional on staying in work – and the typical pay rise for 18-24-year-olds has halved compared to 2019, from 12.3 per cent to 6.0 per cent.[7]

Pay changes also vary significantly by industry: sectors like manufacturing and education have been relatively immune to falling pay growth (at least among those who are still in work), but after accounting for inflation of 0.8 per cent, the typical worker in sectors like professional services, construction, transport, and leisure and other services has seen a real pay fall. And altogether, 49 per cent of employees – or more than 13.5 million people – had experienced a real pay fall in the second half of last year.

Figure 5: The typical employee in the professional, admin, agriculture, and construction sectors has faced a pay freeze, and pay has fallen for the typical transport worker 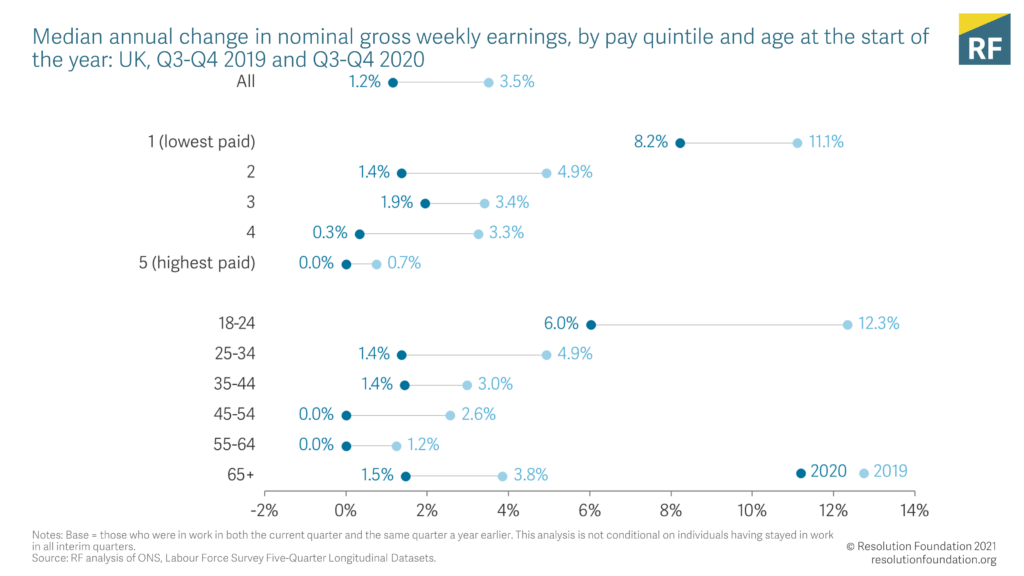 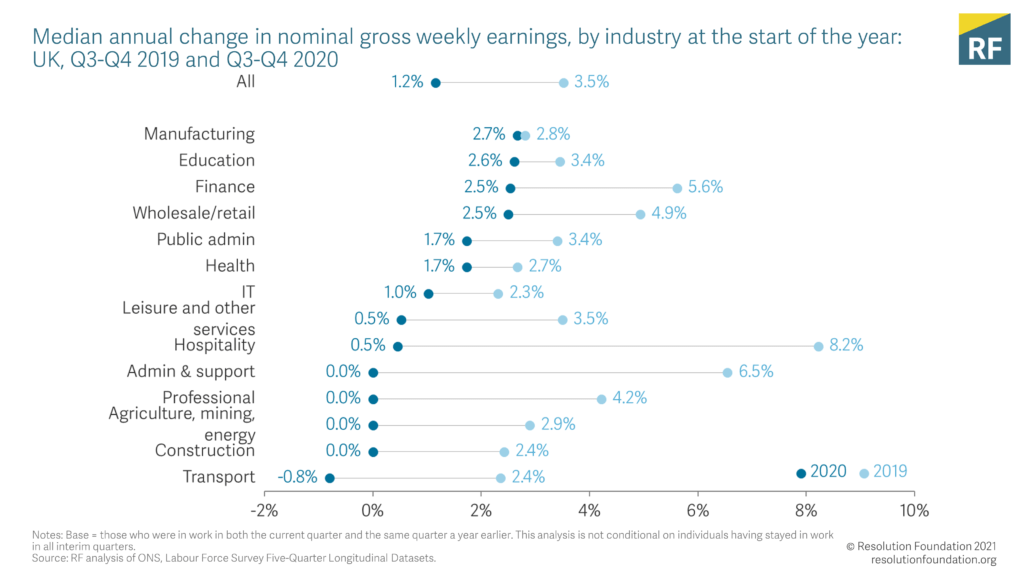 Some of the sectors with below-average pay rises are those where the employment hit has been concentrated, too. In 2019, the typical worker in the hospitality sector saw their pay grow by more than 8 per cent (accounted for in part by moves into higher-paying sectors); this year, the typical pay rise was just 0.5 per cent. But others are more unexpected. The median worker in the professional services sector experienced a pay freeze, despite the fact that workers in this industry have been more likely than average to be able to work from home. Many of those in sectors that have been relatively sheltered from pandemic-related job losses and furloughing are nonetheless facing an economic hit.

Beneath the headline figures, then, pay trajectories in 2020 look a lot less rosy: around half the growth is due to compositional changes in the make-up of the workforce, while close to half of those in work have experienced a fall in their real earnings. Weak pay growth is likely to continue beyond this year, however. The incidence of pay freezes doubled between 2019 and 2020, rising from 5 per cent to 20 per cent of settlements, and the public sector is set for pay freezes in 2021-22. And in the longer term, the OBR expects real earnings to be 4.3 per cent below the OBR’s pre-crisis forecast by 2025. After the financial crisis, it took six years for average weekly earnings to start growing again in real terms. Returning to employment growth and a tight labour market as quickly as possible, alongside continued increases in the minimum wage to support lower-paid workers in particular, will be crucial for boosting living standards as the recovery takes hold.

[1] Changes in weekly earnings can be driven by both changes in hourly pay rates and by changes in the number of hours worked. In this spotlight, we focus on weekly pay because of its importance for living standards; however, the broad patterns presented here still hold when we run the same analysis for hourly pay.

[2] While the LFS is not the usual source for earnings data, it has the benefit of including a range of personal and job characteristics that we can use as controls. The LFS may be more prone to recall error than other sources, however, and so caution should be taken when interpreting exact rates of change. For more information, see: Office for National Statistics, A guide to sources of data on income and earnings, March 2021.

[3] Because this analysis adjusts for compositional drivers of pay, the 75th percentile will reflect employees who are still high-paid after adjusting for their personal and job characteristics.

[4] Furloughed workers are still included in the earnings data, as they are still getting paid. However, many will only receive 80 per cent of their previous earnings up to a cap of £2,500 (the amount covered by the Government) unless their employer tops up the remainder.

[5] For more on why this is an important measure, see: L Gardiner, Who’s been getting a pay rise?, Resolution Foundation, March 2015.

[7] Conditioning on still being in work a year on has a greater compositional impact on lower-paid and younger workers than on other groups. While the average young or low-paid worker who is still in employment a year on is likely to see significant pay progression, these groups are also more likely to no longer be working at the end of a year. This also partly explains why these results suggest that the earnings of low-paid workers have grown faster than those of the higher paid, in contrast to the results of the quantile regressions shown above: the quantile regressions include those who will go on to stop working (as well as adjusting for a range of employee characteristics).