Brexit is happening, but big tax cuts aren’t. That’s the short version of the already fairly short Conservative Manifesto. This manifesto does not tell us much about what the Conservatives would do after 31st January 2020, but it does confirm the country faces a big choice in this election on the size of the state it wants.

Last week Labour doubled the scale of their spending ambitions from their 2017 manifesto, aiming to repeat the closing of the poll gap with the Conservatives seen in the final weeks of the 2017 campaign by committing to a £135 billion increase in the size of the state. The Conservatives reading of those very same weeks, and the dementia tax row their 2017 manifesto triggered, has taken them to a very different conclusion: election campaigns aren’t the moment for risks, tough choices or home truths. As a result it’s worth reflecting on both what is, and what isn’t, in the Tories’ 2019 Manifesto.

Brexit has certainly made it in. And ultimately, that’s the first and last of what this election is about for the Conservatives. But they are also doing enough on the domestic policy side to be able to say that austerity is over. The spending taps are going back on, whoever wins this election. But the Conservative version is nothing like on the scale Labour intends. While Labour proposed £83 billion (or £95 billion after the addition of a major WASPI pledge) of additional day-to-day spending, the Conservatives are proposing just a further £3 billion. The Conservative plans therefore represent a much slower roll-back from the years of austerity. For many public services that would mean that tough times are here to stay.

Taking all this together, both main parties propose increasing the size of the state from its current 40 per cent but to staggeringly different end points. While Labour is aiming for a German size state (44 to 45 per cent of GDP), funded by a big increase in taxes and huge borrowing for investment, the Conservatives think 41 per cent will do, as Figure 1 shows. 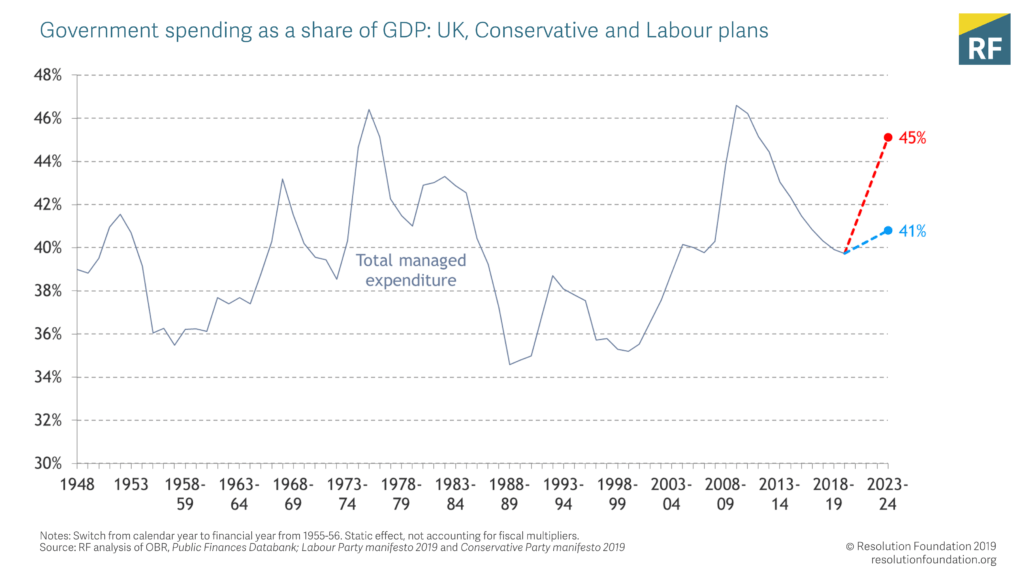 Reflecting that we are at the end of a decade of austerity, the Conservative plan would amount to the biggest increase in the size of the state (1.1 percentage points) under any Tory Prime Minister since Harold Macmillan. Boris Johnson’s political hero may be Winston Churchill but, as Figure 2 shows, his spending habits are more akin to Supermac.

Figure 2: When it comes to increases in the size of the state, Boris Johnson has more in common with Supermac than his political hero, Winston Churchill 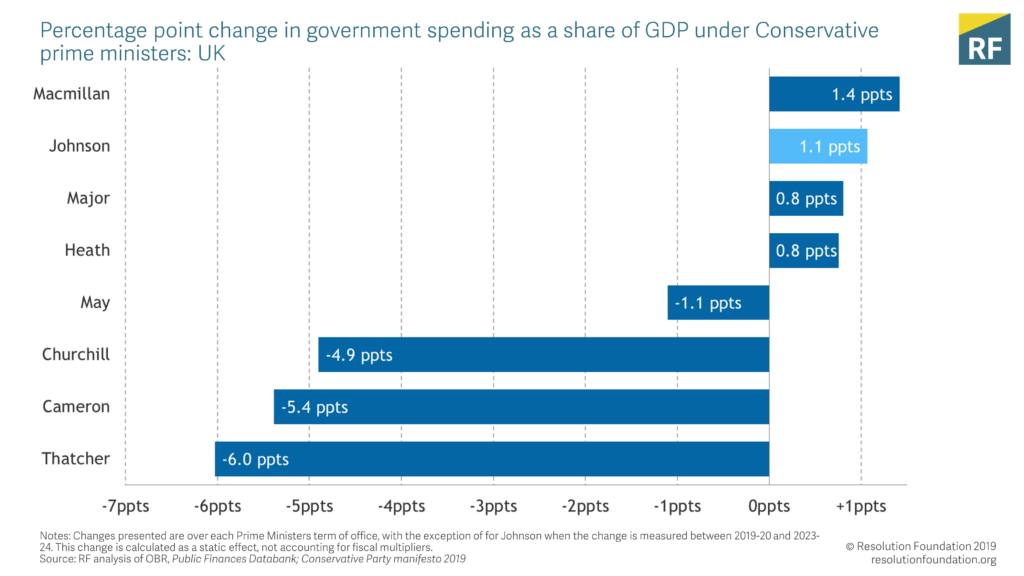 The big thing (very sensibly) missing from this manifesto is huge tax cuts previously promised by Boris Johnson. During and soon after the Conservative leadership election he proposed tax cuts totalling over £20 billion in lower National Insurance (NI) for most workers and Income Tax for higher earners. The Conservative manifesto however only actually commits to a fraction of that ­- £3.5 billion of tax cuts – in a net overall tax-raising package.

Almost all (£2.5 billion) of these tax cuts goes on the trailed (perhaps accidentally) rise in the National Insurance threshold. This would apply to employees and the self-employed, but not to employers.

In the near-term, this would raise the tax’s starting point to £9,500 in April 2020. This compares to a level of around £8,800 under default policy (which would be an increase from 2019-20 in line with CPI inflation). For employees it would be worth around £85 a year, and for the self-employed (who pay a lower rate) £64. Dual-earning couples would benefit twice (as would those with multiple jobs),[1] helping to explain the distributional pattern in Figure 3.

Figure 3: The impacts of the tax cut in 2020 would be small but – in proportional terms – would be spread relatively evenly across the income distribution 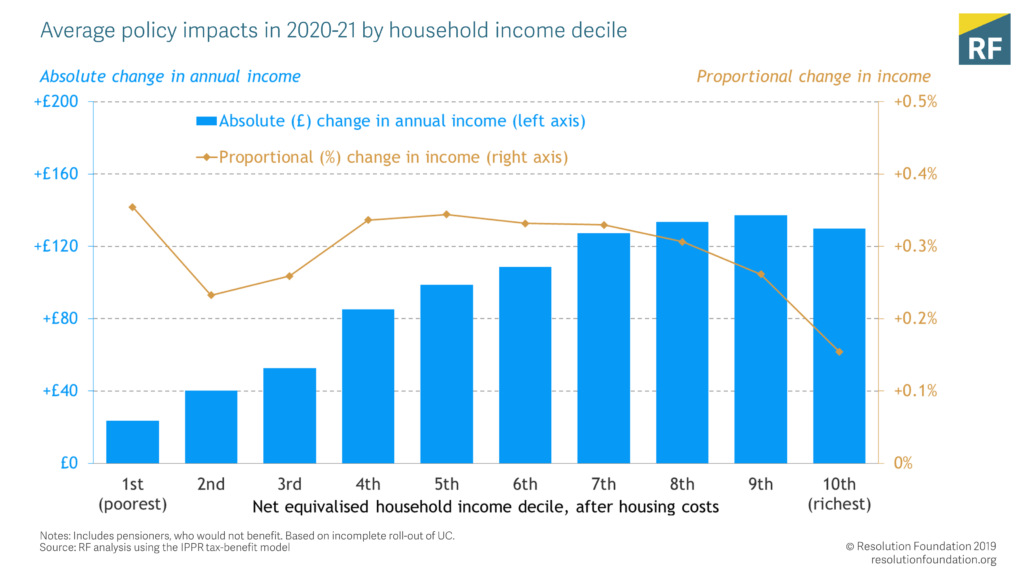 Workers in families that benefit from Universal Credit (UC) would receive less, as UC is means-tested based on net earnings (ie after tax). Such employees – including the majority of National Insurance paying single parents, for example[2] – would see their UC reduced by £54, leaving them only £32 (a year) better off. So the workers who need the greatest help with the cost of living would – on top of years of welfare cuts – see the smallest gain. Furthermore, the manifesto does not contain any measures to reduce the large cuts to social welfare that will continue to roll out, leaving the huge legacy of austerity for social security untouched.

The stated intention is that further tax cuts would follow, with the threshold ultimately being increased to £12,500. However, a timeframe has not been announced (we might assume 2023 or 2024), and nor has funding. This is a significant oversight given that a £12,500 threshold in 2023-24 would cost £9 billion. Subtracting the 2020 tax cut, which is funded, this leaves a £6 billion hole in the Conservative manifesto.

In any case, raising the National Insurance threshold to £12,500 may well not mean aligning it with the income tax personal allowance. Although the latter is set at £12,500 in 2019-20 and 2020-21, it is set to increase in line with inflation each year after that. So it is not expected to be £12,500 after April 2021. Indeed, by 2024-25, it might be around £13,500 on current inflation projections, as Figure 4 shows. Alternatively, the income tax allowance could be frozen at £12,500, but this would be a multi-billion pound tax rise that would leave pensioners worse off. Greater clarity would therefore be welcome.

Figure 4: By the time the National Insurance threshold is increased to £12,500, the level of the income tax allowance is likely to be higher 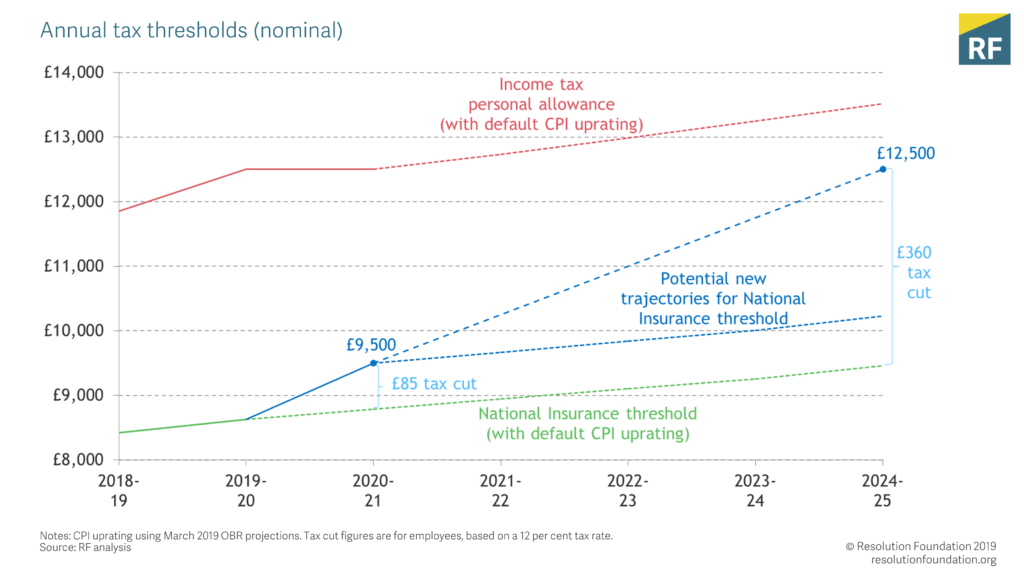 However without this further NI cut funded, this is actually a tax raising manifesto rather than the bonfire of taxes that might have been expected. This is because both the tax cuts and extra current spending noted above have been paid for by the welcome scrapping of the planned 2020 reduction in the corporation tax rate. Coming on top of previous reductions, the planned cut from 19 per cent to 17 per cent was unwise, while cancelling it will increase revenue by around £6 billion a year. With other parties proposing to also reverse earlier cuts – as we show in Figure 5 below – it is clear that the corporation tax rate in 2020-21 will now be 19 per cent at a minimum.

Figure 5: The cancellation of the planned cut to corporation tax is welcome 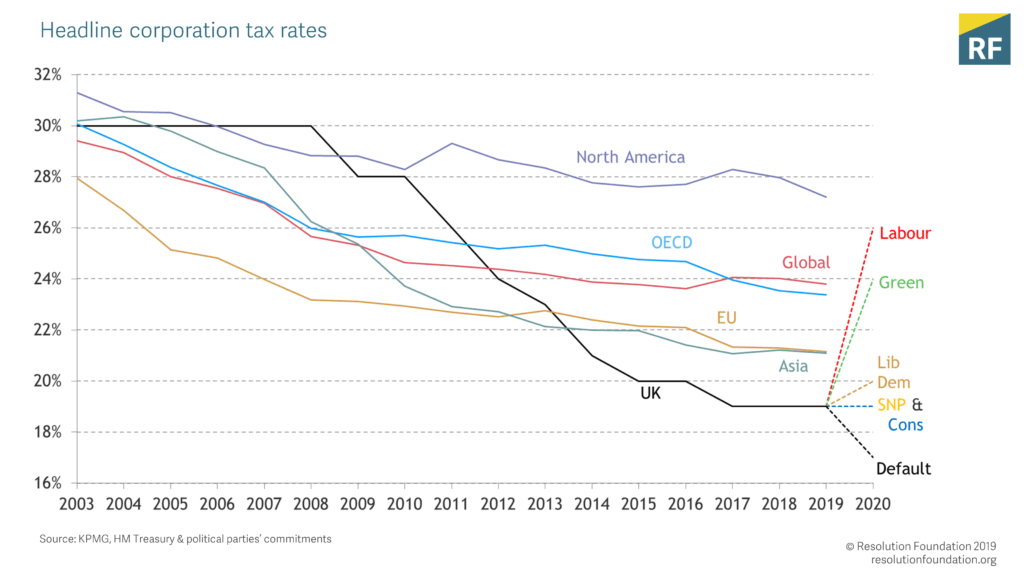 The result is that the tax take is also set to grow under a potential return of Boris Johnson to Downing Street, albeit more slowly than the UK state is set to grow under Labour’s plans – as shown in Figure 6. A tax take of 38 per cent of GDP will be on a par with recent highs, and the highest since 1985.

With an ageing society likely to require a growing state simply to maintain existing services,[3] and some substantial sources of revenue (notably fuel duty) at risk in the medium-term,[4] this is a decade that is more likely to require sustained tax rises rather than cuts. 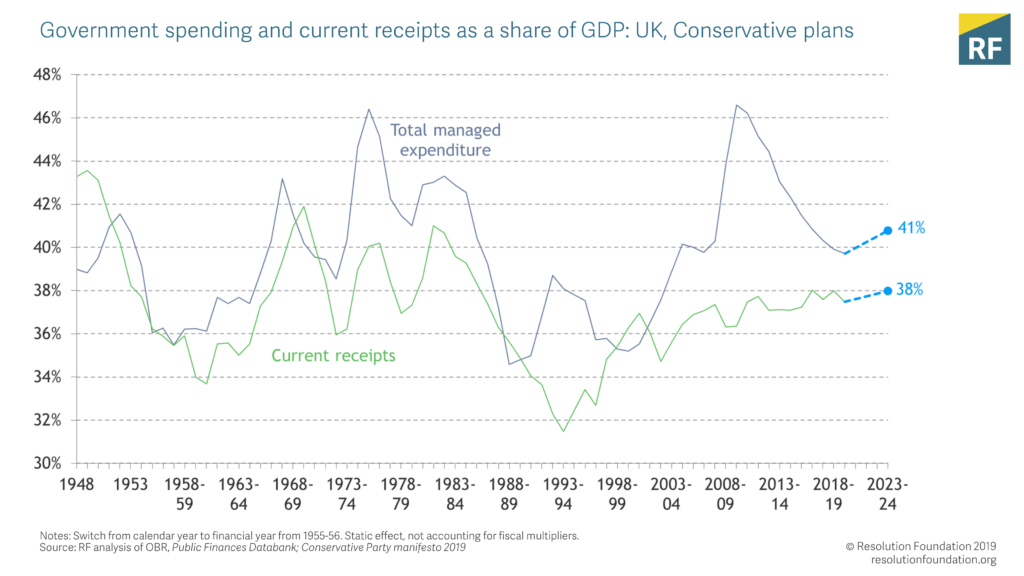 We have set out our views on the Conservatives new fiscal rules elsewhere, but it is worth reflecting on one specific area where Conservative views have changed a lot: debt. Since 2010, the Conservative (and coalition) government have always had a fiscal rule to reduce debt – although the exact time period and definition of the rule has changed several times.

This Conservative manifesto confirms that they now want to take a new approach that we have called for, focussing on the overall cost rather than level of debt. They are looking to ensure the costs of debt interest remain below 6 per cent of tax revenues.

This change of priorities is reflected in the fact that, under the manifesto plans, debt is expected to fall at around half the rate per year compared to the pre-election forecast. And half of that fall is also driven entirely by the accounting treatment of the Bank of England unwinding it’s Term Funding Scheme (Figure 7).

Indeed, the government only really aims to reduce debt by a very modest 3 per cent of GDP over the next five years – something that would be wiped out by even a small economic or public finance deterioration.

Figure 7: The Conservative manifesto implies government debt will fall slower than expected before the election 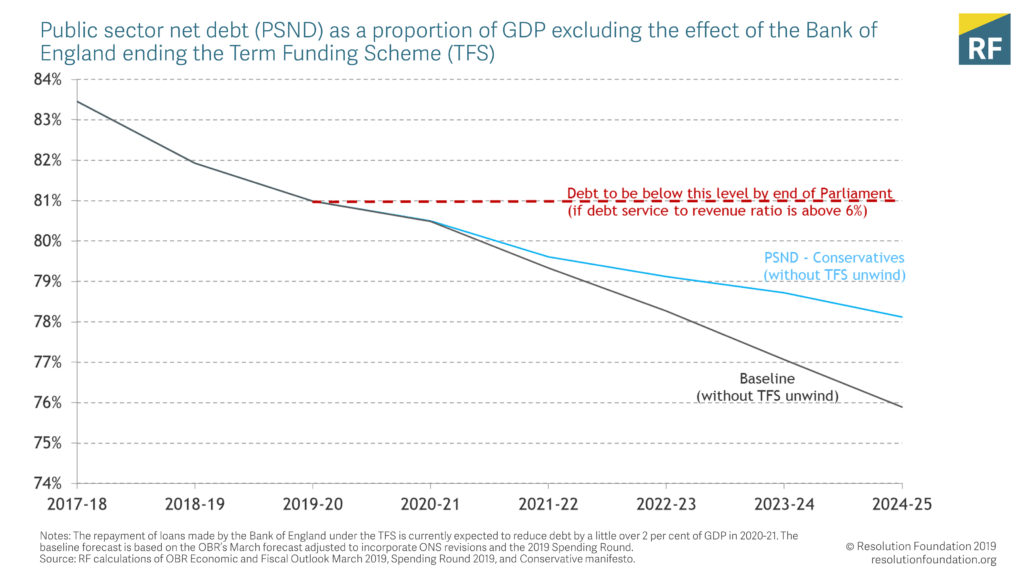 Alongside a cautious approach on tax cuts and spending increases, Boris Johnson has chosen to reject central aspects of his predecessors approach from 2017. A few stand out.

The ruling out of any rises in the main taxes (income tax, NI and VAT), which Philip Hammond notably refused to make in 2017, returns. This will put pressure on the rest of the tax system if it turns out that significantly more revenue is needed for whatever reason.

The plan to scrap the triple lock of pensions has been jettisoned – meaning that the main pensioner benefit will continue to rise faster than those for working age families. This relative treatment is hard to justify given the weaker performance of working age incomes in recent decades. It is however noticeable that unlike Labour, the Conservatives have set aside no money to fund universal TV licences for the over 75s.

The Conservative Party have also been sufficiently traumatised by the dementia tax debacle of 2017 that they have set out no plan at all for a lasting solution to the social care crisis we face. This is despite Boris Johnson promising to do so on the steps of Downing Street after his leadership election win.

This is a very modest manifesto from the Conservative Party – enough additional spending to end austerity, but at a pace that is much slower than we might have expected. The limited ambition is particularly in evidence as the very large tax cut promises from the leadership campaign have been dumped. The contrast to the Labour manifesto, which was the exact opposite in proposing a radical change on tax and spend, leaves the country facing a very large choice on the size of the state it wishes to see.

There is another result of the Conservative decision to have a very light manifesto. It doesn’t do much to enlighten us what exactly a Conservative government would do after the 31st January 2019, when they intend for the UK to have left the European Union. Maybe we shouldn’t be surprised. The Conservative Party want this to be an election about Brexit, and Jeremy Corbyn.

[1] National Insurance operates on a per-job basis, so someone with two jobs, or with sufficient employment and self-employment income, would benefit twice. Some might even receive triple the benefit or more.

[2] Once UC is fully rolled-out

[3] M Whittaker, The shape of things to come: charting the changing size and shape of the UK state, Resolution Foundation, November 2019

[4] A Corlett, The shifting shape of UK tax: charting the changing size and shape of the UK tax system, Resolution Foundation, November 2019