Fiscal rules matter. They play a vital role in shaping a new government’s tax and spending plans and give a big picture sense of a party’s approach to economic policy. Today, both main parties have set out their own new fiscal rules – and the fact that they are both new tells you a lot: the turning of the political and economic cycles means parties are now competing on how to increase spending and borrowing plans, rather than on how to reduce them. Today they are resetting their fiscal rules for that reality – and in both cases drawing on recent Resolution Foundation work to do so.

The big picture here is both parties setting out plans to borrow for investment – both on a significant scale, but particularly sizeable in Labour’s case. On day-to-day spending, the two parties have set out plans that are looser in the short term than those inherited from Philip Hammond. But the change is much more modest than we are seeing on investment. Both are committed to paying for day-to-day spending out of taxation. Just not quite yet.

Sajid Javid inherited three fiscal rules from Philip Hammond, and has set out three new ones today. But that’s where the similarities end. The previous rules required HM Treasury to ensure:

All these targets are now gone – and indeed on course to be broken. In their place the Conservatives want to introduce three new, looser, targets:

Javid argued that such a set of rules would mean that debt would end the next parliament lower than it started. This is not quite as tough as it is meant to sound like. It has echoes of the old falling debt rule, but is in fact nothing of the sort – as we will return to.

The proposed current budget rule represents a modest loosening on the previous approach. Consider, for instance, that we were already running a current budget balance last year, yet the new rule would stipulate that this need only be re-achieved in three years’ time. This loosening in part reflects statistical reclassifications (bringing the cost of student loans onto the books) which have increased the deficit relative to the level recorded at the Spring Statement. But it also accounts for both the £13.4 billion day-to-day spending increase set out for next year in September’s Spending Round, and the deterioration we have observed in both the fiscal and economic outlook over recent months.

Taking all of that into account is usually the job of the OBR. But the cancellation of the November Budget means we must instead do this ourselves – as depicted in Figure 1 – in a ready reckoner form. It shows that meeting the proposed current budget rule leaves the Conservatives with just £7 billion of wriggle room in 2022-23 (but building to double that towards the end of the Parliament), which you might speculate is for Conservative commitments to tax cuts to be announced later in this campaign. That is not enough to cover the scale of the tax cuts floated during the Conservative leadership election, totalling tens of billions, but it is significant nonetheless. And it might allow, for example, for the National Insurance threshold to be moved up in line with the higher income tax personal allowance threshold (although only several years after the election). 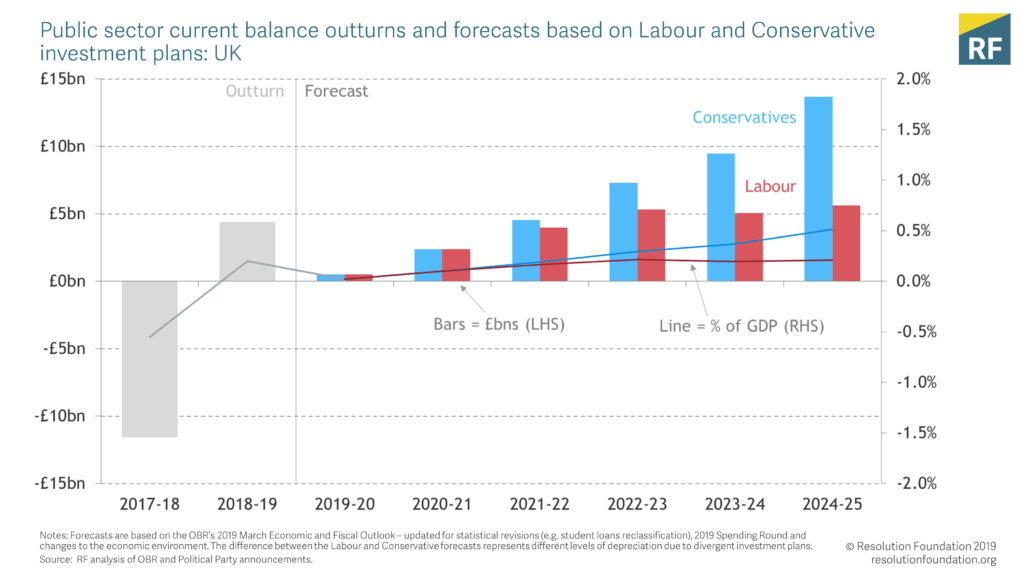 Using up all this headroom would, however, be very unwise, repeating the mistake of previous Chancellors in leaving themselves vulnerable to minor negative forecast changes causing major fiscal rules headaches.

If the proposed rules do not give the Conservatives much room for tax cuts, it’s a different story on investment. Government net investment is currently forecast to be 2.5 per cent of GDP in 2023-24, so the 3 per cent limit would allow an almost 20 per cent (or £15 billion) increase in capital spending by the end of the next parliament.

Figure 2: Both parties rules would increase investment to levels not seen since the 1970s 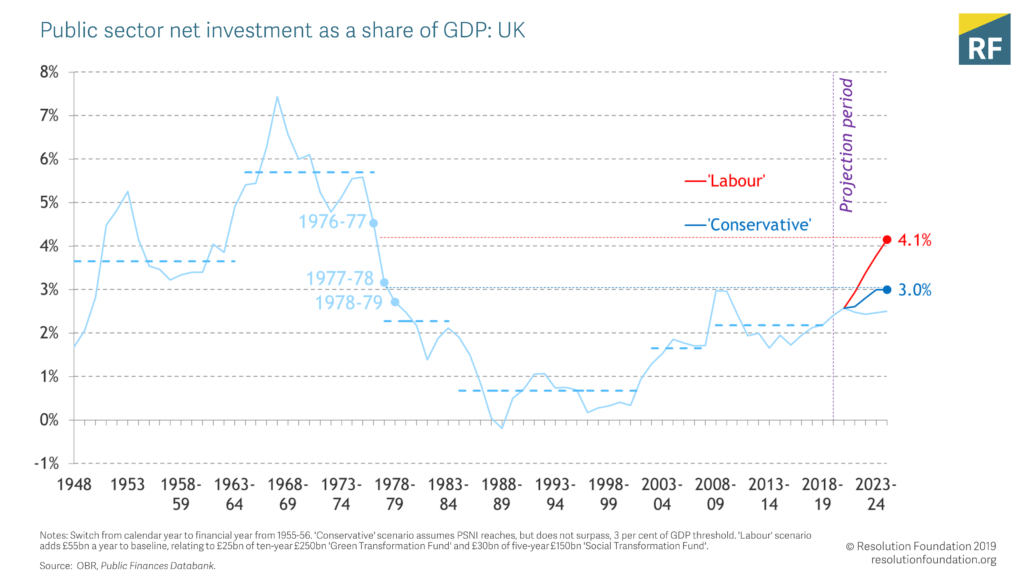 The latter constraint, focusing on the cost of debt not just its level, is sensible, as Figure 3 shows. It is worth noting that there is not much wriggle room against this 6 per cent of tax revenue trigger for reassessing borrowing plans. Higher inflation pushing up the cost of index-linked gilts, alongside weaker than expected tax receipts, could bring a halt to the Chancellor’s plans for an investment splurge.

Figure 3: The Conservatives would not have much headroom versus their cost of borrowing trigger 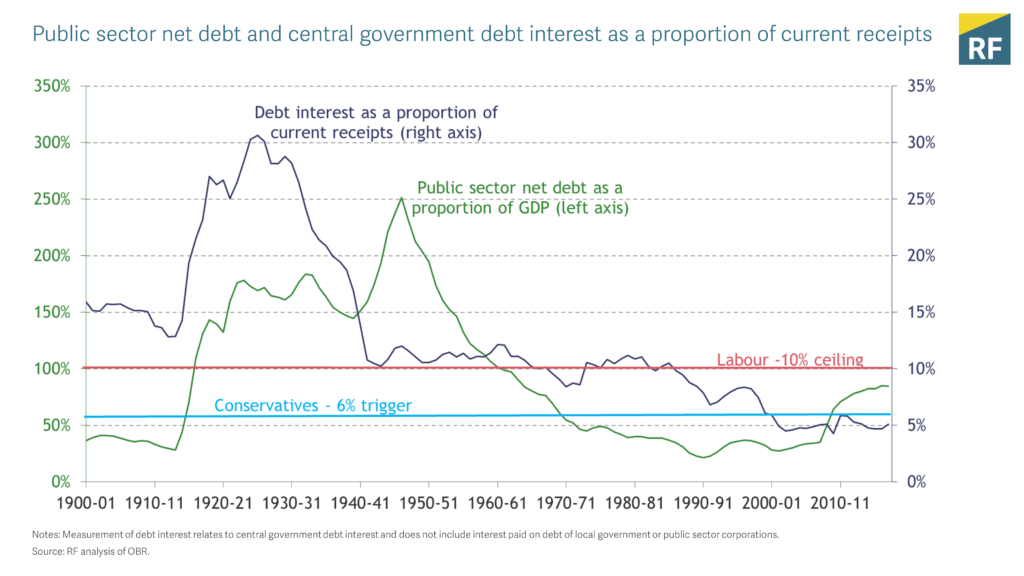 Many Conservatives, and HM Treasury itself, were keen that the overarching objective of public finance management in the years ahead should be debt continuing to fall in each year. They might be superficially pleased by the promise to see lower debt at the end of the parliament than the beginning – but they should not celebrate too hard. The rules set out today would allow for borrowing of around 2.5 per cent of GDP. Given our current muted rate of economic growth, that would leave the debt-to-GDP ratio falling only slowly. And indeed, the main driver of falling debt over the coming years has nothing to do with the government and instead everything to do with the way we account for the Bank of England’s schemes to support the economy – as shown in Figure 4.

Figure 4: The main driver of falling debt is the unwind in the Bank of England’s Term Funding Scheme 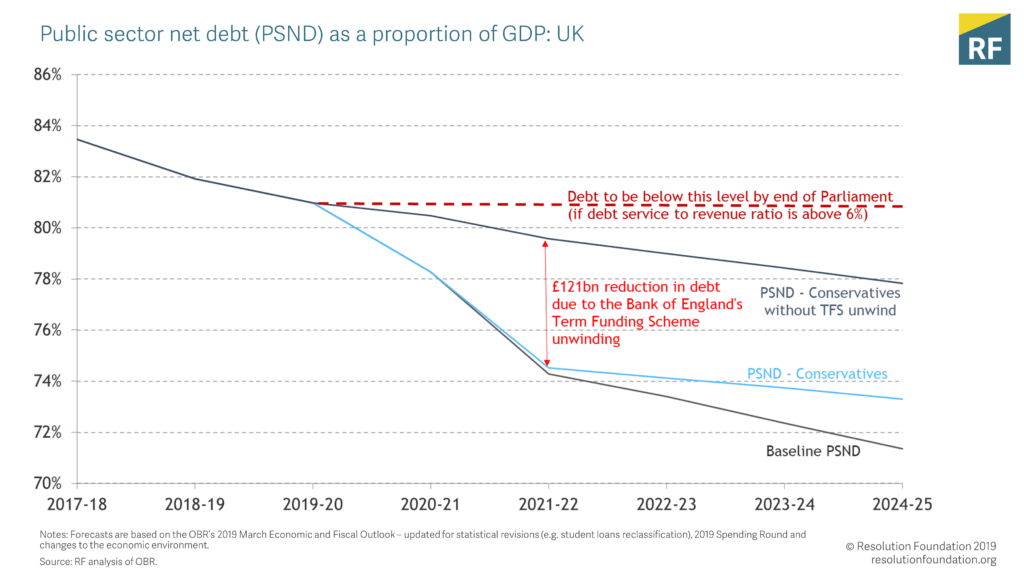 Labour’s new fiscal rules are an even bigger departure from the status quo, but they move in broadly the same direction of travel as the Conservative ones. Once again, they provide scope for greatly increased investment spending, and move away from a narrow focus on debt. They do this with an innovative new approach which focuses on the country’s entire balance sheet (its assets and liabilities) rather than just narrowly on a sub-set of those liabilities (debt). Specifically the proposed rules require:

Here is where there is least difference between the parties on the ultimate fiscal objective. Both are targeting balance, but Labour is only committing to such a position in five years’ time, with that target rolling forward each year. Our view is this is – like the Conservative option – is an unnecessarily loose version of a current balance rule, given that the UK is already close to such balance.

The requirement for net worth to rise by the end of the parliament would provide a backstop to the rolling rule, meaning it cannot be put back indefinitely. However, this is only a partial defence, because the net worth rule is far less constraining on current spending than the current balance rule, all things equal. Indeed, Labour has less headroom versus its current budget balance target because all the extra investment it has planned brings with it a bigger depreciation bill.

The much bigger difference between the parties in this area is that, while both are aiming for a current budget balance, Labour is planning to fund a significantly larger amount of current spending by raising a correspondingly larger amount in taxation: that is, a bigger state. The new manifesto is a week away, but it’s worth reflecting on the scale of the 2017 promise by way of context. Back then, Labour promised just short of £50 billion of extra tax and current spend. As always, similar fiscal rules can (and should) leave lots of scope for very different policy choices.

By targeting improving public sector net worth, they are looking to ensure the state’s assets grow faster than its liabilities. On the investment side, that means ensuring things that are invested in are as valuable as the borrowing required to make them happen. This approach is clearly more appropriate for taking rational decisions about nationalisations, for example, and is a good thing in that it ensures investments happen if they increase public value (and shouldn’t if they do not).

But it brings with it two important challenges for people like us advocating such a focus on net worth. First, it requires much more focus on ensuring the provision of accurate and updated asset valuations. And second, it complicates HM Treasury’s job of operating day-to-day capital spending control. The first challenge should be eased by giving a stronger role for the Office for Budget Responsibility and National Audit Office in auditing and monitoring asset values. And it is possibly in part to address the second challenge that Labour has set out cash figures for how much investment it intends to spend: £250 billion extra over ten years in a ‘green transformation fund’ and £150 billion over five years in a ‘social transformation fund’. But the huge scale of those plans (which basically doubling current investment levels) means the challenge remains large.

Both parties have proposed new fiscal rules today. That is a good thing, because Britain is currently operating without any fiscal framework and history teaches us that doing so can be very costly in terms of the deficit bias inherent in democratic politics.

But the next generation of rules needs to be fit for the challenges and opportunities facing 21st century Britain. The rules proposed by both the two parties include some welcome innovations which we have explored in our recent reports, but both leave things to be desired as well.

Both parties have rightly opted for rules which require tax revenues to cover day-to-day spending – albeit not doing so until a few years into the future. This reflects the usual political deficit bias, but is hard to argue for – especially as we’re almost certainly nearer the next recession than the last. On that note, neither fiscal framework does enough to build in current budget headroom that ensures fiscal policy can sustainably do more to support the economy in downturns in the years ahead. Nor does either provide sufficient headroom to allow for typical levels of forecasting errors recorded over the last decade.

Both parties have also chosen rules that allow the government to take advantage of historically low interest rates to borrow for investment. These new approaches are welcome, given the need for such spending on priorities from housing to tackling climate change. On controlling the levels of that spending, both parties have moved away from the too-narrow focus on debt, to a welcome limit on the actual costs of that debt. But big differences remain: with the Conservatives focusing on a firm limit on investment spending, while Labour has chosen an approach that focuses on ensuring the value of investments exceeds their cost. The former could risk missing out on some valuable investments, while the latter risks being too unconstrained unless accompanied by a rigorous approach to asset valuations. As ever, much of the devil will be in the operational detail.

In how either of these fiscal frameworks are operated, it is important to learn from the tendency to run fiscal policy too close to the wire, which has limited the shelf life of past fiscal frameworks. Building flexibility into the rules – in the form of target ranges for the current balance and time-limited escape clauses – is crucial to allowing fiscal policy to play an active role in stabilising the economy without undermining the rules themselves.

Fiscal rules are technical frameworks only ever focused on by a tiny fraction of the population. But they are important for government’s running of our public finances, and for having a sense of where we are heading as a country. On the basis of today’s flurry of new fiscal ideas, the country has turned the corner away from a shrinking state, and is heading for a bigger one.

While that includes some loosening on the current budget, the country is mainly heading for much higher investment spending – and higher borrowing as a result. This is necessary, but not sufficient – we also need a much more serious debate about ensuring it’s spent on the right priorities and in the right ways. That is the task whoever wins the coming election.