April’s Public Sector Finances data capture the first full month of the coronavirus lockdown and provide a sobering reminder of the fiscal costs of the pandemic. Public sector net borrowing was £62.1 billion last month, the highest level ever recorded and nearly three time higher than the last record of £22 billion in April 2012. Fiscal pressures came from both sides of the government ledger with receipts down 24 per cent and expenditure up 57 per cent on last April.

While these figures are daunting, its important to draw the right lessons from them.  First, pandemics are expensive both due to the drop in taxable economic activity and the cost of helping households and firms through the temporary shock. Second, this is only the beginning of what will be an eye-watering series of monthly borrowing figures the likes of which we haven’t seen outside of wartime. Third, while borrowing is high, there is no sign that the government is struggling to finance itself with strong demand for its debt and the UK’s first gilt issuance at a negative yield on Wednesday. Fourth, debt might be going up, but the costs of debt are coming down which is keeping the debt interest/revenue ratio (a better measure of the burden on the public finances) close to historic lows. Fifth, fiscal policy has a further job in driving a strong post-lockdown recovery, which should be secured before discussion moves to the question of consolidation.

Some lessons are blindingly obvious, and today’s comes from Public Sector Finance data confirming that the immediate fiscal costs of the coronavirus outbreak and government’s policy response are huge.[1] In fact last month saw the highest borrowing in UK government history of £62.1 billion which is nearly three times higher than in any previous month – the last record being £22 billion in April of 2012 (Figure 1).  The fiscal costs of the first full month of lockdown were split between a £17 billion (24 per cent) fall in receipts relative to last April and a £36.5bn (57 per cent) rise in spending compared to the same month last year. 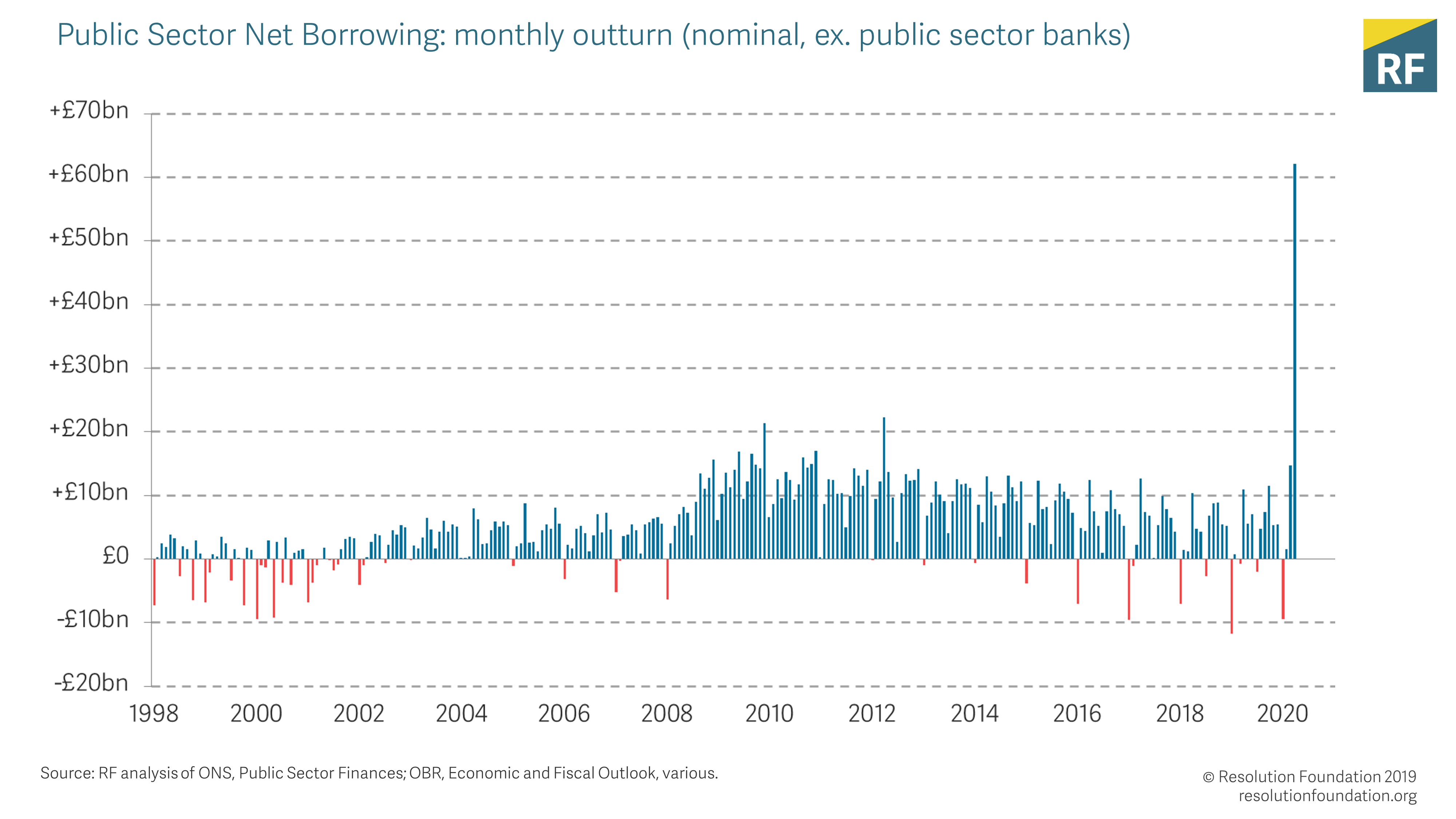 On the tax side the fall in revenue was broad based with particularly dramatic falls in VAT (40 per cent), PAYE (40 per cent) and NICs (37 per cent), reflecting the contraction in both incomes and consumption as a result of the lockdown (Figure 2).[2]

Figure 2: Receipts fell by 24 per cent compared with last April 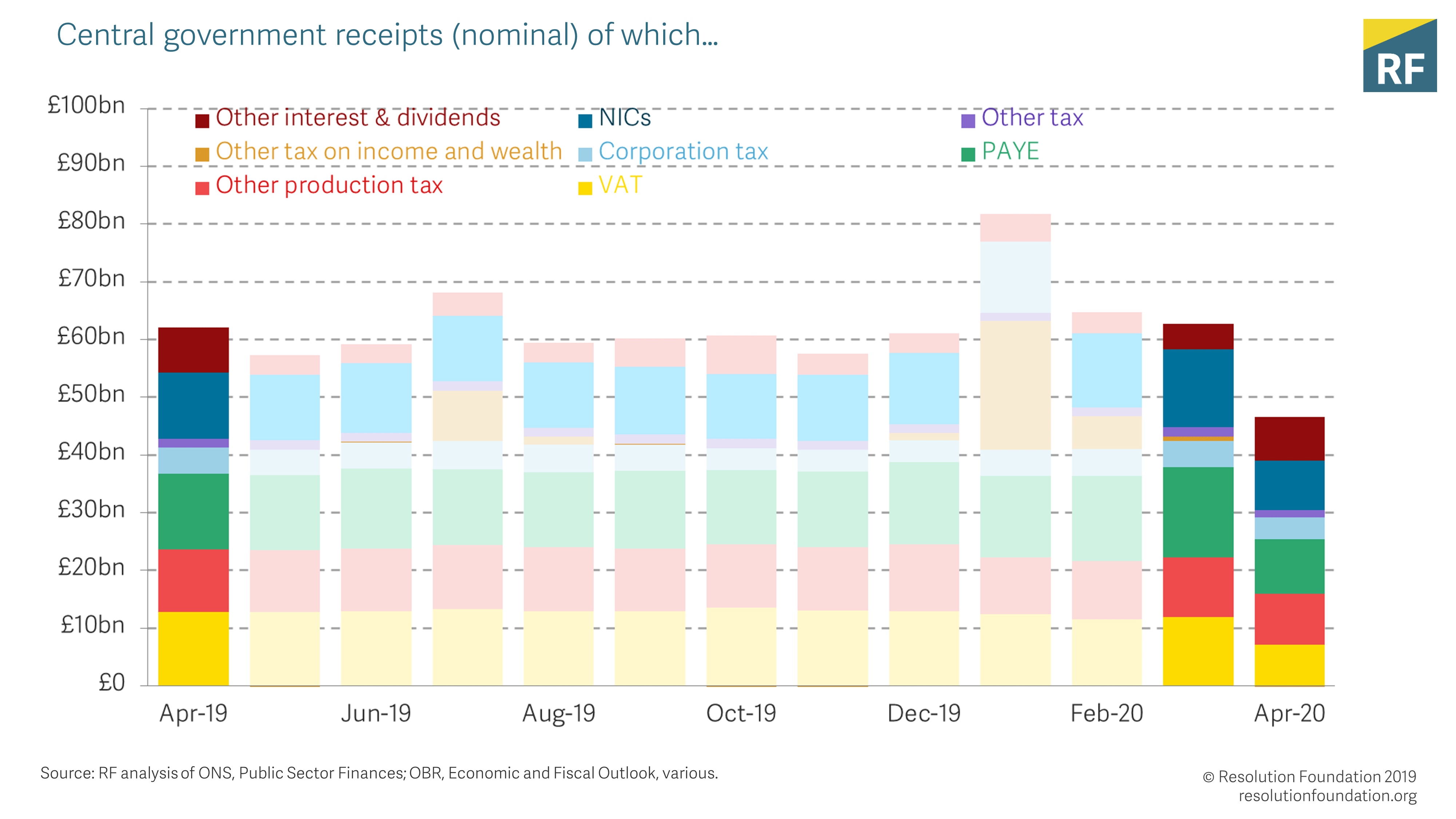 As taxes are falling, spending is surging. Big increases in transfers to local government (doubling) and other current expenditure (94 per cent) partly captures the ramping up of support to local authorities, the NHS, and workers and firms through the Job Retention Scheme and business grants (Figure 3).

Figure 3: Spending rose by 57 per cent compared with last April 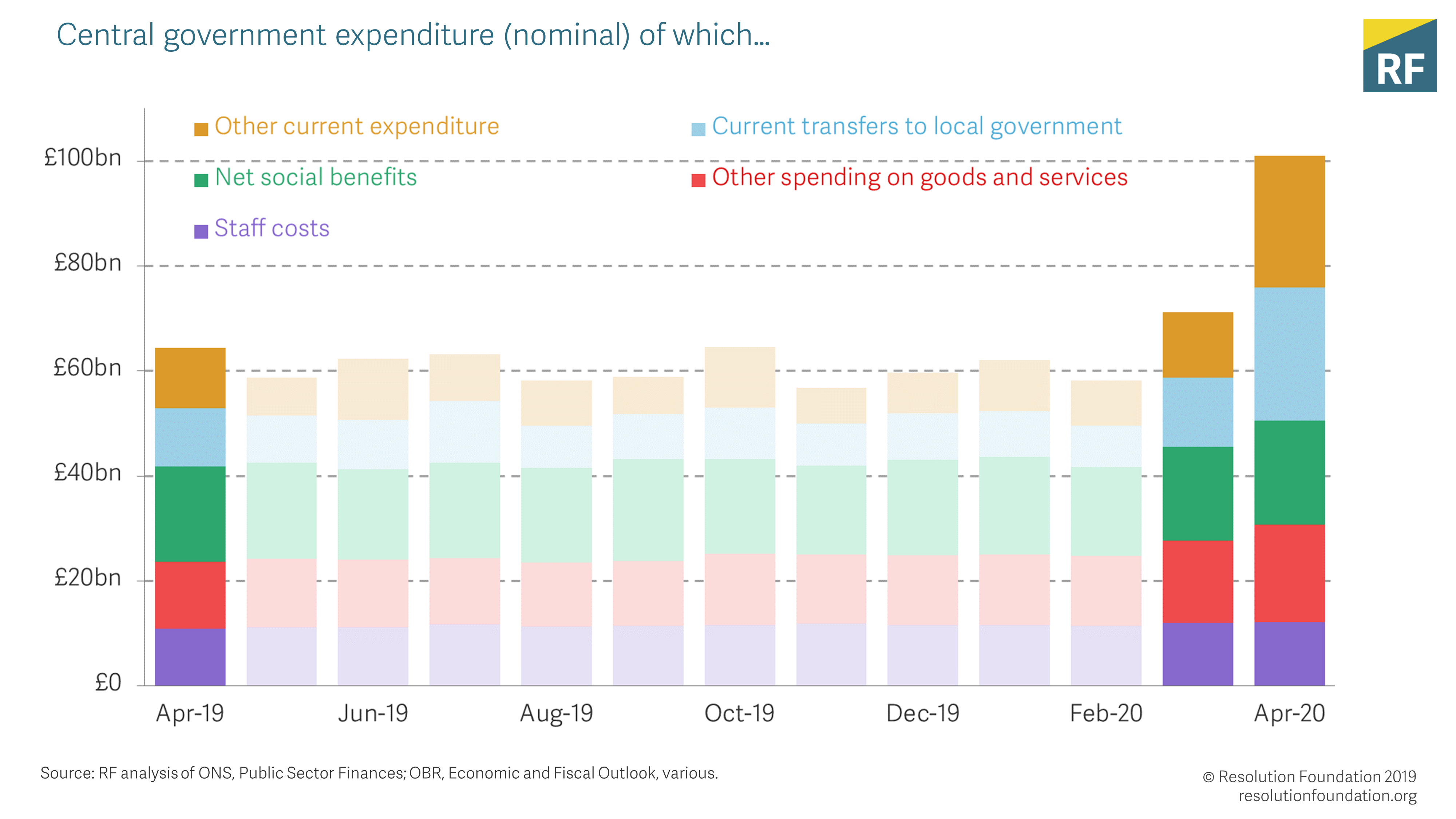 2. This is only the first monthly bill

This extra borrowing is essential to shielding households and firms from the shock that is currently passing through the economy. And the scale of this shock means this month’s figures are just the tip of the iceberg – the long-run fiscal impact of coronavirus will depend on the length of social distancing, the pace of the recovery, and the degree of scarring it leaves behind on firms and individuals. The April borrowing figure is broadly in line with the OBR’s 3-month lockdown scenario published last month (Figure 4) which sees borrowing reach £298 billion (14 per cent of GDP) this financial year.[3] However, there remains considerable uncertainty about how long social distancing measures of some sort will need to be in place – with much depending on whether and when a reliable testing and tracing or a proven vaccine can be rolled out.

Figure 4: April’s borrowing is consistent with the OBR’s coronavirus scenario 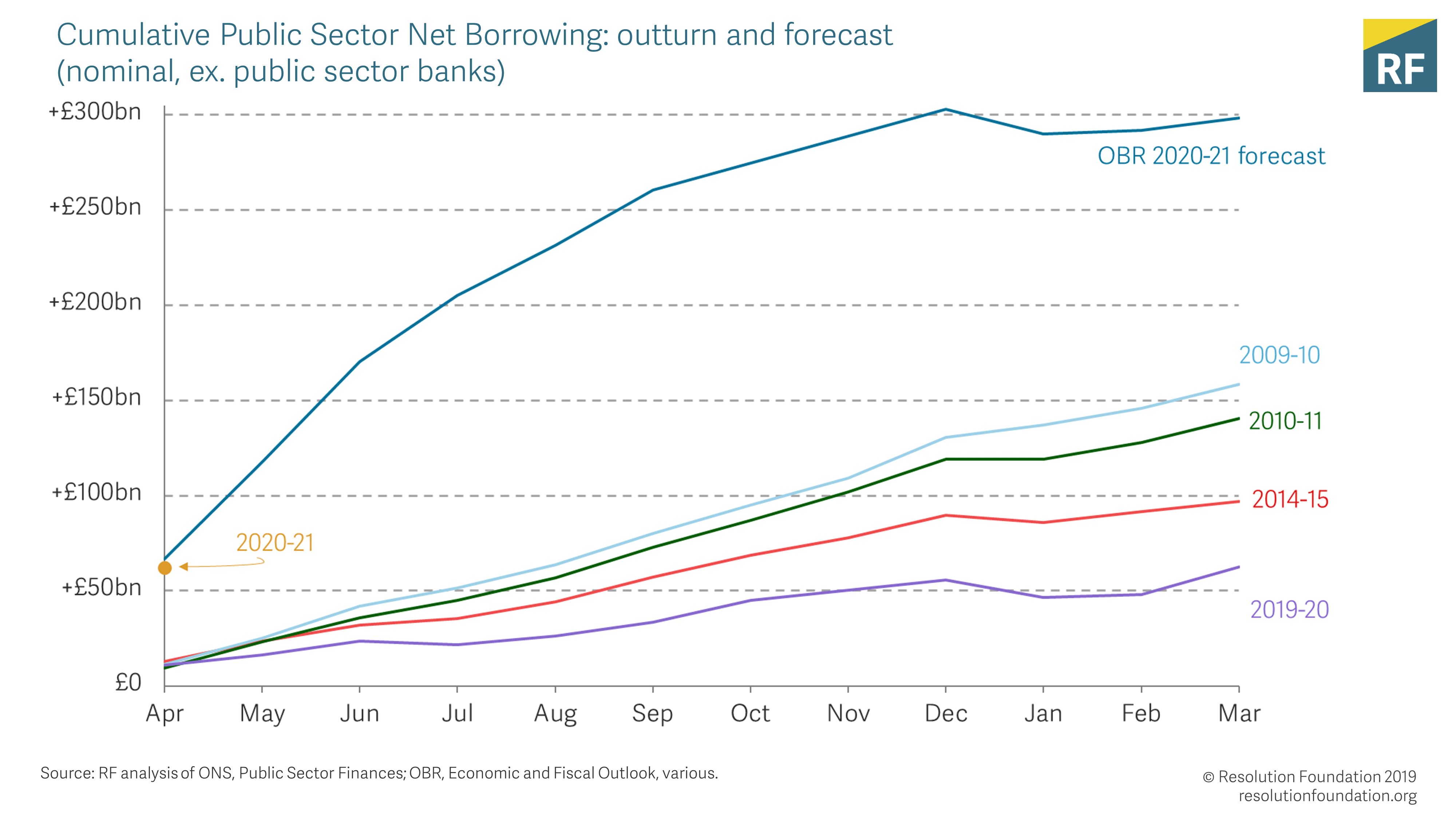 Our own Resolution Foundation modelling suggests that if social distancing measures need to be in place for a period of six months, then borrowing could reach £400bn (22 per cent of GDP) this year and debt peak at 129 per cent of GDP – with additional costs split between lower economic activity and the cost of extending the government’s support to firms and households for to six months (Figure 5).[4]

Figure 5: Government measures push up borrowing significantly over a year 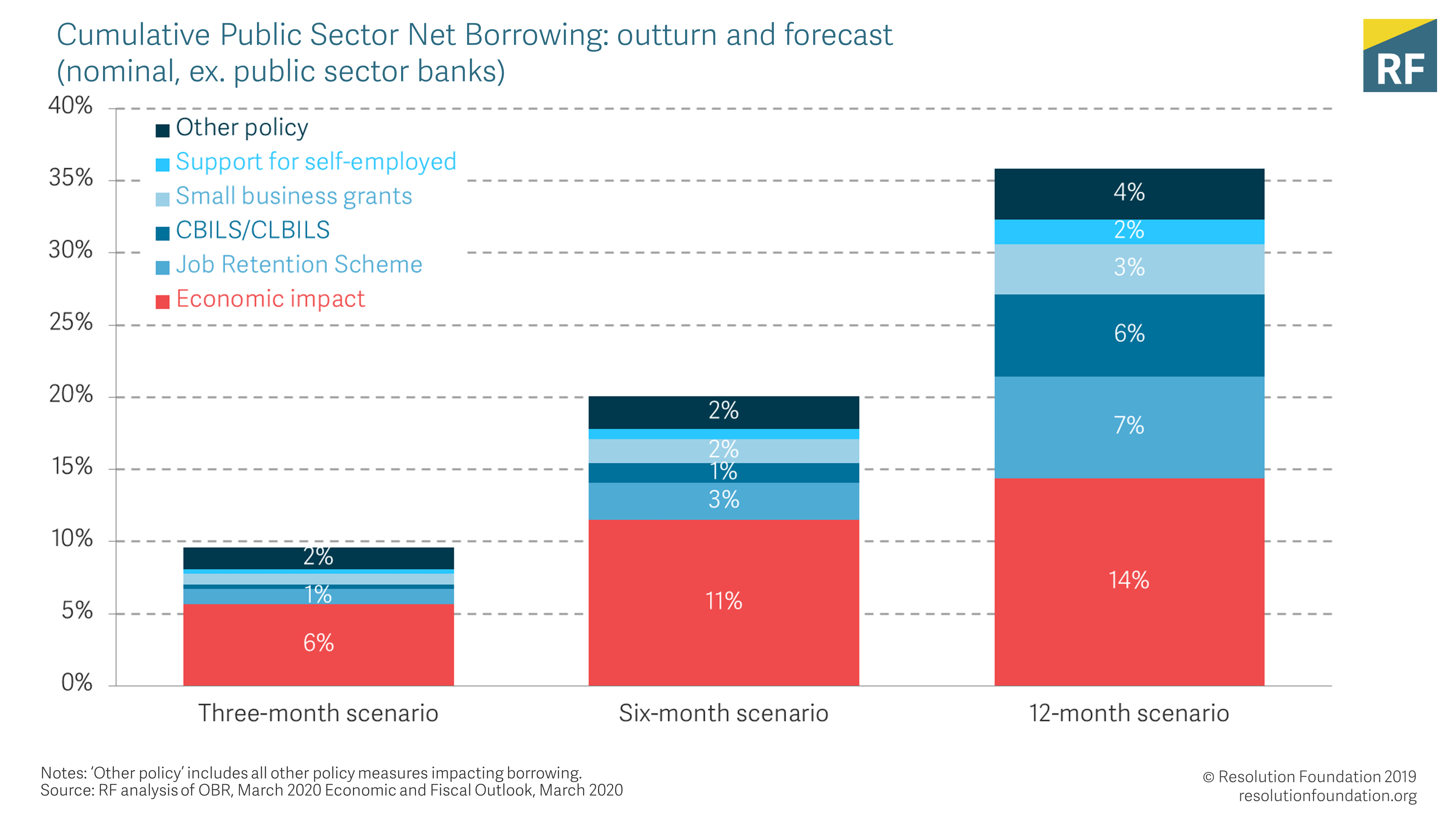 3. Borrowing is high, but there is no sign of the government struggling to fund itself

However, even these large fiscal costs associated with a longer lockdown look to be manageable, both in the near and longer-term. Indeed, the same economic costs and risks that require increased government borrowing also increase demand for government bonds.

After an initial spike in yields and evidence of gilt market illiquidity, the Bank of England’s resumption of government bond purchases and expansion of the Ways and Means Facility has seen healthy levels of demand for the record volume of gilts issued since the lockdown. The Debt Management Office has successfully raised over £89 billion from gilt auctions since mid-March which have seen cover ratios (the ratio of the volume of bids received to the volume of debt being auction) of 2 or more and yield tails (a measure of the spread of prices bid) remaining low. While we praise HMRC and DWP staff for delivering vital support to households via the JRS and Universal Credit respectively, we shouldn’t fail to recognise the crucial roles of the unsung public servants in the Treasury, Debt Management Office, and Bank of England in ensuring that this huge fiscal policy response can actually be financed.

4. Debt might be going up but the costs of that debt are still coming down

Not only has the government not struggled to finance itself in the near-term, but falling gilt yields mean that the total costs of our debt may stilll be on a downward path even with the much higher debt levels that a protracted period of social distancing would bring.  Even under a 12-month lockdown, the debt interest-to-revenue ratio (a measure of the financial burden that debt imposes on the public finances) remains close to historic lows and below the government 6 per cent threshold value (Figure 6).  And on Wednesday, the government issued its first bond at a negative yield of minus 0.003 per cent for 3-year gilt. So long as interest rates remain low, the government has significant fiscal space to support the post-lockdown recovery. 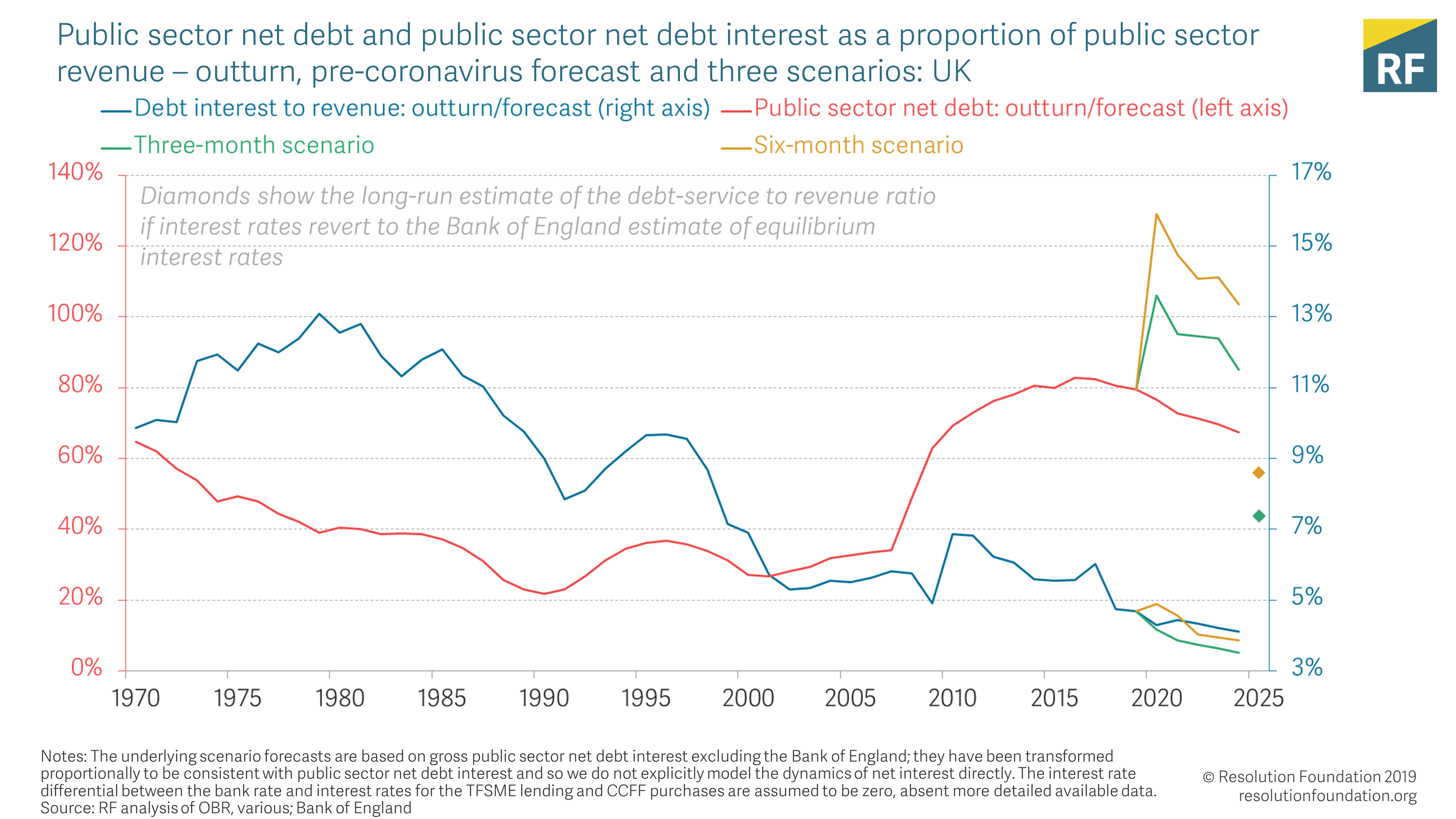 Fiscal policy’s job is not only to ensure we avoid this immediate downturn being any deeper than it needs to be but also to ensure a strong recovery to bring unemployment back down and prevent long-term scarring of the workforce. The Treasury’s tasks need to be done in the right order because delivering a successful rescue and strong recovery will then make the subsequent fiscal consolidation easier and quicker.

In the here and now the government has the fiscal space to protect workers and firms from the worst of the economic disruption of the lockdown – saving livelihoods so we can ask people to help us save lives. Next will come the task of supporting the economic recovery as social distancing restrictions are lifted. That will include the gradual, but only gradual, winding down of the Job Retention Scheme to allow firms to reabsorb their workforce as demand recovers.[5] And as that policy steps back other policies will need to step forward. Active labour market policies, including job guarantees for the young, will be needed to support the unemployment back into work, a task that will grow as the JRS is phased out. This will include helping workers in sectors where activity may be impaired for a prolonged period (like tourism, hospitality, and retail) move into sectors where activity is recovering. The government could also do more to make its business interruption loans less of a burden on, and more of an enabler of, economic recovery. This could be done by allowing firms to write-off investments in the workplace adaptations needed to enable them to safely resume operation and by capping loan repayments at a certain proportion of firm turnover.

Broader based stimulus is also likely to be needed to ensure we see a strong recovery. Whereas in the past it has been the role of monetary policy to deliver such stimulus in the aftermath of recessions, low interest rates mean that the Bank of England has little policy space to support the economy this time round even if the current re-examination of the case for negative rates ends with them slipping slightly below zero. Instead we will need to continue to rely on fiscal policy for the bulk of support, with the Bank playing a supporting role by keeping financing conditions stable. Such an approach will be facilitated by a clear interim fiscal framework that set out how the Government plans to restore the public finances to a sustainable position once the recovery is secured.

While this will entail additional, temporary, fiscal costs, the long-run damage of widespread unemployment and firm closures would be greater. Returning to the chronic 10 per cent average structural unemployment rate seen throughout the decade of 1980s could entail a cost to the public finances of around £175 billion in lost taxes and higher benefit spending over the next 5 years. This is even before taking account of the second-round effects of lower levels of consumption by those out of work and on benefits. In contrast, and by way of illustrating the danger of only focusing on the costs of government schemes, it is worth noting that extending the JRS in its current form for a whole year (not something that we recommend) would cost around £122 billion net of taxes and before taking account of the additional consumption and output it would support over this period.

Once that recovery is secure, and only then, policy makers’ focus can turn to the consolidation that is likely to be necessary. The scale of that consolidation is very uncertain, ultimately resting on the level of permanent damage done to our economy by this crisis – again reiterating the need to get policy right in the here and now to prevent that damage being done. As Figure 7 shows, our illustrative scenarios point to a current budget deficit of between 1 to 2 per cent of GDP in the medium term, including the spending increases the government pencilled in at the March Budget. While there will be big political and economic debates to come about the desirable path of much elevated government debt, both main parties in the UK agree on the need for day to day expenditure to be covered by taxation in normal times. As a result, the size of the current budget deficit provides a guide to the consolidation that may be the backdrop to the next general election due in 2024.

Figure 7: A 1 – 2 per cent current budget deficit is reached in 3 and 6-month scenarios 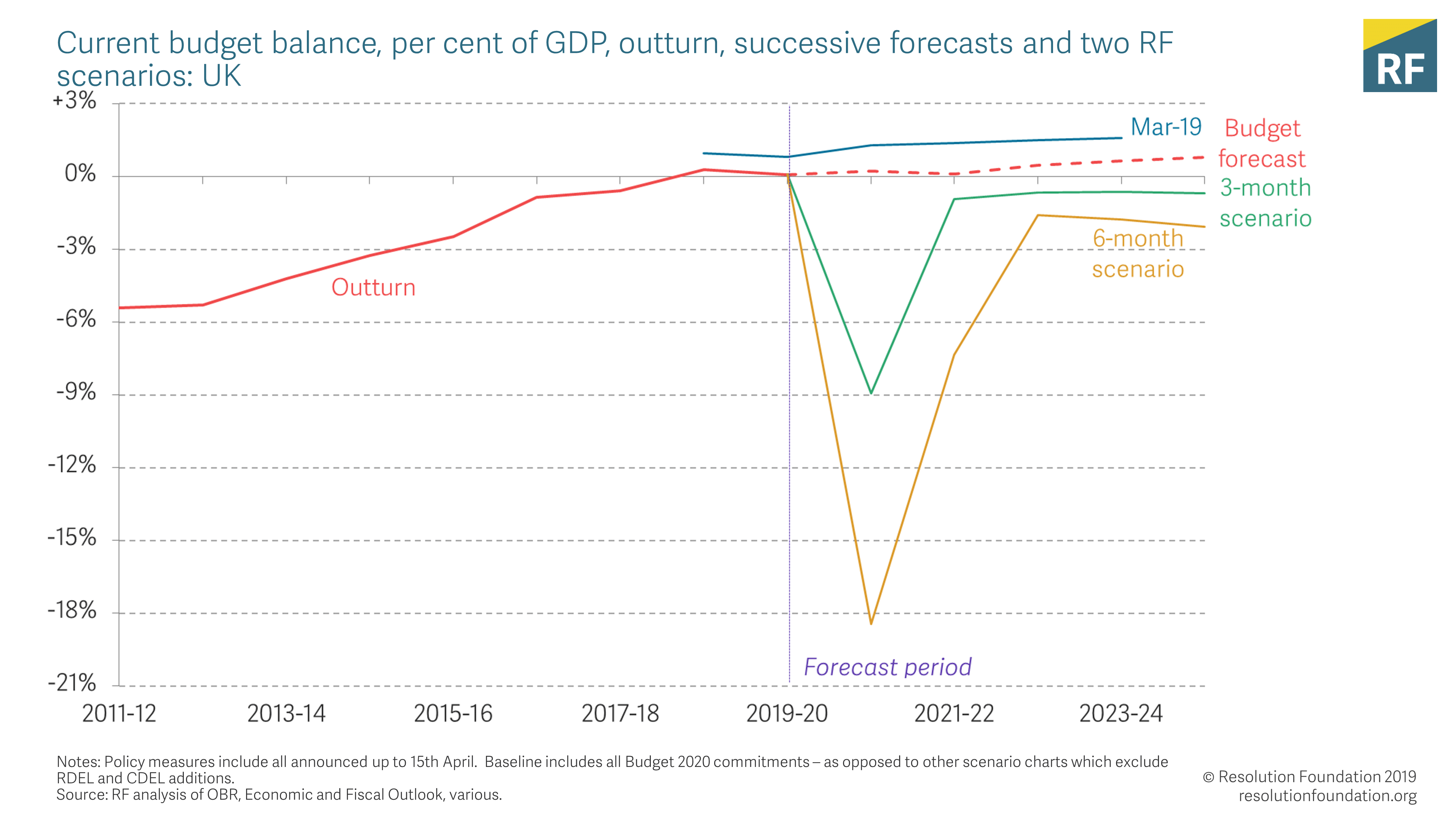 So fiscal policymakers face a number of crucial challenges in the face of a pandemic and the economic shock that has followed it, and their work is far from over. The record borrowing we see today is part of addressing those challenges and it should be recognised as such, rather than leading to calls to reduce spending on coronavirus support measures. Such a move would not just be premature, it would be reckless.

Next steps in the economic response to coronavirus, Resolution Foundation, April 2020.

The next phase of the Coronavirus Job Retention Scheme, Resolution Foundation, May 2020.