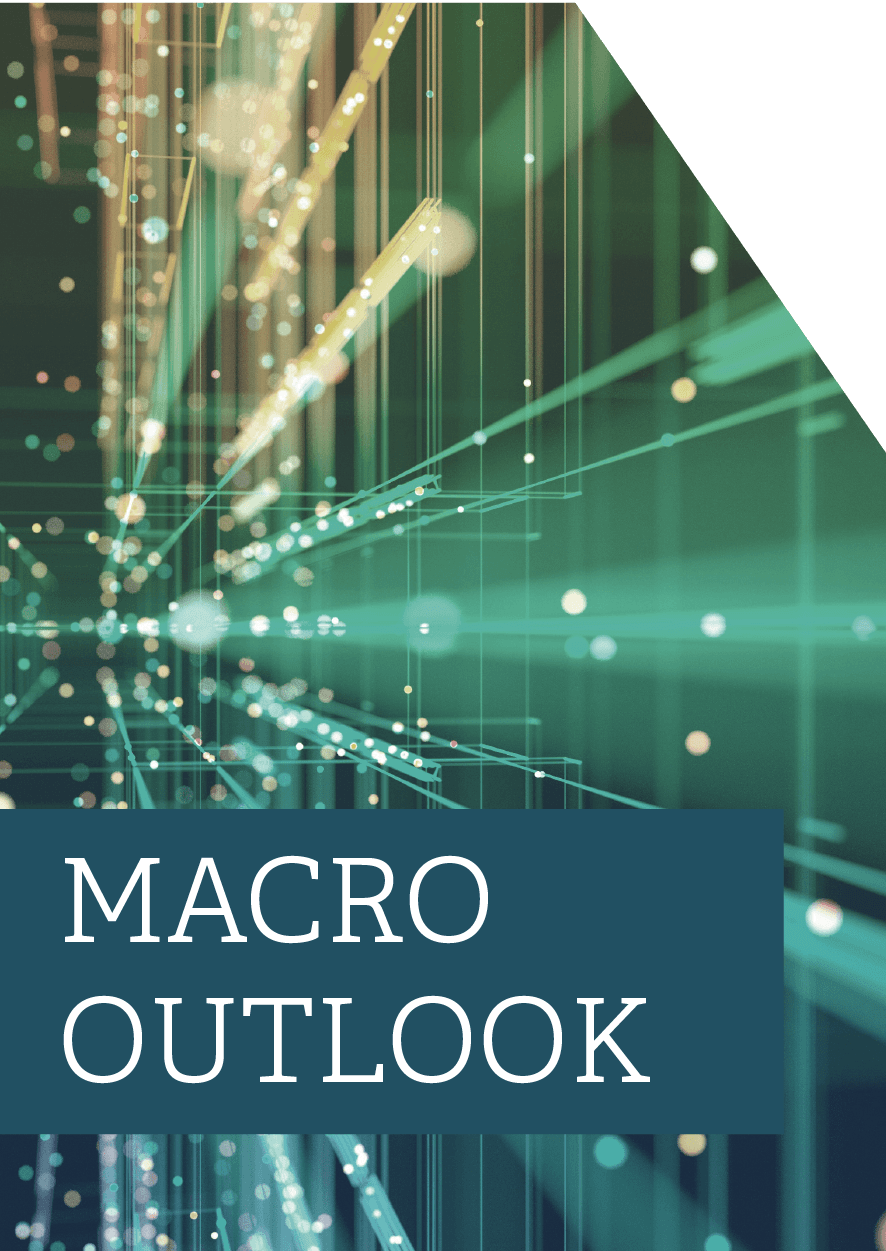 This is the first of a new series of Macro Policy Outlooks (MPOs) from the Resolution Foundation’s Macroeconomic Policy Unit, providing a policy-focused take on the economy. In this edition we explore the outlook ahead of the Budget due on 11 March.

The economy has slowed significantly in recent quarters, with 2019 the second-weakest post-war year outside of a recession. While much attention has been heaped upon the link between Brexit uncertainty and weak investment, it is striking that households have become more cautious of late, with consumption accounting for nearly all of the weakening since 2017. On the supply side, there has been more bad news on productivity with total factor productivity – a measure of the economy’s efficiency – making the largest contribution to the slowdown in growth. This underperformance has been particularly striking in an international context as the UK has had the worst total factor productivity growth across the G7 economies. So improved household sentiment and higher productivity are necessary for a sustained increase in growth.

There are some recent or forthcoming reasons for optimism: following the election, uncertainty appears to have receded and sentiment improved, while we are expecting a significant increase in capital spending in the Budget. That would lead fiscal policy to make its first sustained, positive contribution to growth in a decade (boosting GDP by 1 per cent at end-2021). That is particularly welcome given likely downgrades to the Office for Budget Responsibility’s (OBR’s) economic forecasts, that may well result in the forecast size of our economy by the end of 2022 reduced by around half a per cent.

Consumption has played a key role in recent weak growth

The economy weakened significantly last year, with four-quarter GDP growth falling back from 2 per cent in Q1 to just 1.1 per cent in Q4. This means 2019 had the slowest growth in GDP of any calendar year since the 1960s. Growth of GDP per capita – a key measure of changes in living standards – has also slowed by almost 1 percentage point (or nearly two-thirds, from 1.4 per cent to 0.5 per cent). Much of the commentary around this slowing has focused on the impact of Brexit uncertainty and its implications for business investment (shown in the first chart below). But while business investment has been historically weak in recent quarters, the second chart below shows that since the most recent peak in the growth rate (at the start of 2017 when growth was 2.2 per cent), 60 per cent of the slowdown has been accounted for by consumption. This should not be a surprise as consumption makes up nearly two-thirds of final demand, but it makes clear that the growth outlook hinges on future consumption growth. 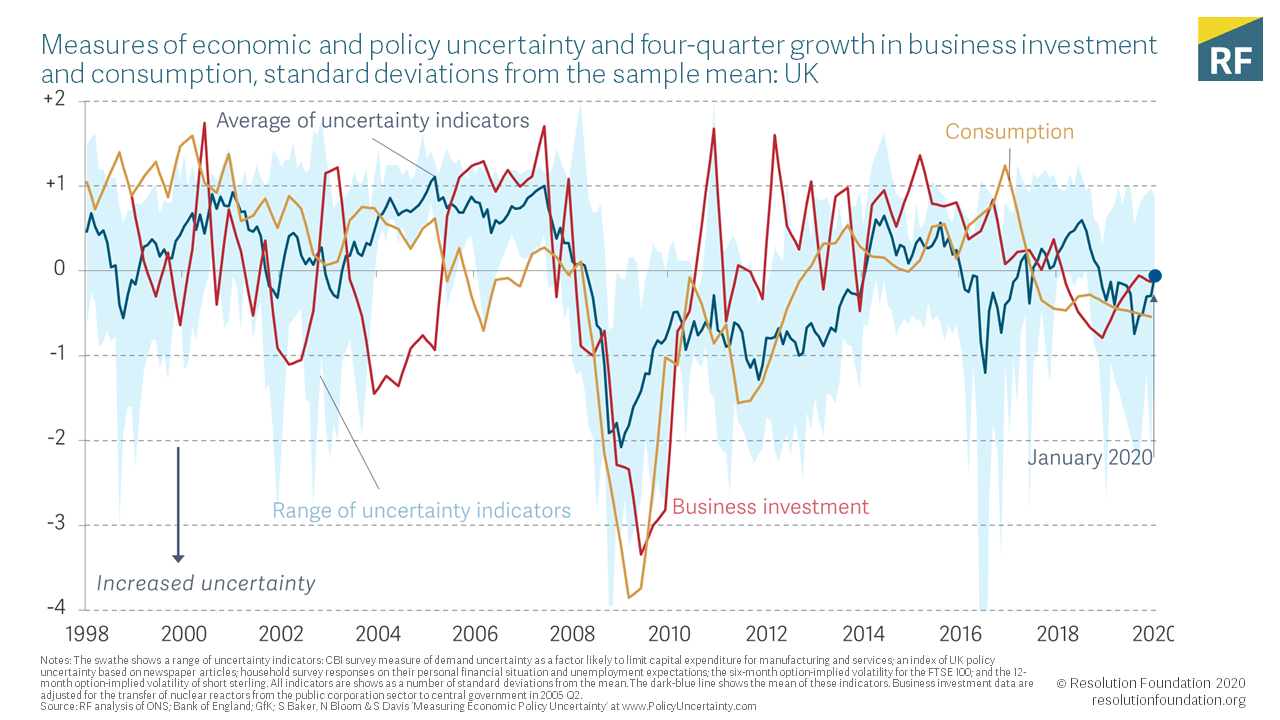 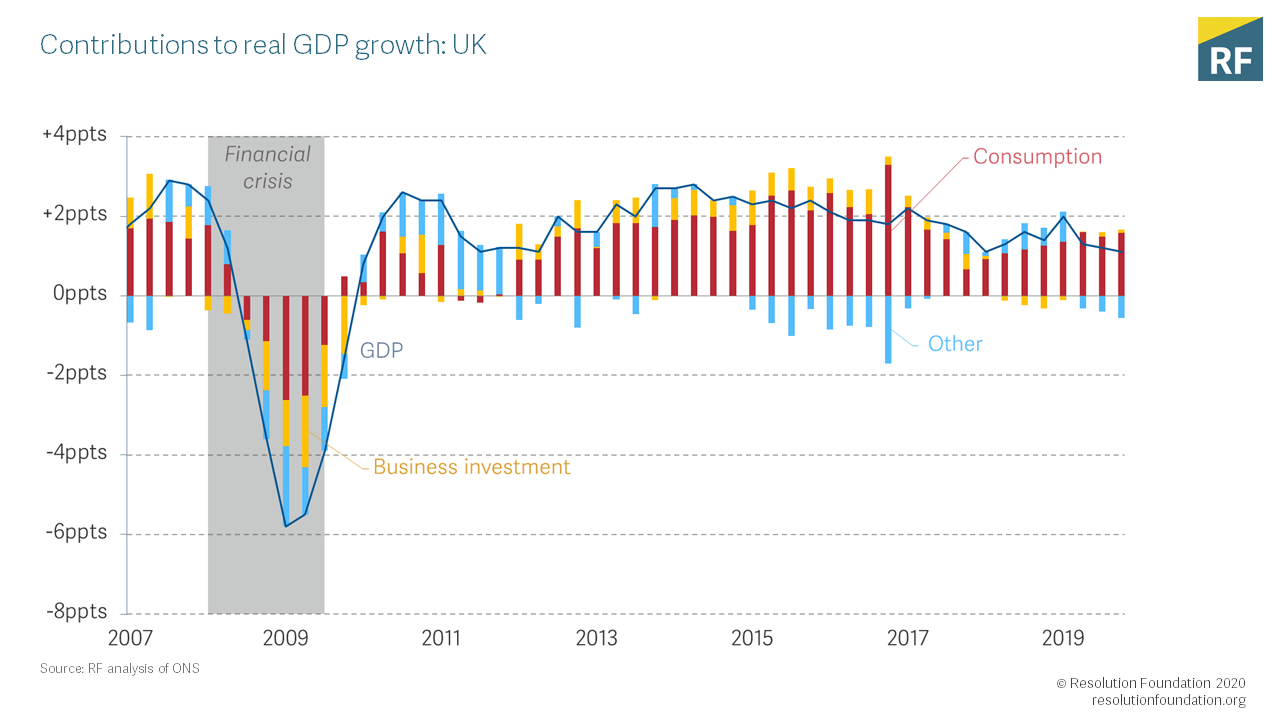 On the supply side, slower growth is not just an investment story either. Weak spending on durable capital goods is important for supply because they are used in the production process for years to come. That said, as shown in the chart below, post-crisis weakness on the supply side is dominated by weak total factor productivity (TFP) growth – a measure of the economy’s efficiency which accounts for inputs to the production process. 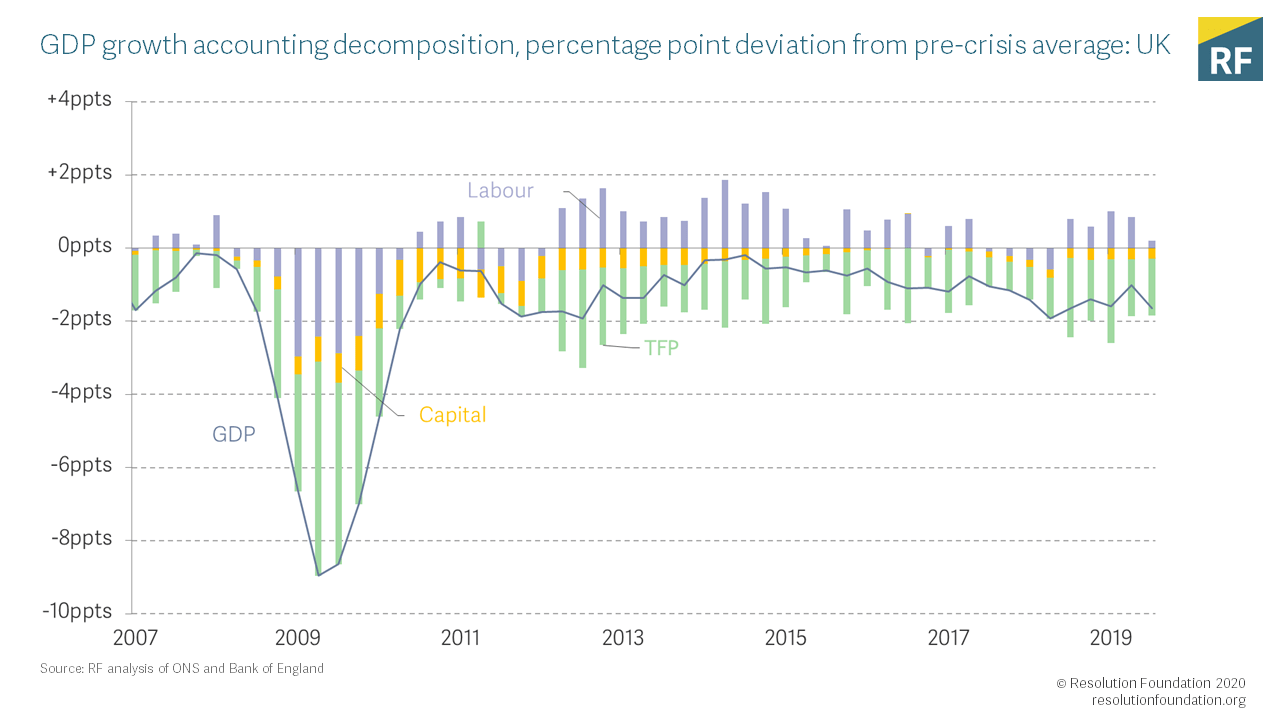 TFP has made the largest contribution to the slowing in supply growth since 2017 (although weak capital growth has also contributed). By historical standards, it has been extremely weak: Bank of England data show 2017 was the weakest year in over a century for TFP growth. And comparable cross-country data suggest that, since 2007, TFP growth has deteriorated more in the UK than any other G7 country (see chart below). 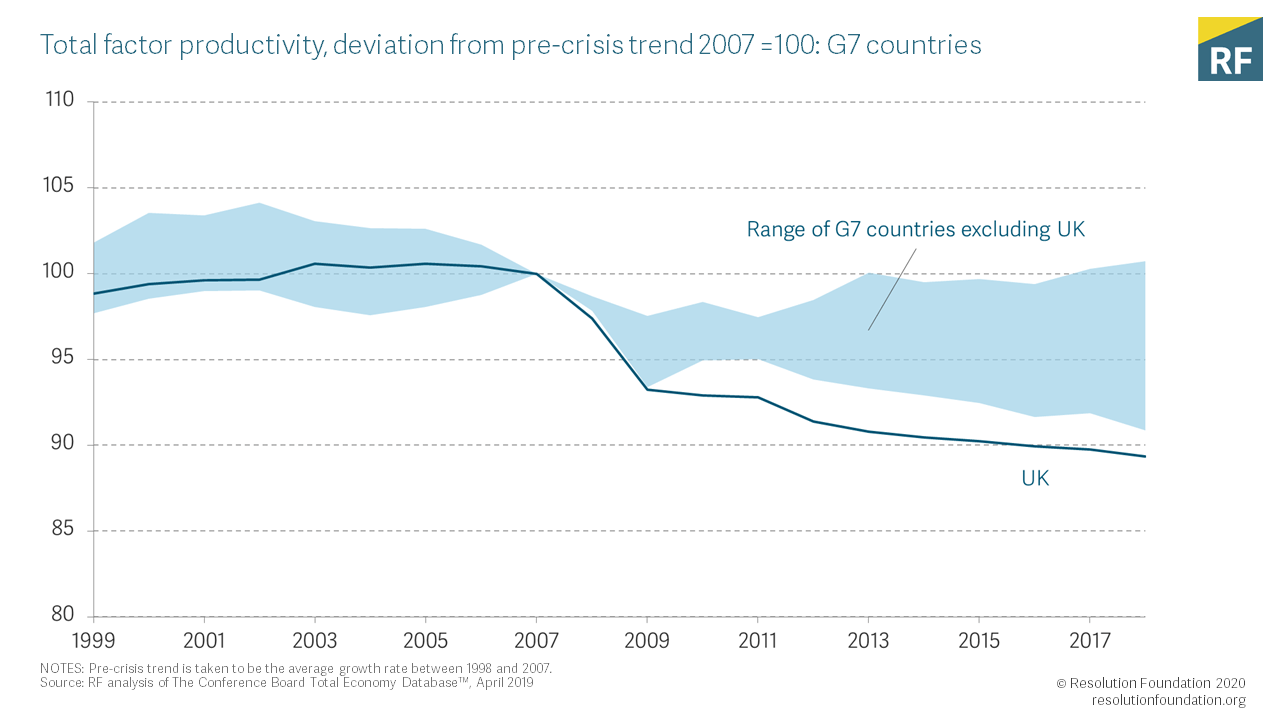 Weak consumption growth is particularly noticeable against the backdrop of relatively strong pay growth, with average weekly earnings growth rising to around 4 per cent during last year, reminding us of the benefits of a tight labour market. Indeed, as shown in the chart below, almost all measures of labour market slack are now below where they were prior to the financial crisis. But more rapid pay growth in the first half of last year was not matched by productivity growth, meaning that firms’ costs were rising. Since then, pay growth has slowed somewhat, underscoring the role of productivity growth in supporting sustained pay increases. And because periods of relatively strong demand growth tend to be associated with faster improvements in productivity, a virtuous cycle of improved consumer confidence and productivity growth would provide the conditions for a sustained improvement in the economic outlook. So a key question becomes: how likely are we to see such an improvement in sentiment, and what role will macroeconomic policy play in supporting that? 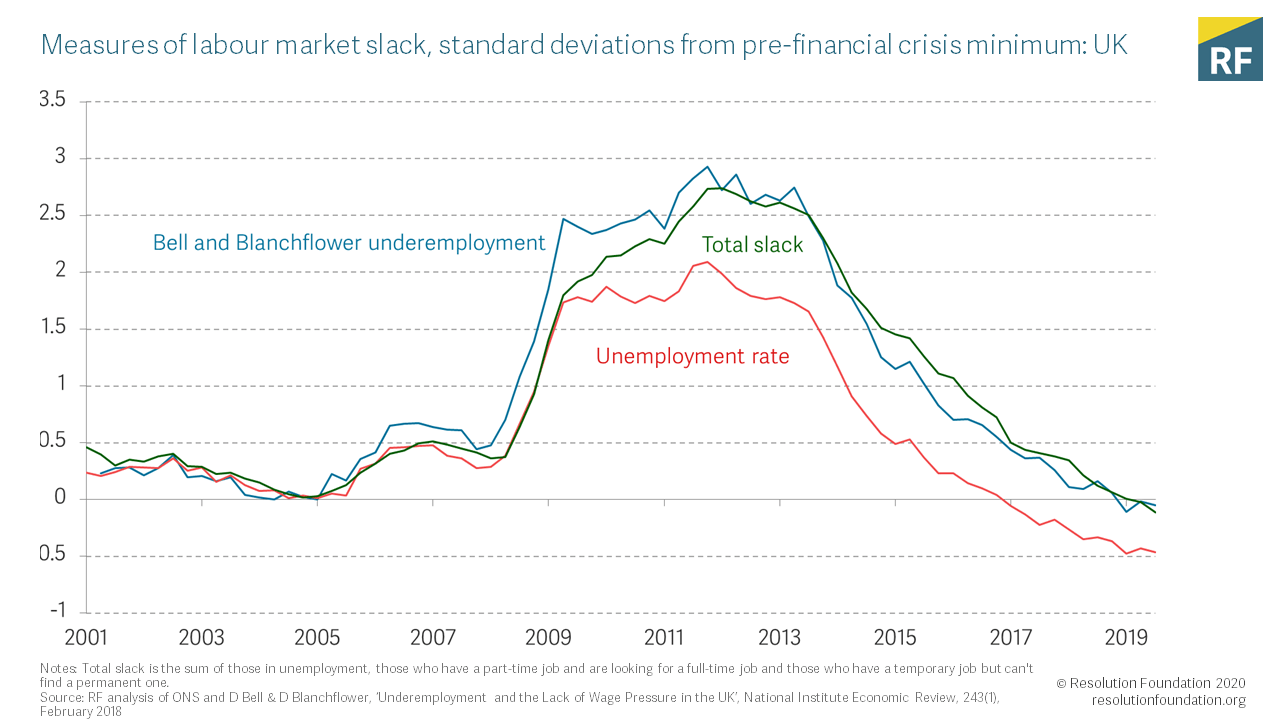 Such an improvement in household sentiment looks more likely than it did back in December. This is because the headwinds from uncertainty have reduced somewhat following the election (as evidenced by the post-election fall in our measure of uncertainty – shown by the uptick to the blue dot in the first chart on this page). Moreover, after deteriorating through most of last year, near-term survey data have improved sharply at the start of 2020. Indeed, the chart below shows that the PMI – the most reliable such indicator for the UK outlook – registered its largest rise in over six years in January. If current levels are maintained, that points to growth of 0.4 per cent in Q1. That would be stronger than the Bank of England’s January forecast. But such indicators have been misleading in the past in the immediate aftermath of political events, most obviously in the aftermath of the 2016 referendum when the PMI suggested a very sharp slowdown in growth. 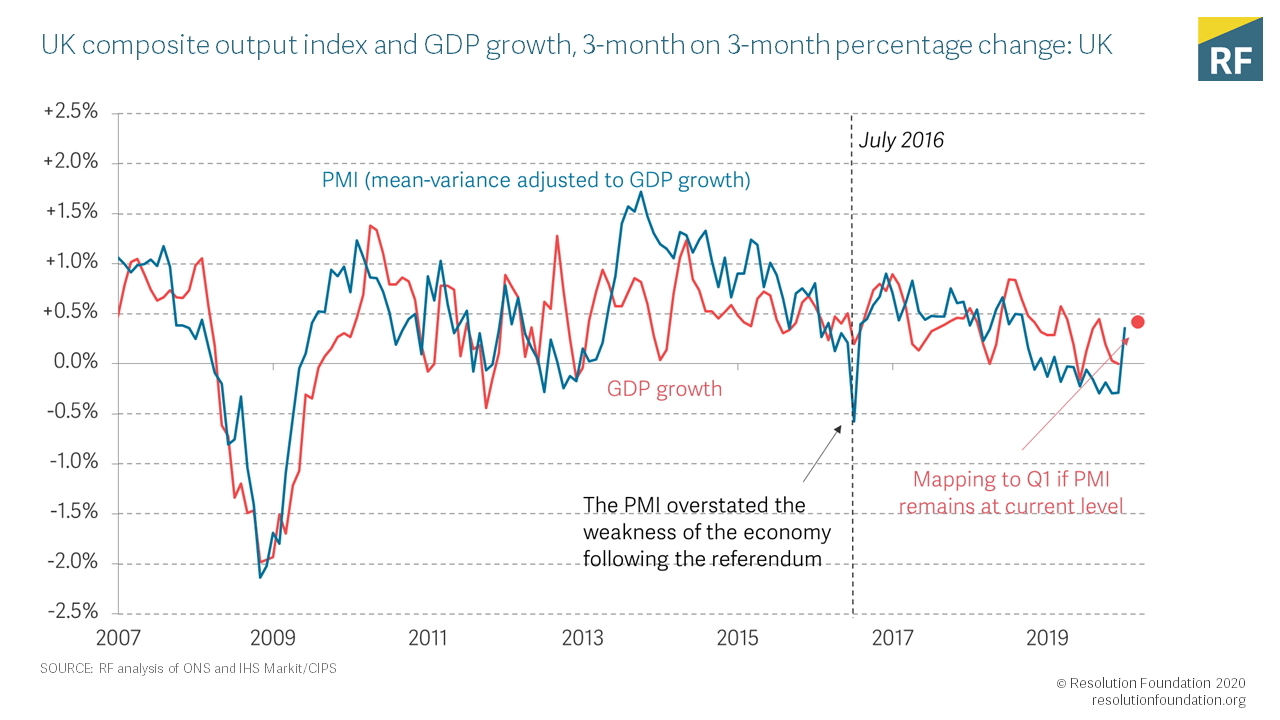 The OBR forecast for GDP looks set to be downgraded

Looking ahead to the Budget, there is particular uncertainty around the OBR’s forecast because this will be the longest gap between official government forecasts in more than 20 years (since 1997). This particularly large gap means there has been more economic news that the OBR has to interpret and incorporate. One reading of the data suggests that the outlook for growth will not be a positive one for the Chancellor. The chart below looks at how forecasts for growth this year have evolved over time. Since the previous OBR forecast (made at the Spring Statement in March 2019), both private-sector economists and the Bank of England have been marking down their forecasts (by 0.5 percentage points and 0.7 percentage points, respectively). However, the OBR was more pessimistic than those other forecasters in the spring of last year, suggesting that the slow growth of the past year will have come as less of a surprise. 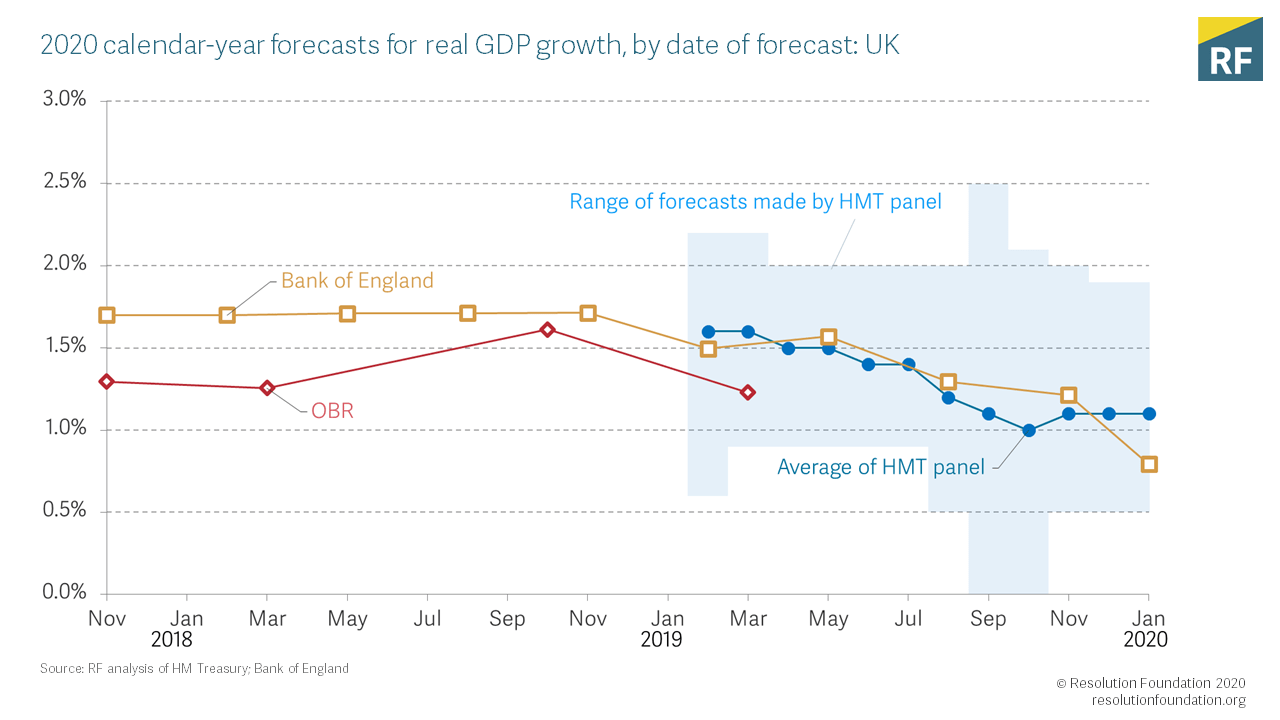 Potentially more important for the Chancellor than the exact size of the GDP downgrade, it should be noted that other macroeconomic effects such as lower interest rates and inflation should mitigate the negative effect of a slower-growing economy on the public finances.

Following the election, fiscal policy looks set to boost growth for the first time in a decade

With the Conservative manifesto promising £100 billion of extra investment spending over five years, we are now expecting fiscal policy to contribute positively to growth for the first time since the financial crisis. The chart below shows estimates for the size of the boost to growth from macroeconomic policy in recent years. Since the large stimulus to growth from fiscal and monetary policy in the aftermath of the financial crisis, policy has tended to provide a small drag to growth, as the effects of that earlier boost have unwound. But following the election and last year’s Spending Round, the expectation is that fiscal policy will provide the first sustained boost to growth in over a decade (as shown in the scenario to the right of the chart), with the cumulative impact increasing GDP by 1 per cent by the end of 2021. Of this amount, we expect the additional investment spending increase the level of GDP by 1.7 per cent by the end of 2021. This means that absent this additional investment, fiscal policy would be expected to reduce GDP growth over the next two years. The additional investment spending will be a significant change to the stance of policy and should help to support an improved growth outlook. 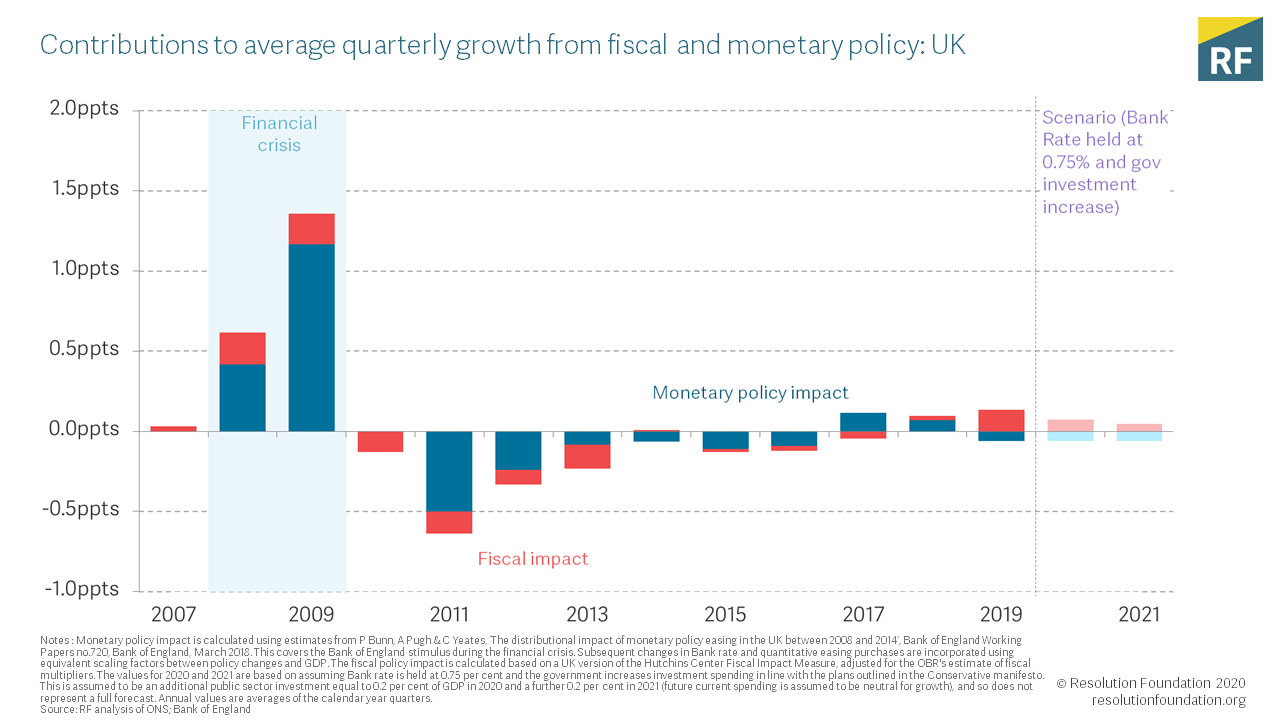 Overall, then, our view is that, while the OBR is unlikely to be making the biggest downgrades to its economic growth forecasts compared to some previous revisions, downgrades will still be the order of the day. But it will not only be forecasts that change, with a marked change in policy on capital spending meaning fiscal policy is set to move from its position of dragging on growth for most of the past decade, to boosting it. Looking further ahead, a sustained improvement in the economic outlook would require the boost from fiscal policy to be accompanied by further reductions in uncertainty and improved household sentiment.