While incomes have stagnated over the past decade, our national wealth has continued to boom. Data released today put UK households collective wealth at £14.6 trillion. But that total is far from equally distributed: the richest 10 per cent of households own almost half of the nation’s wealth having benefitted most from the recent wealth boom. In contrast, typical households in parts of the North and the Midlands are still no wealthier than they were before the financial crisis.

We have had an early Christmas present from the ONS – new data on wealth in the UK from the Wealth and Assets Survey (WAS). But, unlike Christmas, this only comes along once every two years. The new data gives us the best available picture of wealth in the UK, and there’s a lot to learn. Here are nine key take-aways from the new data.

1. Total wealth has continued to surge relative to national income.

Back in the 1970s, the total amount of wealth held by households in Britain was around three times GDP. Today’s data shows that it’s now more than 7 times, the highest such ratio in over 100 years. This increase has been driven in part by low interest rates. Compared to 2006-08, when the WAS was first collected, the amount of wealth in the country has increased from 5.5 to 7 times national income. In that time typical household incomes have increased by just 6 per cent in real terms from 2006-08 to 2016-18, while typical household wealth has gone up by 18 per cent.[i]

Figure 1: Wealth has grown much faster than national income 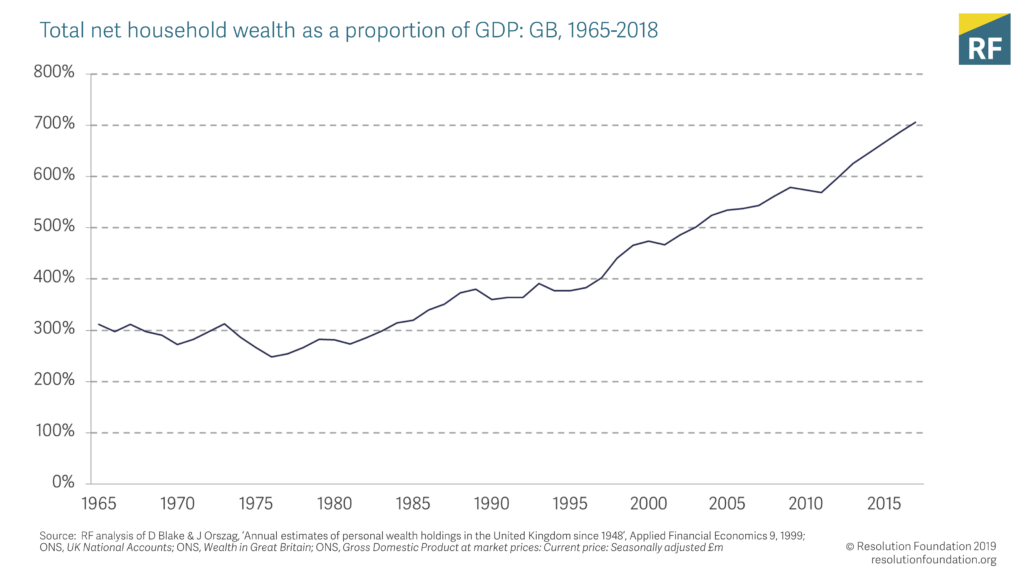 2. Pensions are the largest and fastest-growing category of wealth.

Private pension wealth is the largest component of household wealth, marginally bigger than total property wealth, and its value has increased by more than that of property wealth too. This reflects a slight cooling in the housing market, while the valuation of pension assets has been pushed up by rising longevity and continued low interest rates (affecting defined-benefit schemes), and more people being auto-enrolled into workplace pensions.

Figure 2: Pensions are the largest component of household wealth 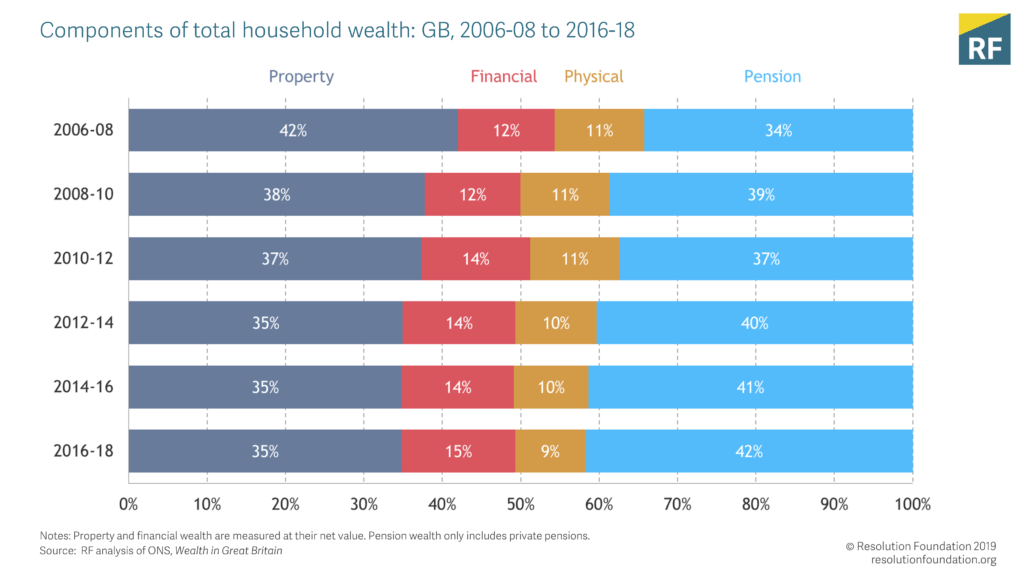 Britain may be wealthier than ever as a country, but that wealth is still very unequally shared. The fall in wealth inequality over the 20th century is over. Wealth is twice as unequally distributed as income, as measured by the Gini coefficient. This coefficient measures inequality on a scale from 0 to 1, where 0 is perfect equality and 1 is perfect inequality (a situation where one person has all the wealth).

Looking at the major categories of wealth one by one, property wealth is the most equally shared, then pension wealth, with financial wealth the most unequal. What is perhaps surprising about these statistics is that wealth inequality has not changed very much over the past decade, measured by the Gini coefficient at least.

Figure 3: Wealth is held much more unequally than income 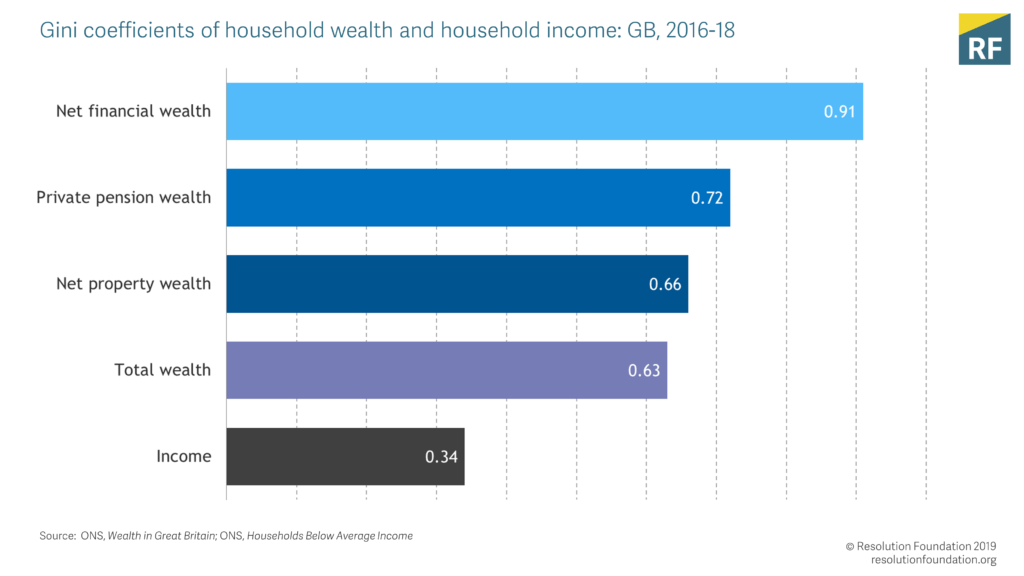 4. Wealth gaps have grown in recent years, even if inequality hasn’t

Wealth inequality may not have changed much in the past few years in Gini coefficient terms, but other sorts of inequality matter too – and they have changed. The gap between high-wealth and low-wealth households has widened even as relative inequality has stayed still. The real gap net wealth between typical households in the top and bottom wealth deciles has grown from £1.9 million in 2006-08, to £2.5 million in 2016-18. Nowadays wealth plays a much larger role in determining people’s living standards than in decades past, because there is so much more of it.

Figure 4: Absolute wealth inequality has surged over the past decade 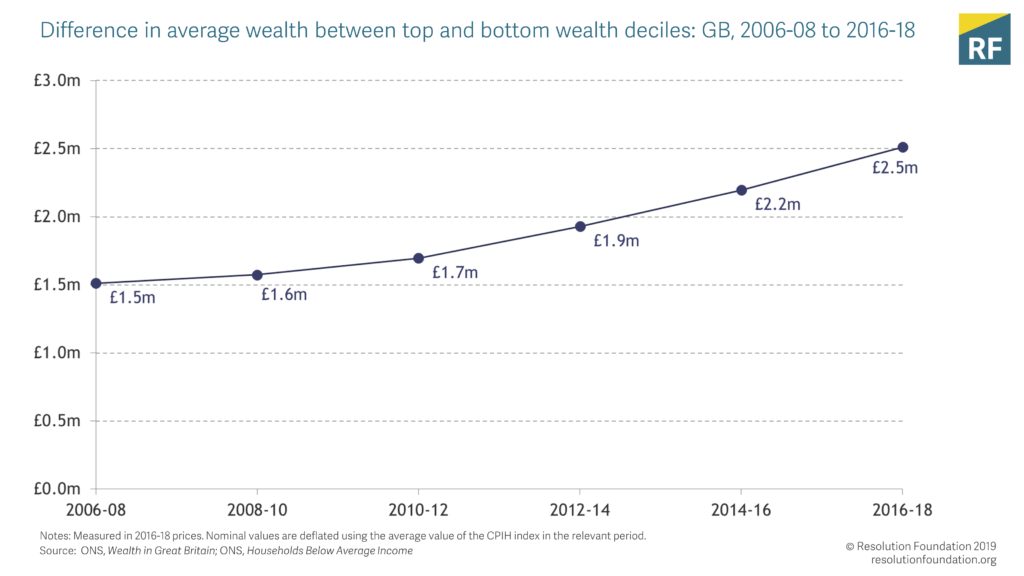 5. It’s now much harder to earn your way to high wealth

Fifty years ago, someone with a good salary could save enough over the course of their lives to retire with a good amount of wealth to live off. For many people today this is a distant dream: what matters more is the wealth you inherit or marry in to, rather than the income you can set aside over a working lifetime.

A middle income family on just over £26,000, for example, would have to save everything for 96 years if they were to reach the wealth of a household in the top 10 per cent of the wealth distribution (whose average wealth is £2.5 million). Even a family just inside the top tenth of the income distribution would have to save for 50 years, making it unrealistic that even the highest-paid can accumulate large amounts of wealth without windfalls from outside.

Figure 5: Earning your way to high wealth is very difficult 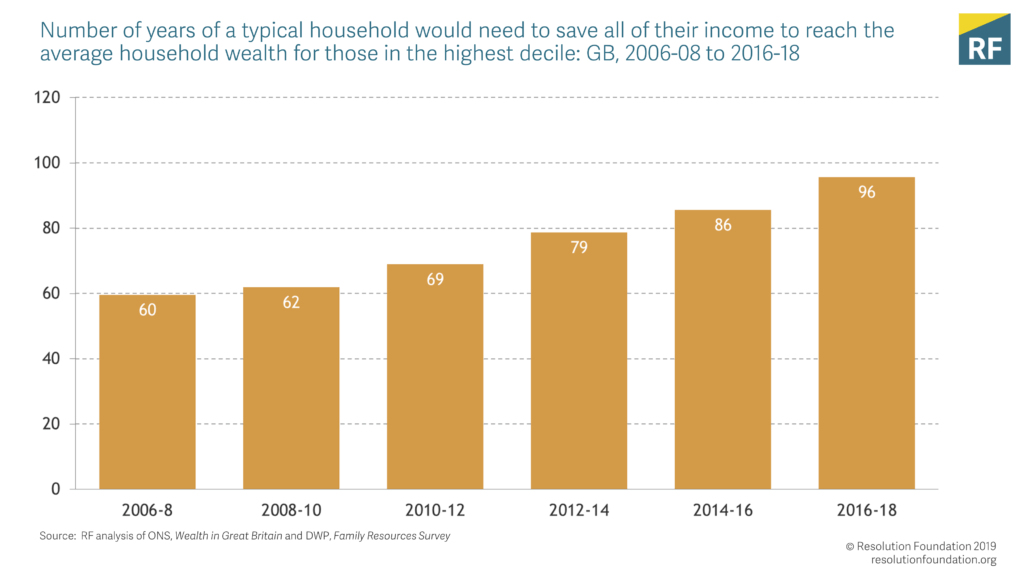 Households build up wealth for many reasons, but a key one is to help smooth consumption over time and insure against risks like income loss and unforeseen costs in retirement. As such, we might worry less about income inequality if low-income households have sufficient wealth to provide this insurance. The facts, however, suggest otherwise. Households’ wealth holdings are closely correlated with their income, which means that those most exposed to the negative consequences of falling income tend not to have savings to fall back on. 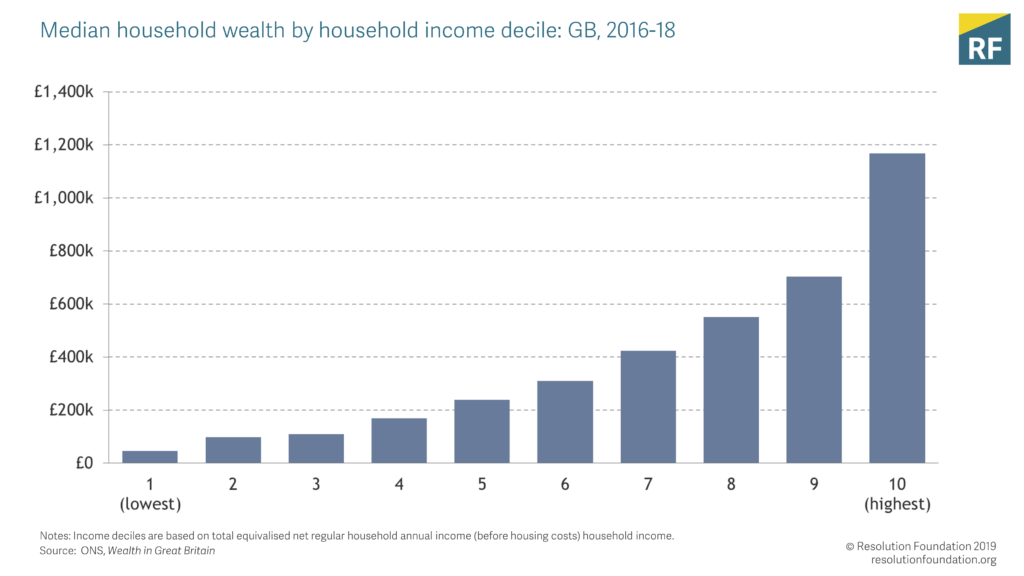 7. Regional gaps in wealth have been widening

During the boom in national wealth in recent years, some regions have fared far better than others. Typical wealth in the North East, East Midlands and West Midlands has actually fallen over the past decade, after adjusting for inflation. In sharp contrast, it has rocketed in London, the South East and Scotland, with rapid house price growth in the South East driving much of the change.

Figure 7: London and Scotland have pulled away from other regions 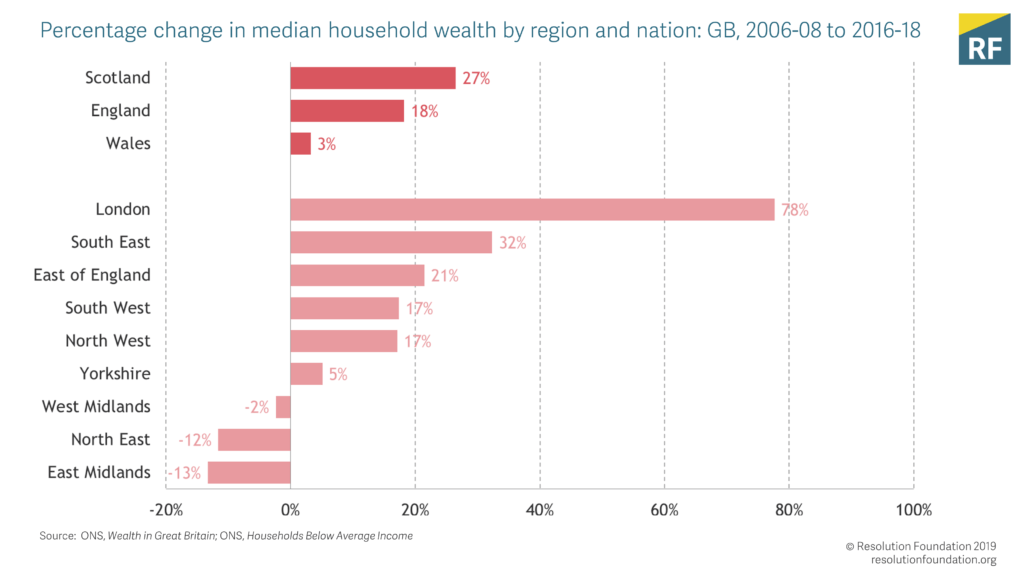 Most individuals naturally build up wealth over the course of their working life, before using this wealth to support their living standards in retirement. But the wealth gap between the age group where wealth tends to peak – that is, 55-64 year olds – and other groups has been increasing. Indeed, in 2006-08 the proportion of individuals living in a household with wealth below £500,000 was 26 percentage points higher for those aged between 35 and 44 compared to those between 55 and 64. This gap rose to 34 percentage points by 2016-18.

This increasing gap reflects the fact that the relatively well-off cohort born in the 1950s has been able to accumulate wealth at a faster pace than the generations before or after. This has been due to increased homeownership and relatively generous pensions for many of the individuals in this group. 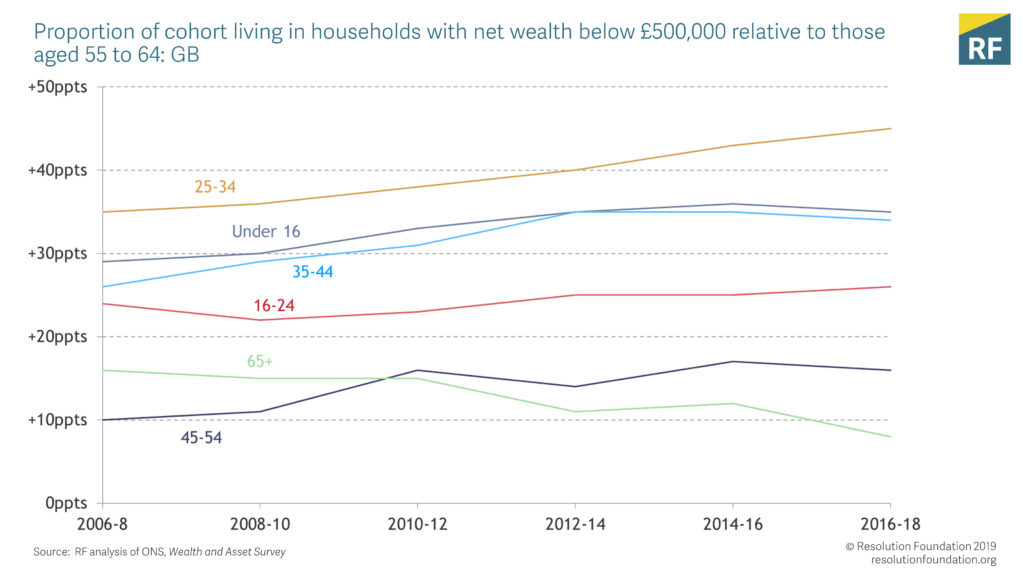 9. Wealth is heavily under-taxed, given how much it has grown relative to income

Britain is still adjusting to the new world of abundant wealth. We know far more about the scale and distribution of national wealth than we did at the turn of the millennium, but the political debate about wealth still hasn’t caught up.

A consequence of this slow-moving debate can be seen in the content of the party manifestos at the 2019 General Election. Despite a general consensus building that we have reached the end of a long era of tax cuts – all the main parties published tax-raising manifestos – politicians are not yet coming clean with the public about what sorts of taxes might have to rise in the future in order to maintain the generosity of the welfare state. As Figure 9 shows, wealth taxes have remained stubbornly flat in recent decades, not increasing their revenue at all despite the huge rise in the amount of wealth held by households. This topic is one we think is essential for policymakers to get their heads round, so the Resolution Foundation is launching a new three-year research project on wealth in early 2020, in partnership with the Standard Life Foundation.

Figure 9: Wealth taxation has not risen has fast as increasing wealth 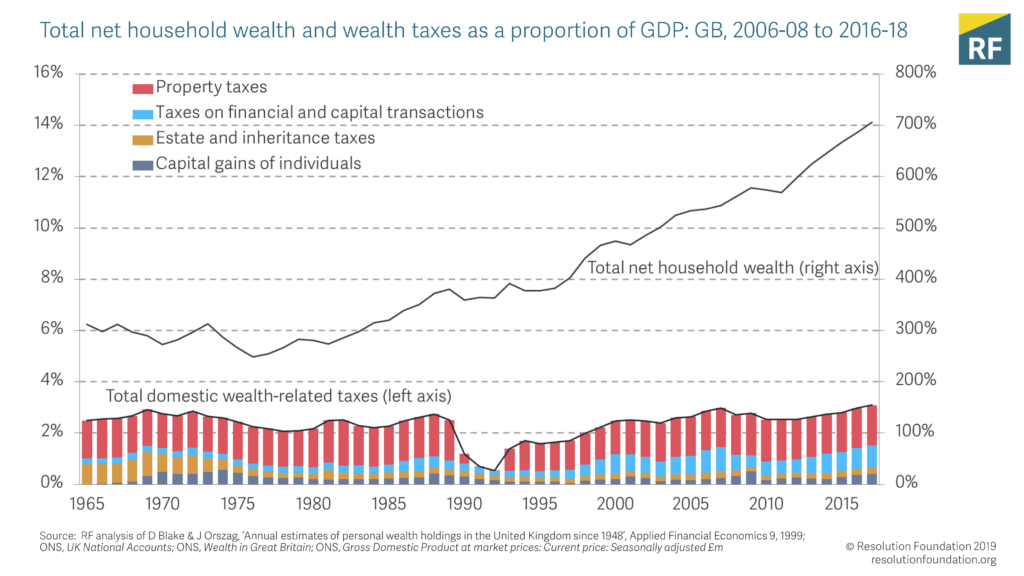 [i] We refer here to median household income before housing costs, adjusted for inflation with CPIH, and measured with the Family Resources Survey.