The new Chancellor has rewritten UK economic policy in order to reduce the pressure on the Bank of England to raise interest rates and the Treasury to deliver spending cuts. He has now reversed 60 per cent of the tax cuts announced less than four weeks ago and committing to scale back support for energy bills after April 2023. Jeremy Hunt not only reversed the majority of the mini-Budget tax cuts, but also scrapped Rishi Sunak’s 1p cut to the basic rate of Income Tax. This alone saves almost £6 billion a year, and confirms this is a tax-raising rather than tax cutting Parliament.

U-turns since it was first announced have reduced the size of the mini-Budget tax cut next year for the typical household from £500 to £290, driven by the scrapping of the rise in National Insurance. For the richest 10 per cent of households, the change is dramatic with tax cuts reduced from £5,380 to £1,650. Taking the parliament as a whole, it is clear that taxes are rising, driven by the freeze on income tax thresholds. Taxes as a share of GDP are on course to rise to around 36 per cent by the end of the parliament – up from 33 per cent at the start and the highest sustained level since 1950-51.

The Chancellor has also said that the Energy Price Guarantee (EPG) will now end next April, 18 months earlier than originally planned. This could save the Treasury up to £40 billion next year, at the price of allowing typical annual bills to rise to £4,000 next April Significant pressure is now on the Treasury review to come up with a more targeted – and cheaper – successor for the EPG.

These huge policy changes are intended to reduce the pressure on Bank of England to raise interest rates, thereby reducing the Government’s borrowing costs. If he is successful, it will mean that the Treasury will have to do less by way of public spending cuts in order to ensure that debt is falling in the medium term, the Government’s stated aim for the public finances. Nonetheless, the new Chancellor remains on track to announce public spending cuts in order of tens of billions of pounds when laying out the government’s medium-term fiscal plans on 31st October. With those spending cuts to find, and a new energy support package to be devised, many of Jeremy Hunt’s toughest choices still lie ahead.

Another huge U-turn as Government scrambles to regain fiscal credibility

In his fourth day in the job, Jeremy Hunt announced a reversal of around 60 per cent of the tax measures announced in Kwasi Kwarteng’s mini-Budget of 23 September. On top of Friday’s reversal on the £19 billion cut to Corporation Tax, he announced the Government would no longer: repeal reforms to IR35 (off-payroll working rules, raising around £2 billion a year); introduce a VAT-free shopping scheme for tourists (£2 billion); cut dividend tax by 1.25 percentage points from April 2023, (around £1 billion); or freeze alcohol duties from 1 February 2023 (£600 million).

But the new Chancellor didn’t stop at reversing the mini-Budget tax cuts: he also scrapped Rishi Sunak’s 1p cut to the basic rate of Income Tax, saving almost £6 billion a year. Overall since the mini-Budget, the Government has announced £32.3 billion in tax-cut reversals, which on its own – when compared to full fiscal event – would be the largest tax-raising fiscal announcement since 1993, narrowly beating Rishi Sunak’s Spring Budget 2021 which contained around £29 billion a year of tax increases.

Figure 1: The Chancellor’s short statement was the biggest tax rise announcement since 1993 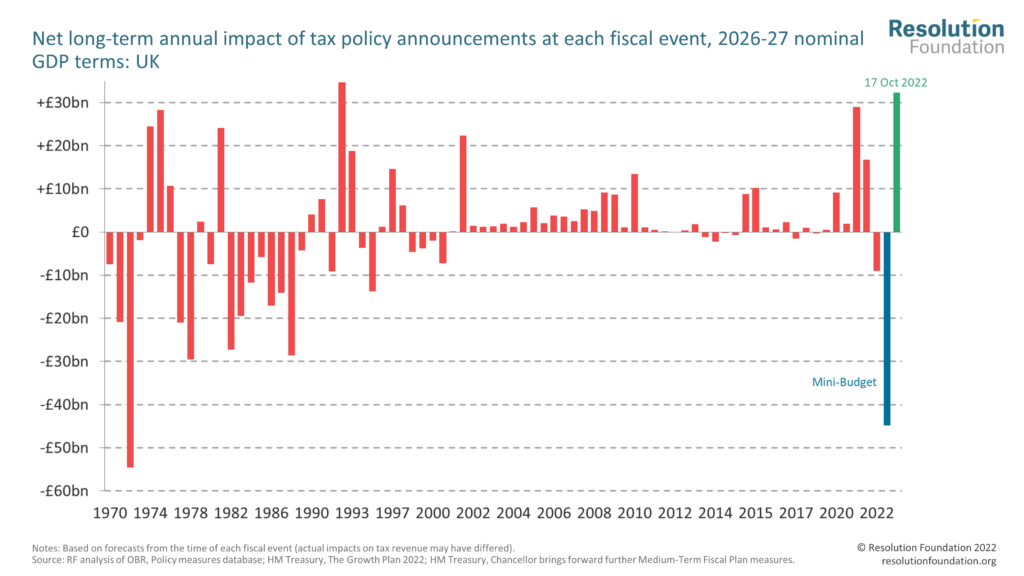 Looking at personal taxes, this is clearly a tax raising Parliament

The decisions this Autumn are now a far less-generous tax giveaway. For a typical household, the various U-turns since 23 September have reduced the size of the personal tax cut next year from £500 to £290, which relates to the scrapping of the Health and Social Care Levy.[1] For the richest 10 per cent of households, the change is much larger: tax cuts have been reduced from £5,380 to £1,650.

The latest U-turns also mean all permanent tax and benefit changes announced over the course of the parliament will now do more to push down on household incomes, and do so in a more progressive way.

Figure 2: Three weeks of U-turns have slashed the majority of the tax cuts from the original Growth Plan 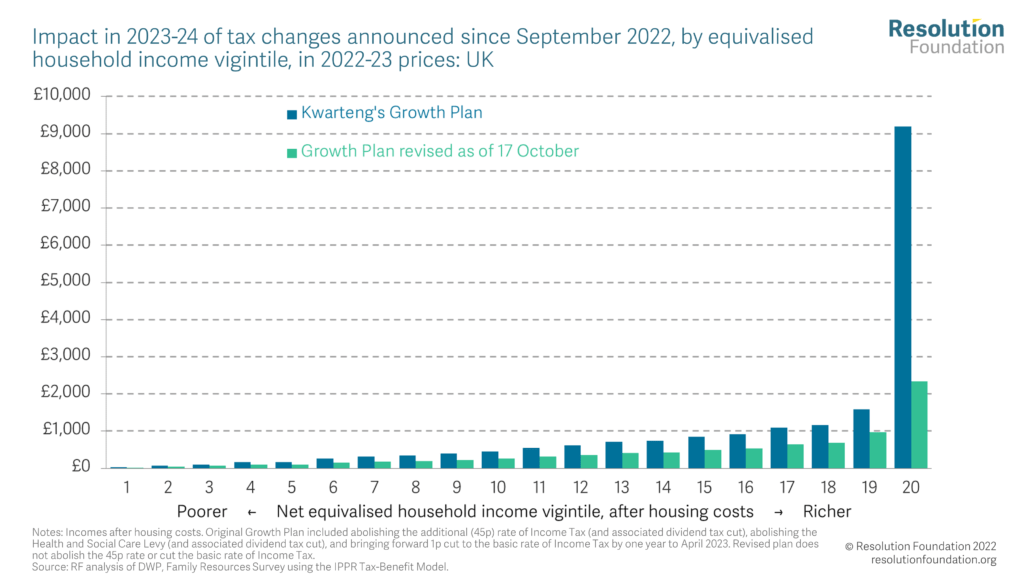 As Figure 3 shows, the typical household in 2025-26will see their incomes fall by £1,000 as a result of personal tax and benefit changes announced during this parliament, compared to £780 at the time of the mini-Budget. The richest 5 per cent of households will now see an average income loss of £4,330, compared to gains of £2,520 after the mini-Budget (with the largest change coming from the – now scraped – abolition of the additional, 45p, rate of Income Tax). It is worth remembering that the vast majority of the tax rise is due to the freezing of the Income Tax Personal Allowance for 4 years, first announced in March 2021. At the time, this would have cost the typical household just £320 per year by 2025-26, but higher forecast inflation now means this change will cost over four times more than this (£1,420).

Overall, the tax take is now heading to its highest sustained level in 70 years

Having promised to reduce taxes, the Government is now returning taxes to a rising path relative to GDP, with the share projected to rise to around 36 per cent by the end of the parliament, up from 33 per cent at the start (Figure 4). This would bring the UK’s tax take up to its highest level since 1950-51, reflecting long-term pressures for more public spending, as well as the goal to get debt falling as a share of GDP.

Figure 3:  Income Tax threshold freezes and other tax and benefit changes this Parliament leave the typical household worse-off by £1,000 per year 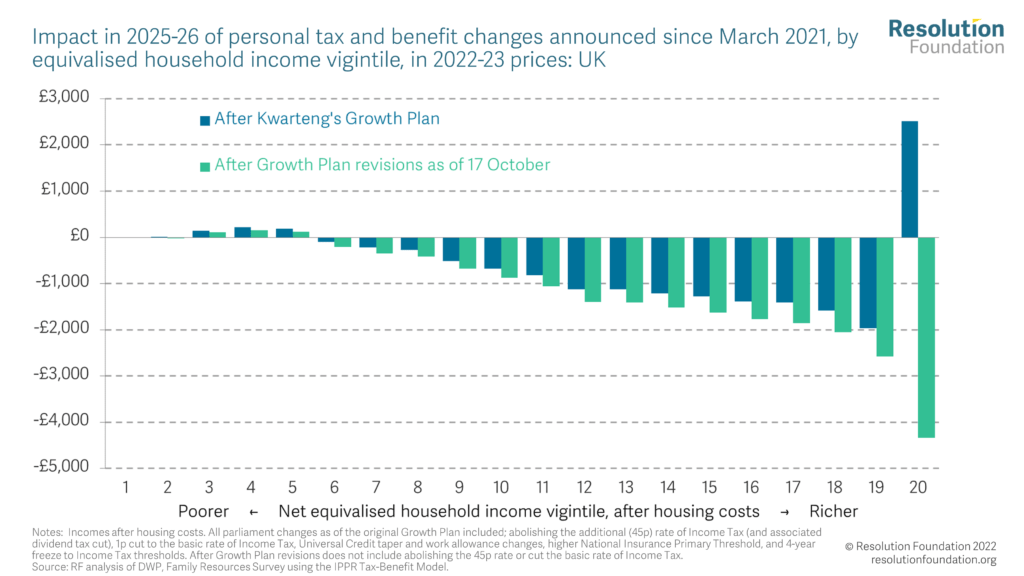 Figure 4:  With most of the mini-Budget’s tax cuts reversed, taxes are projected to rise to their highest levels in over 70 years relative to GDP 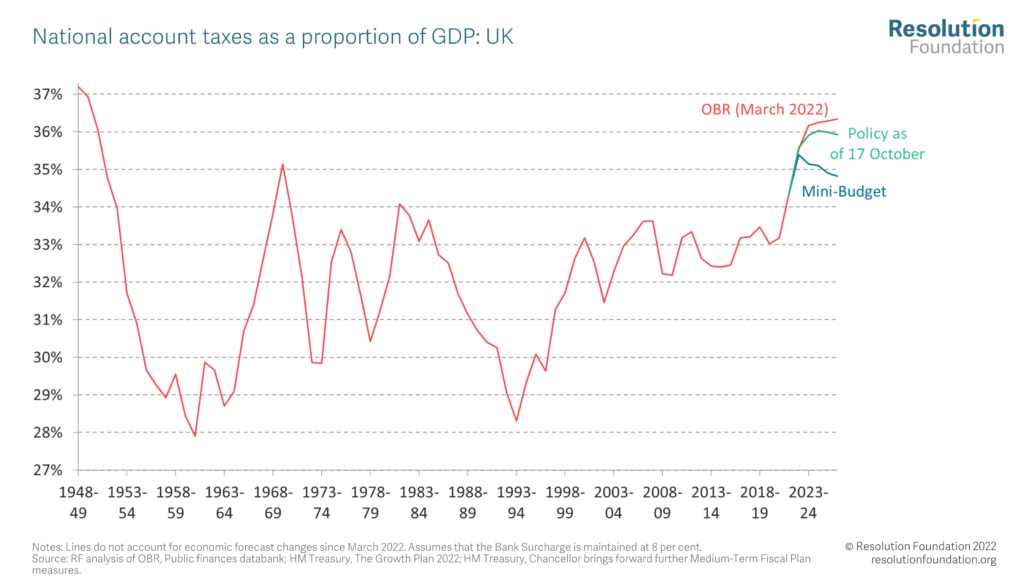 The Chancellor has also said that the Energy Price Guarantee (EPG) will now end next April, 18 months earlier than originally planned. This could save the Treasury up to £40 billion next year, at the price of allowing typical annual bills to rise to £4,000 next April (on the basis of current wholesale gas prices and the Ofgem price cap returning to effect).[2]

As Figure 5 shows, typical bills reaching such highs would be in stark contrast to historical levels of household expenditure, being entirely unaffordable for millions of households, especially those on low incomes and with high energy use. As such, significant pressure has been placed on the announced Treasury review to come up with a more targeted – and cheaper – successor for the EPG. 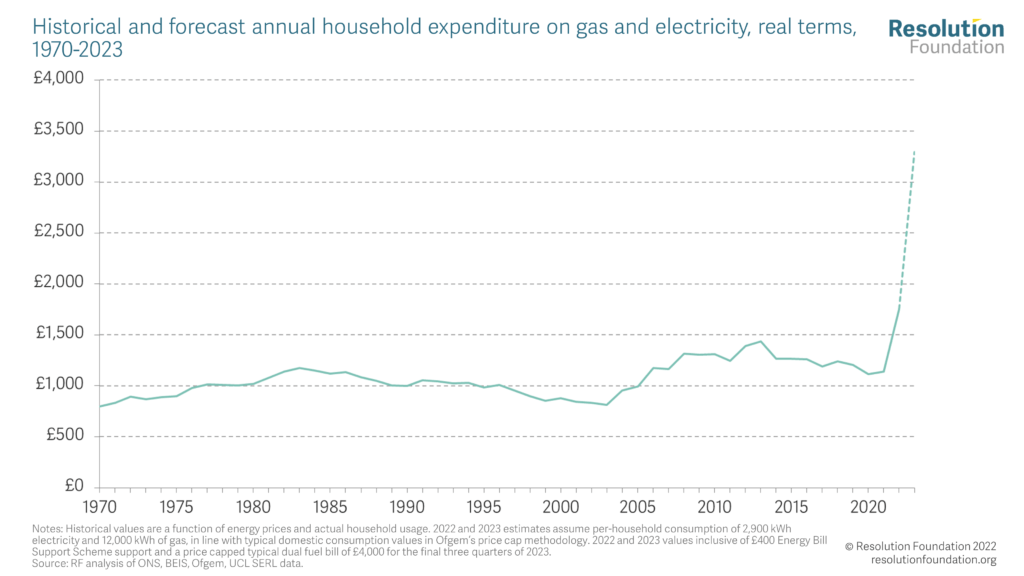 The Government is hoping that by reversing tax cuts it can bring down borrowing costs, reducing the scale of the spending cuts needed to balance the books

The huge reversals in policy announced by Jeremy Hunt show the priority being placed on reducing pressure on the Bank of England to raise interest rates. By reducing the size of the unfunded tax cuts and the EPG, the Government is reducing the amount of fiscal stimulus it is pumping into the economy. This should reduce some of the upward pressure on inflation in the coming months, reducing the need for the Bank to increase interest rates. This in turn will feed into lower borrowing costs for the Government, reducing the scale of spending cuts to be announced on 31 October. If today’s announcements calm the market and reduce interest rates by 0.5 percentage points on a lasting basis (yields on benchmark 10-year gilts fell by around that amount this morning), this would reduce borrowing costs by a further £8.1 billion according to the OBR’s ready reckoners, adding significantly to the £32 billion of lower borrowing from the U-turns announced since the mini-Budget.

Despite this, either further tax cuts, or – more likely – large spending cuts are still likely to be needed to ensure the public finances are put on a sustainable footing. Given the size of the fiscal hole facing the Government, today’s measures will reduce rather than eliminate the spending cuts set to be announced on 31 October. Cuts totalling tens of billions of pounds are likely to need to be announced if the Government is to meet its stated aim of having debt as a share of GDP falling in the medium term.

[2] Forecast energy costings based on wholesale gas futures curve data on 14 October, the last full day of trading before the Chancellor’s announcement. These show monthly NBP gas contracts for the 2023-24 financial year comprising an average of 377 pence per therm. An annual cost was calculated from the difference between these NBP contracts and the ‘supported price’ of £75 per megawatt hour (equivalent to approximately 215 pence per therm) provided by Government for the non-domestic Energy Bill Relief Scheme. While no comparable figure has been provided for the domestic Energy Price Guarantee this ‘supported price’ roughly equates to a price cap level of £2,500. Estimations of a summer 2023 price cap were made using the same NBP forward curve, and assuming that other bill components are held constant. Additionally, it is assumed that the costs of environmental and social levies are reinstated on energy bills following the expiration of the Energy Price Guarantee.