Fiscal rules are crucial for the government’s stewardship of the public finances and framing its economic priorities. So it is welcome that the main parties have prioritised setting out the rules they would follow, with their announcements following to different degrees the approach recommended by earlier Resolution Foundation work. But fiscal rules are only useful if they are credible and adhered to. This analysis takes as its starting point those rules and asks whether the policy platforms announced by the main parties in and around their manifestos are consistent with them.  Our  concerning conclusion is that the Conservatives, and particularly Labour, already look highly likely to be on course to break the rules they announced less than a month ago.

Within ten days of the dissolution of parliament, the main parties had announced the fiscal rules that would guide their tax and spending decisions after 12 December.

It is encouraging that this was a high priority. And the rules announced showed an admirable degree of innovation, drawing heavily on recent proposals by the Resolution Foundation’s Macroeconomic Policy Unit. But while it’s one thing to set out new fiscal rules, it’s another to stick to them. So now we have the parties’ manifestos, below we provide an evaluation of the extent to which the main parties would be on course to meet their rules following commitments made in their manifestos and other announcements. This matters a lot because failing to meet their own rules at the first opportunity would be damaging to the UK’s economic credibility at a time when it is being tested on a number of fronts. And while the parties’ own manifestos provided welcome detail on the fiscal implications, with all parties insisting they are on course to meet their fiscal rules, it is important to scrutinise such claims from the bottom up. Unfortunately, the key takeaway from this analysis is that both the Conservatives, and particularly Labour, already look highly likely to be on course to break their new rules before the ink is even dry on them.

New rules: a mixture of the familiar and the novel

The fiscal rules announced by both main parties were a mixture of the familiar and the novel (Figure 1).The familiar element of both fiscal frameworks is a commitment to balance the current budget (Rule 1 below). The principle of only borrowing to invest and paying for day-to-day spending by collecting taxes has featured in three out of five UK fiscal regimes over the past 20 years. Here the difference between the parties is how quickly they will get there: the Conservatives are promising three years; Labour say it will take five. To keep overall levels of borrowing sustainable, both parties have adopted a novel second rule capping the ratio of debt interest payments to revenue (Rule 2). While such a rule is common at local government level, the UK would be the first country to adopt such a rule at the national level. For the Conservatives, an increase in the net interest/revenue ratio above 6 per cent triggers a rethink of their investment plans, with the application of a rule to reduce debt over the parliament. For Labour it is a hard ceiling of 10 per cent. Finally, both parties have a target to inform their investment plans. From here the two frameworks part company, with the Conservatives including an additional limit on net investment at 3 per cent of GDP on average over the course of the next parliament. By contrast, Labour’s opts for a third rule which takes account of developments on both sides of the balance sheet by committing to improve overall public sector net worth (total assets minus total liabilities) as a share of GDP over the parliament. If adopted, this would make the UK one of only three countries in the world (alongside Australia and New Zealand) to set a fiscal target expressed in balance sheet terms. 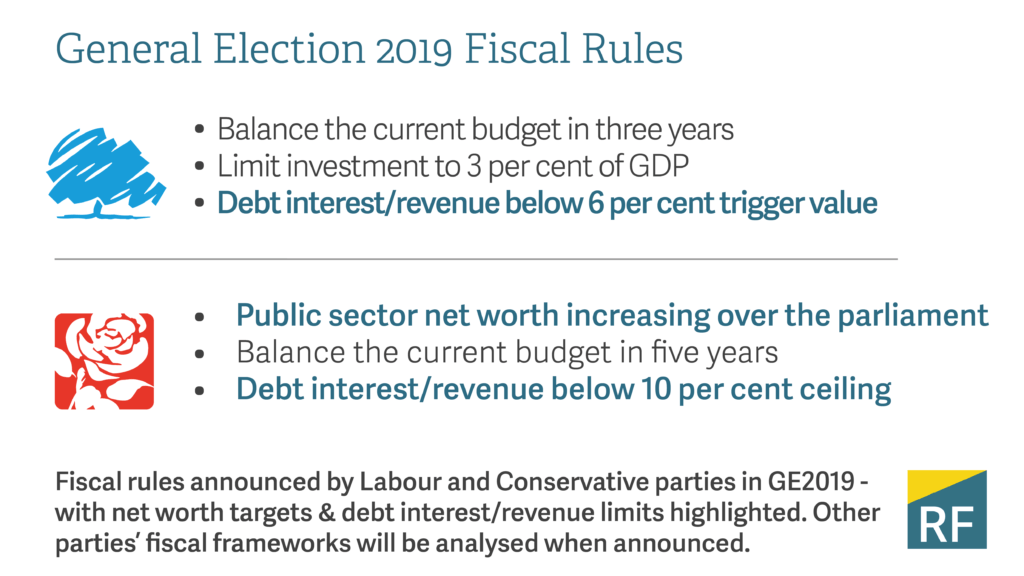 Factoring in their outcome of the 2019 spending round and modest tax cuts and spending rises included in their manifesto, the Conservatives have very little room for manoeuvre against their current budget balance rule. Indeed, the manifesto left only around £5 billion of headroom against that rule in the target year of 2022-23 (Figure 2). In this context it is important to keep in mind that the economic and fiscal outlooks are inherently uncertain and it is prudent to build in headroom against fiscal targets. Previous Chancellors have given themselves between £10 and £26 billion of headroom against their achievement of their headline fiscal targets when launching a new set of rules. The headroom set aside by the Conservatives in their manifesto is about a sixth of the average forecast error for the current balance over a three-year period (Figure 3). This suggests an 86 per cent chance of the rule being broken based on the experience of previous forecasts.

Figure 2: Both parties’ manifestos suggest only a very small surplus on day-to-day spending 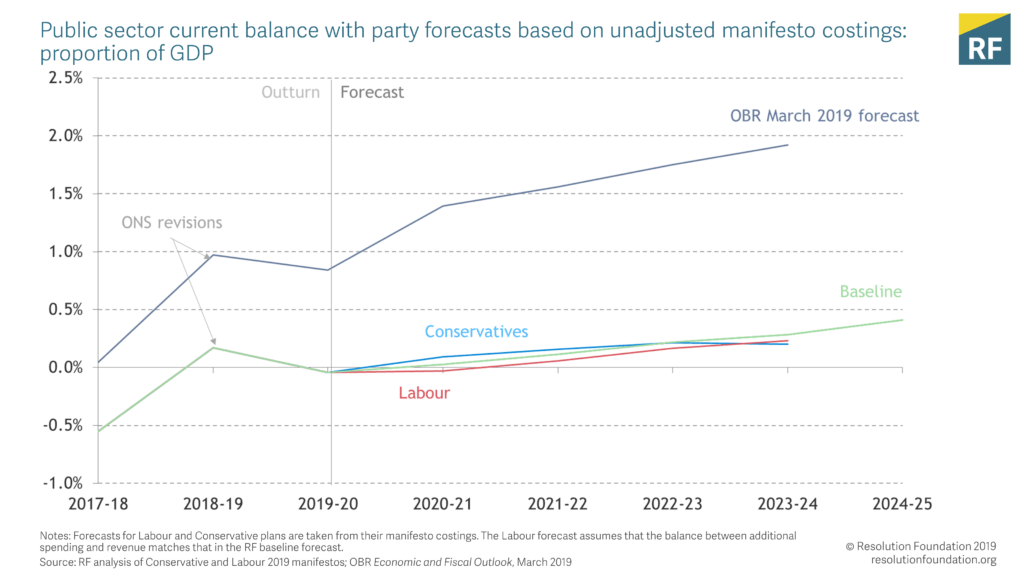 This narrow margin against its current balance rule does not take into account some additional costs that are likely to arise. This is partly because the Conservatives are not accounting for the recurrent costs associated with their new investment plans that impact on the current budget. The additional costs take the form of increased interest payments of £0.4 billion per year, reflecting higher borrowing, and additional depreciation cost of £2.3 billion per year by 2023-24. These higher depreciation costs stem from the additional physical capital created by higher public investment. Moreover, the Conservatives assume no additional departmental expenditure provision beyond that factored into 2020-21 allocations for the additional 12,000 doctors and primary care professionals, 50,000 nurses, 20,000 police officers, or staffing of the 10,000 additional prison places promised in their manifesto. Looking further ahead, the current costings do not include any funding for their £6 billion goal of further increasing the point at which you start paying National Insurance to £12,500. 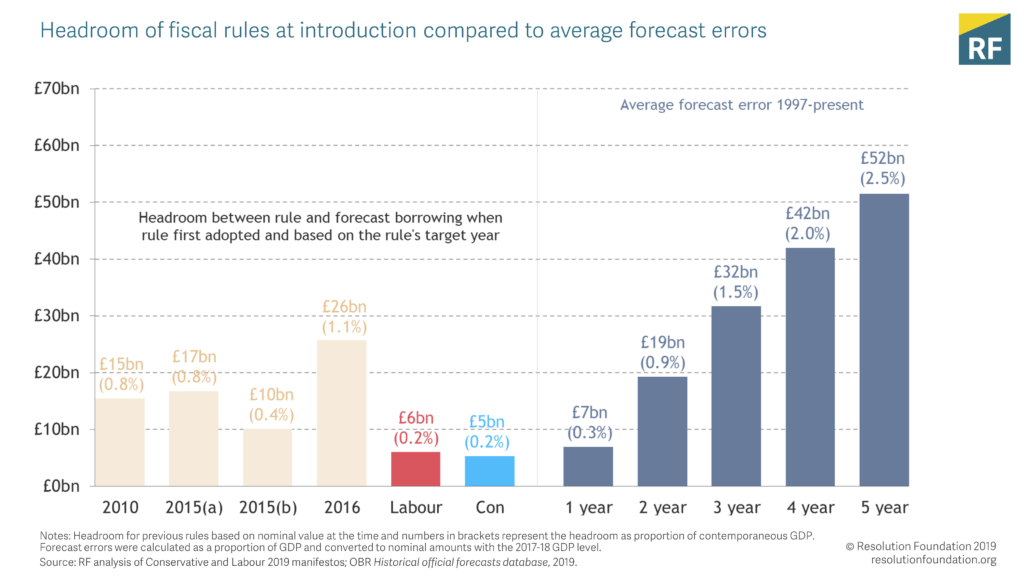 All this means that the narrow headroom that the Conservatives have on their current balance rule is likely to prove even smaller, or non-existent if the party is really committed to further National Insurance cuts or departmental spending, just based on current plans. More significantly, the small margin of error that the Conservatives claim to have would almost certainly prove insufficient given the past pattern of fiscal forecast errors.

The Conservatives’ commitment to reducing debt as a share of national income over the next parliament (triggered if the net interest/revenue ratio rises above 6 per cent) is, by contrast, a much lower bar for fiscal discipline than it might sound. That’s because two-thirds of this reduction is actually delivered by the unwinding of the illiquid assets purchased by the Bank of England’s Term Funding Scheme following the Referendum result (Figure 4). Without this help from the Bank, the Conservatives’ tax and spending plans only deliver a 3 per cent of GDP fall in debt over the next five years. This underscores the problems of judging fiscal performance by looking only at one side of the public sector balance sheet.

Figure 4: A large proportion of the fall in debt is due to action by the Bank of England 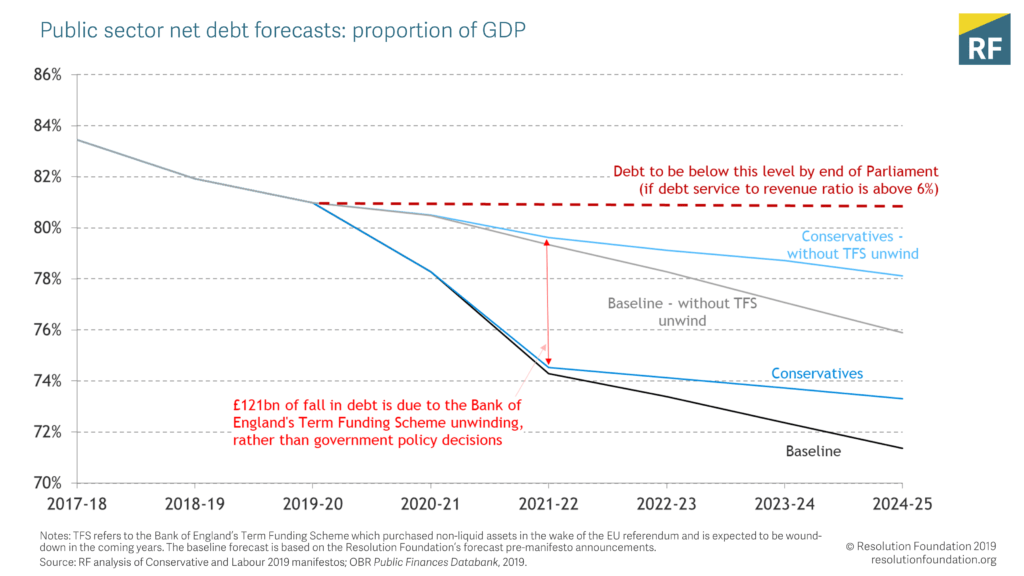 Like the Conservatives, Labour – based on its own manifesto costings – are starting with very little headroom: just £6 billion against its promise to balance the budget in five years’ time. As discussed above, that is, in itself, imprudent given the uncertainty around any set of fiscal forecasts as discussed above. But additional unbudgeted expenditure commitments look set to wipe out all of this headroom in Labour’s case. Mostly obviously, Labour’s manifesto failed to account for the additional £12 billion annual cost from its commitment to compensate women born in the 1950s affected by the increase in the State Pension age. On top of that, the unaccounted for costs associated with Labour’s investment plans mean the headroom Labour argues exists against its current budget balance rule has already been more than used up. While the increases in investment envisaged by all the main parties are very high, Labour’s plans to meet the needs of house building and climate investment are by far the biggest. The rise of £55 billion in public investment would see capital spending rise by 2.4 to 4.1 per cent of GDP by 2024-25, an increase in public investment only topped by Attlee’s post-war increase (Figure 5), when many more industries were nationalised, pushing more investment into the public sector. Our estimates suggest that Labour’s plans entail an additional interest on government borrowing of £1.8 billion each year, and additional yearly depreciation costs of £9.2 billion by 2024-25. 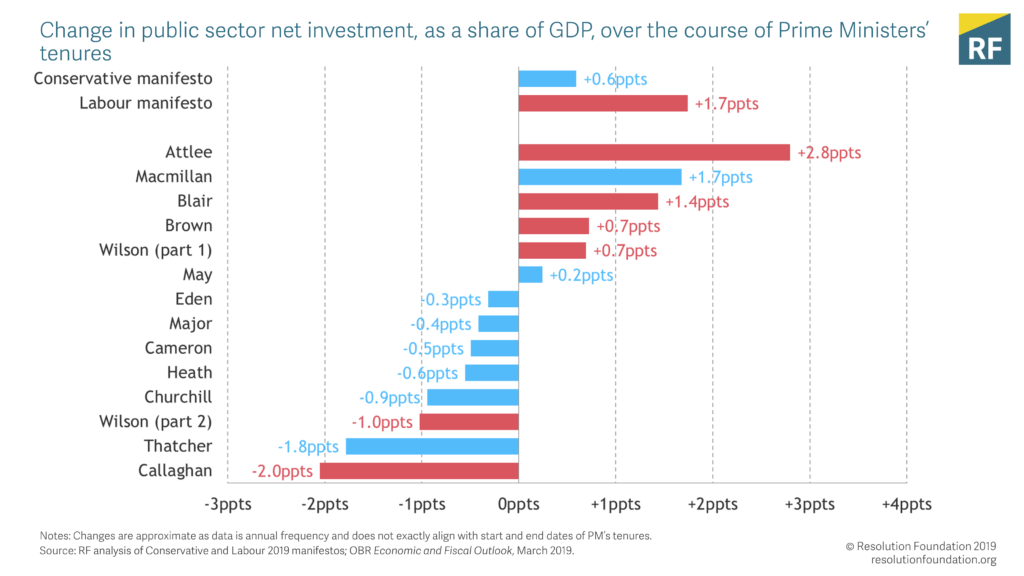 Depending on how their spending, investment, and nationalisation programmes are implemented, Labour may also have less headroom against their net worth objectives than they think. In their manifesto, Labour assume that all of their new investment plans are at least net worth neutral. This is not unreasonable if all investment creates an asset of equal or greater value than the cost of the investment. But around 17 per cent of government investment is currently provided in the form of capital grants to the private sector. These increase private sector net worth, but actually reduce public sector net worth as they do not create any asset in public hands.  One specific example of this type of investment would be elements of Labour’s plans to improve the energy efficiency of private homes via grants. If we assume that the current proportion of capital grants would be the same in Labour’s plans, that would mean that £24 billion of these investments would be net worth reducing. That would point to a high risk that net worth could be falling under Labour’s plans (Figure 6). In addition, Labour’s net worth objective may also be under pressure from their approach to the nationalisation of broadband and other infrastructure assets. Were a Labour government to fully compensate private shareholders for the loss of commercial revenues from these assets but then fail to generate equivalent revenues from these assets once taken into public ownership (as would be the case with free broadband), this would show up as a loss in the public sector balance sheet. This is separate from the running costs which have been included within their day-to-day spending plans.

Figure 6: Net worth could decline under Labour plans depending on how extra capital is spent 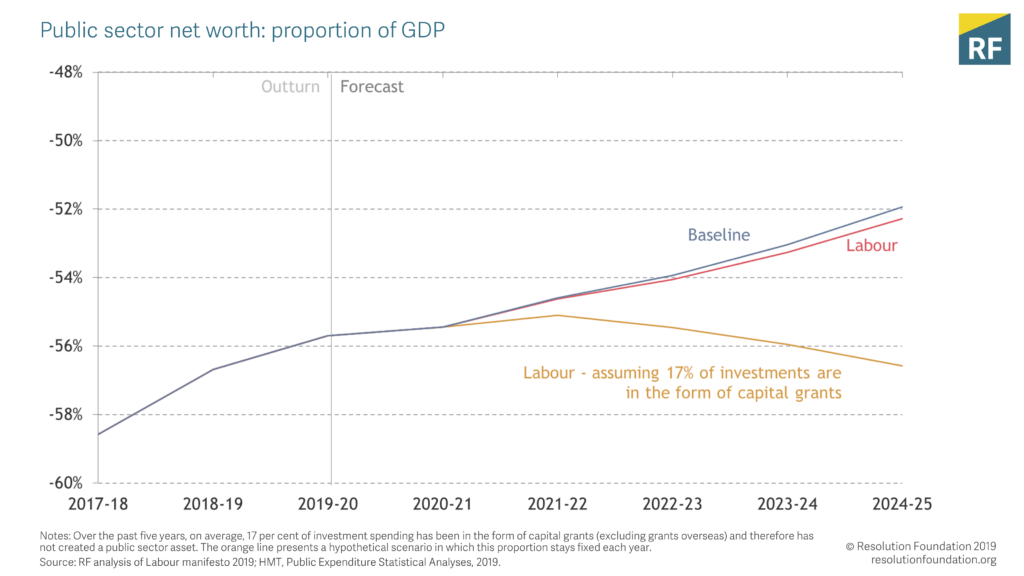 Overall, the main parties’ new fiscal rules have not got off to a promising start

The priority that both main parties have placed on credible fiscal frameworks in this campaign is laudable. Such rules are hugely important for the government’s overall economic priorities. In setting out new fiscal rules, it is vital that they provide a clear framework for sustainable public finances, constraining the temptation for policy makers to promise unfunded giveaways.

It is, therefore, worrying that both the Conservatives and Labour already look likely to be on course to break their new fiscal rules less than a month after their announcement. This position creates difficult choices for the parties – raise taxes further, return to austerity, renege on manifesto commitments or abandon their new fiscal rules at the first hurdle. That whoever forms the government after 12th December may face such choices is a very real prospect given the plans they have set out and given recent deteriorations in the global economic and UK fiscal outlooks.