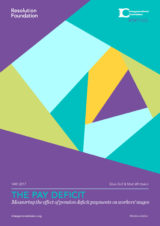 Across the UK economy, the share of overall employee compensation accounted for by non-wage elements such as employer pension contributions has increased substantially since 2000. This increase was driven in no small part by increased payments by employers to plug defined benefit deficits and coincided with a marked pre-crisis slowdown in pay growth, causing speculation … Continued